Controversy
Back in 2008, the CEO, Brenden Eich, of Mozilla, the creator of Firefox, made a $1000 contribution to support California’s ban on gay marriage. However, only as of recent has this public record been discovered and made known to the public and has now created harsh backlash against him and the company. The developing ethical controversy surrounding Eich’s decision is whether or not he should or can keep his personal views out of his business. Many critics, including his own employees and many popular websites believe that he cannot. One such website, a popular dating website called OKCupid, has even been calling for a boycott on Firefox because of this (Etherington, 2014). It has also got the attention of many gay activist groups like GLAAD. Throughout the week, he has stated over and over that he only wants to expand the mission of Firefox and keep his personal views separate. “Internally Mr. Eich has been holding companywide meetings to discuss the issue, defending his views as personal and repeatedly telling employees that Mozilla practices “inclusiveness,” which is often used to note that people within an organization have diverse backgrounds,” (Bilton, 2014). He also made clear that this controversy would not make him step down. He stated, "I am committed to ensuring that Mozilla is, and will remain, a place that includes and supports everyone, regardless of sexual orientation, gender identity, age, race, ethnicity, economic status or religion," (Molina, 2014). However, as of April 3, he did resign as CEO. The large ethical issue here is: Is it ethical to mix personal politics and business? Is it also ethical to support something that discriminates against a group of people, when you are the CEO (and essential representative) of a major company? And lastly, was resigning the best decision he could have made? I will now compare his decision to mix personal politics and his resignation with the various ethical theories to determine whether or not he made the correct decision. 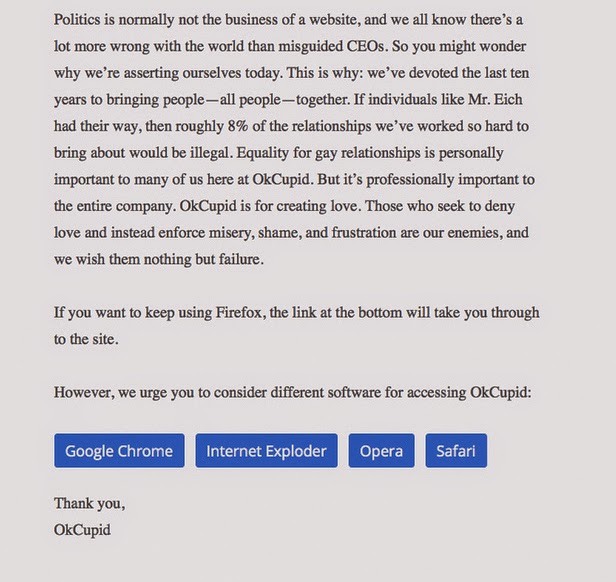 Individualism
Individualism, or Friedman’s economic theory, stated “The only goal of business is to profit, so the only obligation that the business person has is to maximize profit for the owner or the stockholders,” (Salazar, 2014). This means that the ultimate goal of a company is to maximize their profits in any way possible. However, businesses can have other goals that may or may not be directly tied to profiting, but can help profit maximizing in some way. In this case, Eich’s mixing personal politics was not ethically right because by allowing his own personal politics to get involved with his business, he is harming the company’s profits. There was a large backlash over his support of the gay marriage ban and many decided to not only make their opinions known but also boycott as well. “More than 70,000 people have signed a petition asking for Eich to resign if he can't unequivocally say he supports marriage equality,” (Shankland, 2014). This harshly goes against the company’s reputation which is correlated to their profits. If a company has a bad reputation, people will not associate with that company or use their services that they provide. By stepping down, he did act ethically right, because it was the only way to salvage the company’s reputation. By no longer being the CEO of the company, he is allowing the company a fresh start and an “out” to salvage their reputation and make profits once more.


Utilitarianism
Utilitarianism states, “Happiness or pleasure is the only things of intrinsic value. We ought to bring about happiness and pleasure in all beings capable of feeling it (and do so impartially). This is because if happiness is valuable, there is no difference morally-speaking between my happiness and yours,” (Salazar, 2014). This means that the best way is the way that brings the most happiness to the greatest amount of people since there is no difference between two people’s happiness. In this case, Eich’s mixing personal politics was not ethically right because it discriminated against a large group within the country and harmed his company (which affects everyone who works for it). Approximately 4% of California’s population belongs to the LGBT community which means that he essentially supported the discrimination of 1,490,158 people. This certainly is not bringing happiness to a large group of people. He also created controversy for the company which negatively affects the employees’ working environment and could affect their jobs. If their reputation continues to be negatively affected, as well as profits, they will soon have to let people go, to cover their losses. This means that not only the people he is discriminating against are not happy but he is also creating unhappiness for his own employees. By stepping down, he made the ethically right decision because it no longer negatively affects others, including LGBT members and his employees, that the CEO of a major company supports a ban on gay marriage.
According to Kantianism, “You should act rationally – don’t act inconsistently in your own actions or consider yourself exempt from rules. Also, allow and help people to make rational decisions. Next, respect people, their autonomy, and individual needs and differences. Lastly, you should be motivated by Good Will, seeking to do what is right because it is right,” (Salazar, 2014). Essentially you should allow others to make their own rational decisions but help them to make the morally right decision by respecting their diversity and individual needs. In this case, Eich did not make the worst ethical decisions because he did not force his views on anyone and even after the controversy broke, he encouraged his employees to think for themselves and to have their own personal beliefs, separate of the company. Geoffrey MacDougall, Mozilla’s head of development supported Eich’s statements by stating, “The free speech argument is that we have no right to force anyone to think anything. We have no right to prevent people from pursuing their lives based on their beliefs. That what matters is their actions. And as long as they act in the best interests of the mission, as long as they don't impose their beliefs on those around them, they are welcome,” (Hu, 2014). He truly believed that Eich did not impose his own beliefs on his employees or anyone else; therefore, he did nothing ethically wrong. Ultimately, because Eich did not impose his personal belief on others, he did not make the totally ethically wrong decision.

Virtue Theory Lastly, according to Virtue Theory, “There are certainly virtuous traits in business that those in business should follow: Courage, or having risk-taking and willingness to take a stand for the right ideas and actions; Honesty, or in agreements, hiring and treatment of employees, customers and other companies; Temperance, or reasonable expectations and desires; Justice, or hard work, quality products, good ideas, fair practices.” People should behave virtuously or should be inherently good because they want to get better in life or fulfill their purpose in life. In this case, whether or not you believe him to be ethically right is very subjective. It is tricky because people will involve their own personal politics when trying to answer, if under virtue theory did Eich behave ethically? For example, some people may believe that sticking to his personal beliefs and supporting what he thinks is right, is courageous, whereas others may think that he is being a coward by supporting something that hurts many people and is not a “right idea.” Some may believe he was acting honest by supporting his beliefs and coming clean about the donation, while others may believe that he is not being honest by saying that Mozilla’s goal is to treat everyone fairly, yet supporting something that clearly does not treat everyone fairly. Some may say that he has a lot of temperance because he reasonably desires his own beliefs to be accepted, while others may say that supporting a ban on gay marriage is not reasonable at all. Lastly, some may argue that he has justice because he has done a lot for the company, but others will say that he does not because he tarnished the company’s reputation and did not behave fairly and appropriately. Thus, it is an extremely difficult decision to say whether or not Eich made the correct decision, ethically, under Virtue Theory due to it's subjective nature.

Conclusion
In conclusion, most of the theories do state that Eich did not make the right ethical decision by sharing his personal politics but did make the right ethical decision by resigning. However, a lot of this can be subjective, depending on our own personal politics. So just like in this case, it is extremely important to simply just remain unbiased and try to figure out the best ethical pathway to choose.