The Hong Kong and Shanghai Banking Company is a bank that has locations in the United States and in China. The Company started to face backlash after it was revealed that they were committing fraud and stealing from their customers. The money that new customers used to create new accounts was immediately siphoned into the accounts of the stakeholders in the bank. The bank was able to acquire new customers by advertising at traveling seminars, on Facebook, and on YouTube with Webinars. The bank also used Christian imagery to draw people in as well.

The bank was also involved in a money-laundering scandal with the Sinaloa Cartel. This ordeal was tracked by Immigration and Customs Enforcement, and they found multiple trails of money linking the Cartel and the bank. As a result of the scandal, someone was murdered by an unhappy customer who lost three thousand dollars after investing with the Hong Kong and Shanghai Banking Company.

The Hong Kong and Shanghai Banking Company faced multiple charges for fraud and Money Laundering, but no one went to prison for their crimes. The highest degree of punishment was heavy fines and probation. The company still operates to this day without any scrutiny from the Department of Justice.

The Hong Kong and Shanghai Banking Company (HSBC) was founded in 1865 by Thomas Sutherford. The bank was created in order to provide a local alternative to the foreign banks in the British colony of China. Eventually, the HSBC became the central bank of China while also opening up several branches overseas (Mattera).

The HSBC moved money from the United States to Hong Kong over the course of 2013 and 2014. There was an eighty-million-dollar fraud scandal following the bank getting fined for 1.9 billion dollars. The actions of the bank became known after the release of the Financial Crimes Enforcement Network (FinCEN) files. The files are composed of 2657 documents including 2100 suspicious activity reports (SAR) (FinCEN Files reporting team). They led to the implication of five banks including the HSBC (Alonzo) These files covered two trillion dollars’ worth of transactions. The files were a subject of concern because they contained information that could affect national security. The whole scam was started by a Chinese National named Ming Xu. He ran a global investment bank called World Capital Market. This bank would return one hundred percent of the profit in one hundred days. He was able to eighty million dollars selling false investment opportunities through traveling seminars, Facebook, and YouTube webinars. Christian imagery was also a tactic used to bring in new members. The scam then led to the death of one of the investors, Reynaldo Pacheco, who was found underwater apparently having been bludgeoned to death with rocks. His job was to bring in new investors with the promise of getting rich. One woman he brought in lost three thousand dollars. This resulted in her hiring a team to kidnap him. This eventually led to his death. The first SAR was filed on October 29, 2013. The HSBC was filing the SARs, but they left off certain details about customers including the ultimate owners of the accounts and where the money came from (FinCEN Files reporting team). 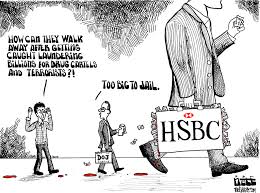 Source: Politics in the Zeros

The acts of the HSBC affected not only the United States financial system but also the Mexican financial system. According to InSight Crime, the HSBC, including the branch in Mexico, was accused of,

1.     Deliberately failing to maintain and implement strict controls that would have avoided the laundering of proceeds from illicit activities and the financing of terrorism.

2.     Maintaining supervision with “staggering and obvious blunders,” that permitted Mexican and Colombian drug traffickers to launder at least $881 million in the US financial system between 2006 and 2010.

3.     “Turning a blind eye to money laundering” that occurred “right in front of their eyes.”

4.     Intentionally making mistakes when it came time to put in action an effective program for monitoring suspicious transactions conducted by HSBC Mexico.

5.     Relying on a system with such weak anti-money laundering controls that drug traffickers could deposit hundreds of thousands of dollars in cash into its HSBC Mexico accounts on a daily basis.

These findings were eventually confirmed by United States Investigative services. During the course of the investigation, a Mexican executive was questioned fifty-nine times. This individual now holds a position in the government of President Andrés Manuel López Obrador. His job entails preventing money laundering in the Tax Administration Service. The HSBC was the recommended bank to use for criminals due to the bank's ability to ignore illicit activities. All the criminals had to do was have constant and continuous transactions occurring so that the bank could make money. Over a six-month period between 2007 and 2008, a group of auditors audited the HSBC in Mexico. They were able to produce ten thousand pages worth of reports that revealed the corruption inside the HSBC. This led to an extremely heavy fine of three hundred seventy-nine million pesos or about twenty-seven and a half million dollars. The United States Justice Department found that eight hundred eighty-one million dollars were laundered between 2006 and 2010. All the bank received for these heinous crimes were the fines of twenty-seven and a half million dollars. No one was sentenced to prison for any of the wrongdoing that occurred at the HSBC (Reyna).

After numerous court hearings, a 1.92-billion-dollar settlement and five years of probation were the ultimate punishments for those involved. In 2012, the United States Department of Justice had the opportunity to indict executives of the HSBC for collusion with the Sinaloa Cartel (Woodman). The Bank was accused of money laundering for cartels and state-sponsored terrorism. The blame can be placed on the inadequacy of the anti-money laundering protocols in place at the time. Immigration Customs Enforcement (ICE) discovered trails of money leading between the United States and Mexico that led back to the HSBC (Ross). The bank was also accused of money laundering for some Russians. The HSBC was also the bank that the company Alahdin which is registered in Hong Kong but has ties to the terrorist organization known as the Taliban. Ultimately, the Department of Justice decided to abstain from performing the indictment. This decision was opposed by multiple prosecutors who gathered 175 criminal charges against the HSBC that were ultimately hidden away. No one ever went to prison for the crimes cited in the charges (Woodman).

The stakeholders within the company and the cartels profited nicely from this whole scandal. They did not however operate within the law as multiple executives from the bank were brought to court regarding allegations of fraud and money laundering. They siphoned profits into the executives’ accounts. They laundered money for a cartel, Russians, and an organization with ties to the Taliban. The laundering of eight hundred eighty-one million dollars allowed for the operations of the cartel to continue. The scam also led to the death of one of the investors, Reynaldo Pacheco. While all charges were dropped, the bank is still responsible for the death of Reynaldo Pacheco and all of their other illegal activities. Money laundering is highly illegal as well as fraud. The HSBC was not even close to operating within the boundaries of the law. While they did not murder Reynaldo Pacheco, they may as well have. The HSBC performs unethical business practices according to individualism. The bank has received multiple fines for billions of dollars and consequently, they are not maximizing profit either.

Everybody loses money in this case. The bank loses money from the fines. The people that open new accounts lose their money to the stakeholders in the company. Terrorism was sponsored which makes peaceful nations unhappy. The laundering of eight hundred eighty-one million dollars made the cartel happy, but it made anyone who had to deal with the cartel unhappy. The massive fine of twenty-seven and a half million dollars made the HSBC very unhappy, though they continued their activities despite the fines Reynaldo Pacheco lost his life as a result of the bank's actions. His family and friends will forever be unhappy with the actions of the HSBC. No one, in this case, is happy, and therefore the company should look for a different course of action. A utilitarian approach to this case sees that none of the parties are happy, and therefore the business practices are unethical. This means that the company needs a new direction that maximizes the most amount of happiness.

Basic virtues include Prudence, the ability to make the right decision, courage, the ability to stay the course no matter what, self-control, the ability to use emotions to drive your mission in life, and justice, the ability to correctly assign punishments and rewards. Along with these virtues comes magnanimity which is to be great and generous with said greatness. Everyone must benefit from what they are doing. None of the values of virtue theory are shown in this case. The company has to rely on manipulation to pull in any new members, and they quickly find out how bad their investments were. This manipulation has led to multiple court cases, fines, and the death of Reynaldo Pacheco. The HSBC keeps lying about what they are doing. They claim to correct themselves, but they keep doing their nefarious activities This strategy has not worked out for the company; therefore, the company will ultimately fail.

What the HSBC did was clearly wrong. Any and all of the money earned was through stealing and manipulation of the customers. Those involved in the scandal deserve to go to jail for what they did. The multimillion-dollar fines were not enough to prevent anything from happening as the illegal activities continued regardless of the fines imposed upon the company. Reynaldo Pacheco and his family deserve justice for what happened to him. Those responsible for their deaths deserve the most jail time of all the guilty parties. The money laundering for the Sinaloa Cartel, Russians, and the Taliban is unforgivable. The HSBC helps the cartel hold its drug money. They look the other way allowing for the cartel to continue what they are doing. All the HSBC requires is that the cartel has constant and continuous transactions with the bank. The one executive that still has his job in the Mexican government needs to go to jail as he was in charge of preventing the money laundering at the HSBC, but he let it happen. They help the Russians launder their money from their nefarious activities. They have ties to the Taliban, specifically to a portion that helped build roadside bombs to detonate against the United States Military.

The Hong Kong and Shanghai Banking Company needs a full-scale restructure in order to come back from such a large scandal. Any and all ties between the bank and the cartel, the Russians, and the Taliban need to be severed. They need to stop siphoning money into the stakeholders’ accounts. The bank will have to start small again to gain the trust of its customers. The best place to begin would be in China where the bank was founded. The bank might even have to change its name in order to get out of the shadow of the Hong Kong and Shanghai Banking Company. The damage may be irreparable and a new name might settle some unsettled customers. The HSBC needs to hire somebody to keep them in check and not be threatened with the loss of their job. If the bank wants to operate cleanly without amassing large fines for misconduct like fraud, it needs someone who can stop bad deals, someone who can prevent illegal activities like stealing from the customers.