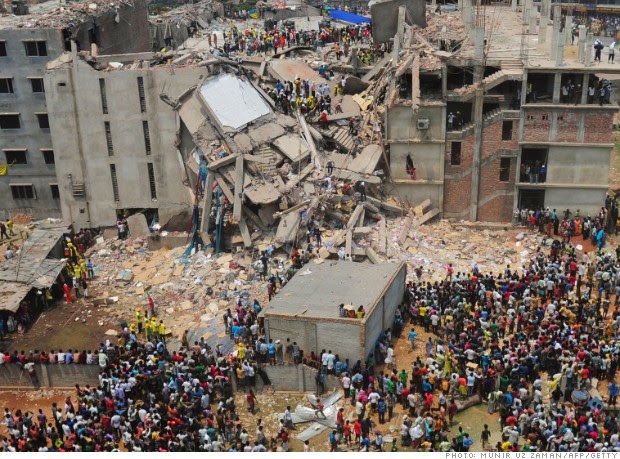 Controversy
Rana Plaza, a $20 billion garment industry in Bangladesh owned by Sohel Rana, collapsed on Wednesday April 24, 2013 at 9 a.m killing  1,132 young Bangladeshi woman and men while leaving 2,500 seriously injured. The men and women injured are missing arms and legs, are paralyzed, and are suffering from many head injuries. On the day before the collapse, April 23, huge cracks appeared in the building. The eight story building was built on spongy ground without the correct permits. The workers, mainly young women, were told the next day that if they did not continue working they would not get their months pay.  The workers in the factory were paid at starvation wages such as 14-16 cents and hour while working thirteen to fourteen hours shifts six out of the seven days a week. Without their months pay their families would starve. Going to work or going without their months pay was not even a question, they returned to work. Within the next hour the building began to collapse. Jannat, a worker in the factory for New Wave Style Factory said, "Suddenly we saw our floor collapsing, going doing, and falling apart very fast. In a minute, I was knocked down in a dark place... I was suffocating. There was no air and we were trapped in darkness." Rana Plaza was constructed illegally and violated building codes and failed to pay attention to the warnings of safety. Rana Plaza housed five garment factories. These five garment factories were New Wave Style, Ether Tex, Canton Tech Apparel, Phantom Apparels and New Wave Bottoms. These factories produced clothing for The Children's Place, J.C. Penney, Joe Fresh, Denim Co. etc. These companies relied on the cheap labor provided by their workers to keep their costs low and became the second-largest exporter of clothing behind China. The five garment factories are some of the stakeholders involved in this disaster. The consumers who buy these products, employees who work at Rana Plaza and the families of the workers are also stakeholders that have been affected.
The Bangladesh factory collapse could have been avoided. There was no accident. This garment disaster has posed some serious questions about safety regulations and working conditions of clothing manufacturers. This disaster has pointed the finger at Sohel Rana, the owner, the government and the consumers and buyers in western societies. Senior Officer, Laia Blanch, said "Multinational corporations, factory owners and the Bangladeshi government have once again failed to ensure that the health and safety of garment workers are at the forefront of the country's main export sector." Not to mention there was a very similar building collapse in the same town seven years ago which killed 64 garment workers. This is becoming a pattern of tragic accidents with little changes being made. The union is still considering appropriate action to take to improve working conditions in Bangladesh factories. The pressure needs to be on the government of Bangladesh to take action and step in between the owner, the local manufacturers, and worldwide. Moving the factory to a different area is not going to change anything. It will just cause the tragedies to happen in a different area. Until the government steps in and interfere with illegal running businesses no change will be made. Sohel Rana should have taken responsibility for the factory collapse instead of fleeing to India. Anger over the disaster sparked protests and clashes. Police had to use force to put an end to all protests such as tear gas, water cannon and rubber bullets on anyone who set a car on fire.

Individualism
According to the Individualist Theory, the goal is to maximize profit for the stakeholders and to act in their best interest. Rana Plaza did maximize the profit to $20 billion but did not act in the stakeholders best interest. If the owner, Sohel Rana obeyed the building codes and warning signs the building would not have collapsed and killed 1,132 innocent workers and injured another 2,500 workers. If they obeyed these codes and signs the building would still be in tact without cracks in the walls and they would still be producing for the five garment factories within. By doing this they would have maximized profit as well because their business would have been able to hold its ground longer and keep producing. Instead they owner was greedy and wanted the profit now and did not look in the long run or in the best interest of the company.

Utilitarianism
According to the Utilitarianism Theory, the action is deemed ethical if it promotes happiness to the maximum amount of people. Happiness and pleasure are the only things at intrinsic value and should be brought out to all beings capable of feeling it and doing so impartially. The workers of the Bangladesh factory were not happy with their wages, hours, and working conditions. They were not happy when they had to choose between a months pay or putting their lives in danger in a factory that could collapse at any moment. No pleasure was for them when the factory collapsed while they were working within in. There was also no happiness or pleasure when their family members watched or heard the factory collapse knowing that their loved ones where inside. There five garment factories inside of this building are not content that the Bangladesh factory will not be producing their clothes and products anymore. They are not happy that their company's name is associated with this tragedy.The customers are not happy with the fact that less will be produced and that this tragedy had to happen and neither is the owner. No one is happy or satisfied with this deadly disaster, therefore, this action is deemed unethical. 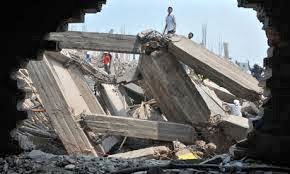 Kantianism
According to the Kantian business ethic theory, rational decisions need to be ethical. The decision you make needs to be motivated from your duty and not self interest. Being ethical means pertaining to the rules or standards for a right conduct or practice.A business is never exempt from these rules and standards.The business should always be honest and loyal to their workers and customers. Rana Plaza, a Bangladesh factory, was unethical. They did not follow the building codes/regulations and did not follow the safety warnings. If they acted ethical 1,132 lives could have been saved and 2,500 people would have kept their arms, legs, and would be able to walk and carry on with their lives. Instead Rana Plaza acted on their own self interest of creating a profit and did not worry about the lives involved. The owner should have taken actions to get the building up to the building regulations. Instead he never acted on it, and the building began to crack. Even after the building was showing signs of collapsing Sohel Rana did not take any action to prevent what soon became the deadliest accident in the history of garment industry. He threatened his workers to go back to work or they would not receive their months pay. Many of the workers within this factory did not have enough money to feed their families. The thought of going without a months pay was unbearable to them. If Sohel Rana was acting ethical he would have told his workers that the building was begin to crack and that it did not follow the proper building codes. He would have kept his employees from going back into the building once a warning sign was presented such as the cracks. Instead he still put his employees in danger knowing what could happen to them. The law of humanity states you should, "act in a way that you treat humanity, whether in your own person or in the person of another, always at the same time as an end and never simply as a means." This means that you should act for it's own sakes rather than a way to get something else. In order to do this you cannot deceive your customers and employees and have to be fair with treatment and wages.Rana Plaza deceived their employees and treated them unfairly. Their wages were seen as 'starvation wages'. This meant that their wages did not pay for enough food to have a healthy lifestyle. The Bangladesh factory collapse was seen as unethical based on Kantianism. 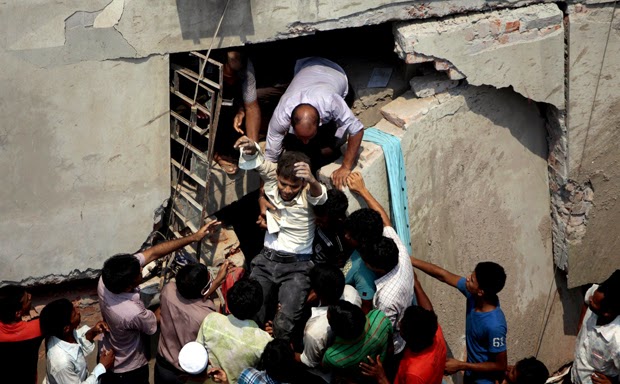 Virtue Theory
The Virtue Theory focuses on four characteristics. The four virtues must be met in order for the business to be ethical. The four main virtues of a character are courage, honesty, temperance/self-control, and justice/fairness. The courage characteristic represents the risk-taking and willingness to take a stand for the right ideas and actions.Rana Plaza took a risk by not following the building codes and the warning signs however it was not for the right idea or actions. The building was built cheap so that it could open and start their business right away. They did not care about the safety of the building as long as it was going to make them a profit. The second characteristic is honesty which is the agreement to be truthful with the public in hiring and treatment of employees, customers, and other companies.Sohel Rana was not honest when it came to his employees and customers. The public did not know of the conditions within the factory that they were buying from and supporting. If Sohel was honest with what went on within the walls he would have lost customers and garment stores. He was also not honest with his employees when it came to their treatment. They were never told they would be working in dangerous building that could collapse at any moment. The next virtue is temperance  which means the business had to have realistic expectations and desires. Rana Plaza had expectations and desires. They consisted of maximizing profit while putting lives at stake, getting away with not following building codes, and making sure no one found it. These expectations and desires may have been realistic in their eyes. Anyone else not involved in this building would have seen these expectations and desires as unrealistic, risky, and not worth it. The last virtue characteristic is justice which is hard work, quality products, good ideas, and fair practices. The employees of Rana Plaza were working hard to create quality products. However, they were not being treated fairly. Rana Plaza had unfair practices when it came to their workers. For the products they were creating and the amount of time they spent at the factory they should have been receiving wages that could support them and their families. Instead they were making 14-26 cents an hour. What sounds fair about that? The Bangladesh factory collapse is seen as unethical based on the four characteristics of the virtue theory.

Overall, the Bangladesh factory collapse could have been prevented if the owner, Sohel Rana, and the Bangladeshi government were to abide by the four different ethical theories. Instead they did not abide by any of these theories and a garment industry disaster occurred.