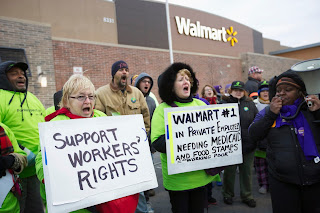 Walmart first opened there doors in Rogers, Arkansas on July 2nd in 1962 by Sam Walton. The company grew quick, by 1967 the Walton family owned 24 stores and generating $12.7 million in sales. As time goes on we see that success continue and at an exponential rate. Today, Walmart employees more than 1.5 million employees between 5,000 stores in the United States and generated $486 billion, making it the largest company in the world. One thing that no one can argue is that Walmart knows how to make money and a lot of it. Walmart has the largest number of employees of any private company in the United States with the number of jobs that they offer. Walmart is a hugely successful company making its investors tons of money and providing jobs for American work's, whats not to love?

Well it turns out there is a lot. While Walmart clearly does a lot of things well, one this they don't is treat there employees well. The company is renowned for not paying employees well and keeping them mostly part time to avoid pay benefits. Beyond this they have countless legal cases against them for poor working conditions, stealing money in wages, wrongful terminated, and illegally disciplined workers to name a few, this was just a list from 2014.Walmart is profiting at the expense of there employees. 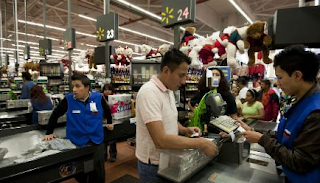 Walmart isn't just having these allegations brought against them, they are losing the cases. Back in 2005, workers from Pennsylvania brought a class action suit against Walmart for a violation of the Pennsylvania Minimum Wage Act. In this case they force current and former employees of approximately 187,000 to miss breaks and work off the clock. This case was settled last year in favor of the employees at a cost of $140.8 million. Another case brought against Walmart was back in 2015 for denying health insurance to same-sex spouses, in the Massachusetts. This was a clear violation of the U.S. Equal Employment Opportunity Commission, which they ruled that Walmart discriminated against employees because of the sexual orientation. This case cost them a settlement of $7.5 million to employees who were able to obtain the coverage for there spouse.

Stakeholders
There are a lot of stakeholders to considered when looking at the decisions that Walmart makes and who they affect. The biggest stakeholders for this ethical issues are the employees. The decisions that Walmart makes when it comes to wages and how to treat employees directly affects them. Customers are also major stakeholders in the decisions on how much the employees are made. If there is an increase in wages than customers will see an increase in the price of products that they are purchasing from the company. The last stakeholder that I am going to mention is the shareholders, who have a direct investment in the company and are the ones affected most by the performance of the business. It is debatable whether increasing wages can increase of decrease the performance in the end, but shareholders will certainly see changes by the decisions regarding this issue. 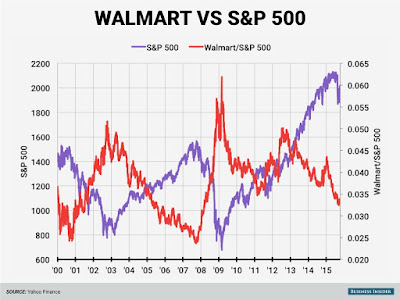 First, we compare these issues to the ethical theory of individualism, which states that they only goal of business is to profit and that is the only obligation with in the confines of the law. So first looking at Walmart's performance, we could say that what Walmart is doing okay by individualist ethical way of thinking, because Walmart is making its owners and stockholders so much money. Of course though once we add in the results of the ethical cases, Walmart fails the standards of individualism. Ultimately the courts have ruled
that Walmart actions were not legal for both examples and had to take actions to correct the mistreatment they were conducting that cost them hundreds of millions of dollars. This is taking away from profits and limiting the amount of wealth of the owners. 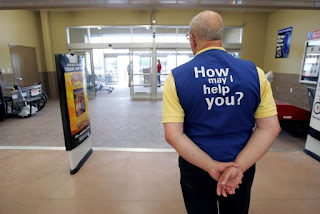 Next, we take a look at utilitarianism, which believes that happiness or pleasure are the only things of intrinsic value. Now depending who we ask we get different answers. From the view of shareholders, owners and managers, they are extremely happy. They have been making massive amounts of money from the performance of the retail giant, even after all the law suits and class actions. If we ask the other stakeholders, such as employees, customers and the community, they are not happy at all. Employees are extremely unhappy with the working conditions, the way they are being treated and the lives they live do to the poor level of pay. Customers may be happy for the prices they are paying, but a growing number of customers are not shopping at Walmart because of these issues because they don't agree with what is going on. Walmart is not focusing on trying to promote happiness and pleasure in there business, but just profit above all else.

Kantianism
Our third ethical theory that we look at is kantianism, which focuses on rationality and doing what is right because it is right. Walmart fails this ethical theory in all aspects. Walmart isn't acting rationally in how they conduct business and the strategies they use. They are using old techniques that have been proven to limit success and growth of companies, by finding every way to cut cost and raise prices. So many companies have shown that paying more and treating your employees well always leads to better results and higher return, look at companies like Costco or Google. Walmart is taking lazy business strategies and just accepting low growth and only focusing on holding the revenue and current profit margin constant. It is very clear that what Walmart is doing isn't right. They are taking advantage of there employees and there market position to bully there way to short term profit. They are stealing time from employees, underpaying those employees, limiting benefits, providing poor work conditions and violating so many of there basic human rights. Walmart is doing the wrong this, for the wrong reason, causing so many people to suffer and acting inconstantly in compared to the origin of the business.

Virtue Theory
Lastly, we analyze virtue theory, which ask the question of how virtuous the company is. This is another theory that Walmart is not holding up its end of ethical business practices.The biggest weakness area that Walmart has is being cowardly in how they are trying to grow the business. As mentioned before they are taking basic business strategies of cutting cost to increase profit, while keeping prices low. They are not trying to find long term solutions to give Walmart continuing growth for the future of the company. Companies such as Costco, pays there employees way above minimum wage and still provide so prices to customers. While the growth rate wasn't as high in the beginning, they are maintaining steady growth and now hitting a point where they are surpassing Walmart in performance. Walmart could resolve this issues by using the capital in the company to implement new strategies to try and increase the profit that they have been receiving, which has seemed to flatten out the past five years. This cowardly strategy is only providing consistency and not any growth. 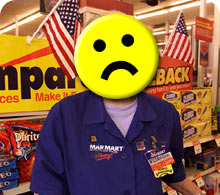 Walmart is clearly demonstrating unethical business practices. They have been mistreating employees and breaking dozens of employee right laws. The worse part is that this has been going on for years and they have just started making "changes" now. There was a campaign to increase the average lowest paid employee to $9 to $10 an hour. This is barely above the minimum wage in most states and in some it isn't even that. It is really disappointing how this successful business choose to run the future of there company with such small steps and ultimately only damaging themselves as well.

Action Plan
Walmart has currently started implementing a wage increase plan as of 2016. The plan states that part-time employees will begin to make $10/hour and full time will make $13/hour. This is still not enough, especially when we consider the war on wages that is going on right now that is increasing wages to at least $10/hour in every state. This current plan is investing a total of $2.7 billion over two years, which I feel just inst enough to cut it. Walmart's profit margins last year was around $15 billion. If Walmart implemented $5 billion for 3 to 5 years, increasing wages, working conditions and benefits, I think we will see that sales will grow at a higher rate and profit margins will soar after this implementation. Keeping the action plan simple of this blog, I think first Walmart needs to increase wages in the beginning and then lower that increase at the end of implementation. At the same time, spending money on working condition improvements the first year for all stores. Lastly, implementing the remainder of the money for benefits for the employees. It is a costly strategy but with the increased wages we eliminate the ethical dilemma, we please customers which should increase support and in the end put more money in shareholder's pockets.

These facts and analyses are based on an original research paper by Ryan Leite, "Walmart: Under Compensation for Employees (2016)"