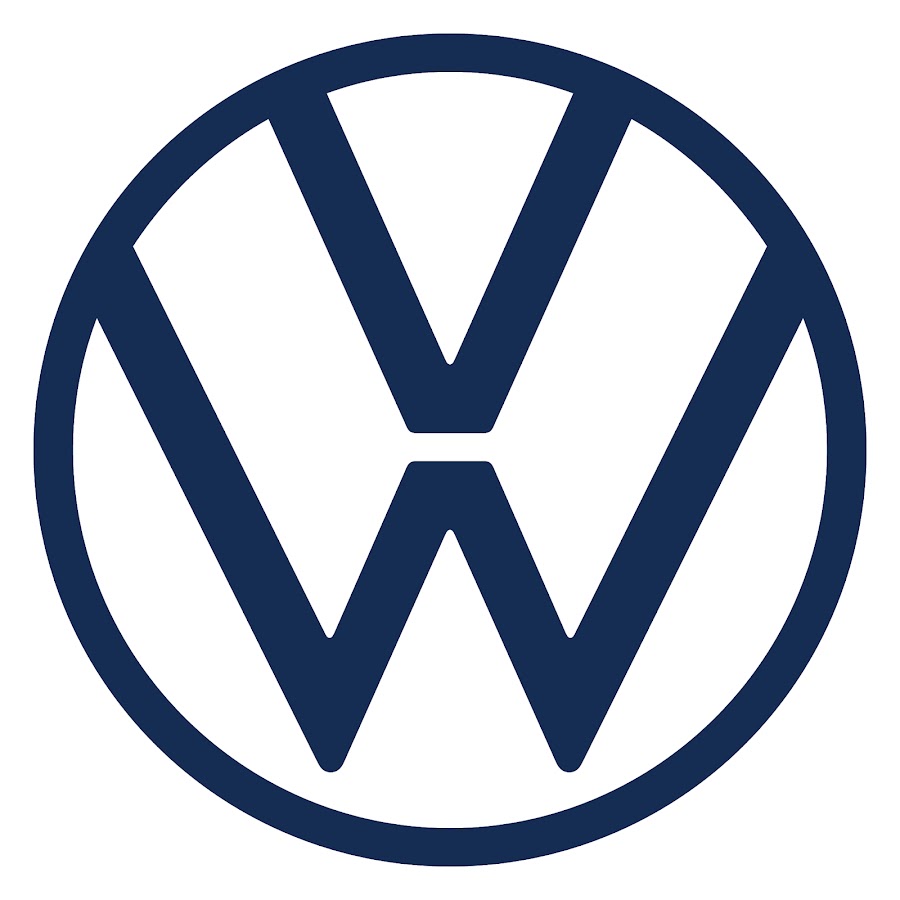 Over the past two years, Volkswagen has been dealing with the aftermath of an internal scandal that has deeply dented the integrity of the company. In May of 2014, a small research team from West Virginia University, led by Dan Carder, was conducting emissions tests on small passenger cars from BMW, Mercedes Benz and Volkswagen (ABC). When the team tested two different Volkswagen car models fitted with the 2-liter turbocharged 4-cylinder diesel engine, the information they uncovered prompted the California Air Resources Board to launch an investigation into Volkswagen (Gates, Ewing, Russell & Watkins).
Volkswagen had apparently been equipping a wide variety of their diesel vehicles with a “defeat device”. In order to comply with U.S emissions standards, every diesel car manufacturer is required to have software installed in the car to clean the diesel exhaust. In Volkswagen’s case, the software they were using became enabled when the car was undergoing emissions testing, but shut off during normal driving conditions in order to improve fuel economy and performance (Young). This caused the affected diesel cars to release almost 40 times the legal amount of nitrogen oxide into the air, which can wreak havoc on the environment (Gates, et al.).
After further testing, it was discovered that fourteen specific car makes and models were equipped with this duping software. With all said and done, Volkswagen had to recall over 11 million of their vehicles due to their faulty engine software. Around 580,000 cars were recalled in the United States, while 10 million were recalled in Europe. The remainder include cars that are scattered throughout Asia, South America and Africa where the number of diesel cars is relatively small (Smith and Parloff).
Since this scandal went public, Volkswagen has been taking appropriate steps and actions to correct their mistakes to the best of their ability, while coping with the damage done to their overall image.

Stakeholders include anyone or anything that are affected by the policies, objectives and actions of a company and Volkswagen’s recent scandal has only highlighted the extent to which they can be impacted. In regards to this emissions scandal, the Volkswagen's stakeholders include the following: customers, employees, dealers, shareholders, the environment, other auto manufacturers, Volkswagen’s executives and board members, and the government and its courts.
All of these stakeholders have been affected in a multitude of different ways ranging from lost jobs, stock market changes, environmental issues and tarnished reputations.

The concept of individualism was introduced by Milton Friedman and is regarded as The Economic Theory. In plain words, if a business uses Individualism as the basis for their ethical decision making and justifications, the ultimate and only goal for that business is to maximize profit for their shareholders and owners at anyone else’s expense. In regards to Volkswagen’s recent scandal, one can argue that the company took on an individualistic approach based on some actions and decisions that were taken.


Volkswagen lied to its consumers and the government about the quality of diesel engines that they were putting in their cars in order to make sales. Volkswagen has a heavy presence in the diesel auto market in the United States, and to comply with the EPA’s newer regulations would have cost the company time and money that it didn’t have to spare.
Volkswagen also disregarded their responsibilities for the global environment. For years before the scandal went public, Volkswagen was known as an environmentally friendly and sustainable company. But as shown through their deceitful actions, the company was clearly more concerned about their bottom line versus an important company objective. 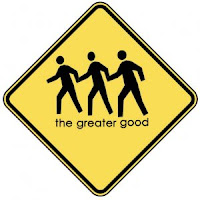 Another prominent ethical theory is Utilitarianism. This theory emphasizes producing the greatest amount of good for the greatest number of people. Utilitarianism falls under consequentialist ethics, which means that determining whether or not an action is considered good or bad directly relates to its consequences. Ultimately, this ethical theory comes down to a matter of perspective in terms of what constitutes an action being beneficial or harmful (DesJardins 29-30).
Given this, Volkswagen's actions are quite oppositional to what a Utilitarian would believe in. Over the course of this entire scandal, absolutely no good was done whatsoever. In no way, shape or form did anyone actually benefit from Volkswagen's actions.
Consumers are now faced with the question of what to do with their defective cars. Employees have lost their jobs due to the billions of dollars being spent on rectifying problems that should never have existed. And this is just the tip of the iceberg.
The only good thing that can possibly come from this scandal is actually going forward. Volkswagen's mishap could help reinforce the importance of compliance, risk management and auditing within the company. But for now, Volkswagen has only created issues for everyone involved.

Kantianism on the other hand, is a more principle based ethics perspective. It can be loosely defined as the ethical duty to "treat people with respect, to treat them as equally capable of living an autonomous life" (DesJardins 38). People are ultimately to be treated as ends, never as means to an end. And this can get complex when determining what "rights we have and how they are justified, the range and scope of rights, and some process for prioritizing rights and resolving conflicts between different rights" (DesJardins 39).
By directly lying to their consumers, shareholders, employees and their dealers, Volkswagen acted incredibly immorally from a Kantian perspective. Volkswagen never gave these people the right to know what they were actually doing. They had all of these people believing in facts and images of the company that couldn't have been farther from the truth.
Volkswagen's dishonesty kept consumers buying their cars and shareholders buying company stock. Employees kept working for the company while helping to build these faulty cars, and car dealers who sold Volkswagens continued to do so because they didn't feel that there was a reason not to. Volkswagen used all of these people to keep their sales and business going, without taking into consideration their right to make their own decisions.

The Virtue Theory is a philosophy based on Aristotle's ethics and is focused around the idea of determining "what type of person one is" (DesJardins 42). Virtue ethics seek to discover character traits that constitute a good and full human life, and these characteristics are known as virtues. The four main virtues of character include courage, honesty, temperance/self control and justice/fairness. And virtue ethics also offers more detail regarding business life- making the distinction that there is more than just good and bad when describing a person or company and their actions.
In regards to the four main virtues, Volkswagen failed to uphold any of them. To be courageous is to be willing to stand for the right ideas and actions even if no one else does. Volkswagen doesn't exemplify courageousness because the company intentionally created and installed defective software. The virtue of honesty is described in regards to the treatment of employees, other companies and customers. This entire scandal occurred because Volkswagen wasn't honest from the start. Volkswagen designed this emissions software to know when it was being tested and work then, but shut off afterwards in order to improve fuel performance. Temperance/Self Control can be defined as having reasonable expectations and desires. Volkswagen clearly had unattainable desires and expectations if they had to go to the extent in which they did in order to meet their personal goals. No company should have to lie to the government in order to continue to be in business. Lastly, to have justice/fairness means to work hard, produce quality products and uphold fair business practices. Volkswagen created the duping software it did because they didn't want to take the time to create and make a proper emissions system that would comply with government regulations.
Overall, this entire scandal could have been avoided if Volkswagen abided by any of these virtues. 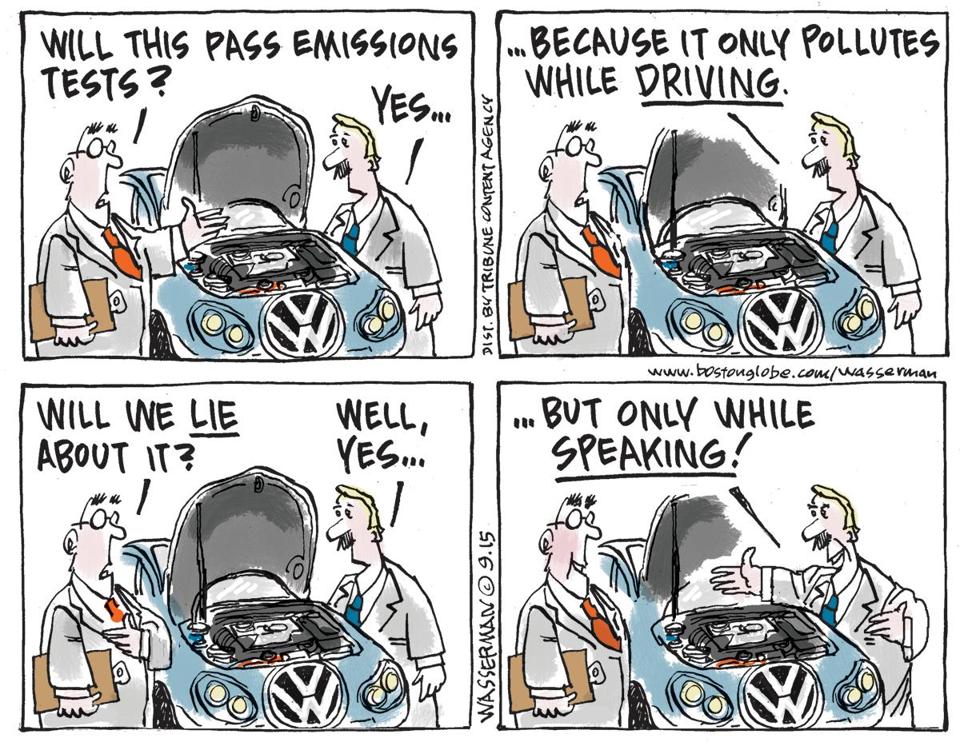 Volkswagen's actions in this entire situation are less than justifiable. This whole scandal could have been avoided if Volkswagen spent just a little more time and money developing a cleaner diesel engine, but apparently the company's priorities were more focused on their sales rather than releasing quality vehicles.
Volkswagen sacrificed their integrity and company image for something that could have been easily dealt with, and now they will be dealing with the aftermath of their decisions for years to come. Not only did they lose consumers and stakeholders, but also the trust of the government and investors.
From the beginning, Volkswagen and its executives should have been honorable enough to take the high route, even if that meant going against their personal beliefs. Overall, the company should have had goal and behavior congruence between the company itself, executives, board members and employees.

The news of Volkswagen's emission scandal went public in May of 2014, and ever since then they have been taking much needed steps in order to rectify the situation as best they can. Volkswagen has set aside $15 billion to settle claims within the United States. Additionally, the company has multiple courses of action available for their consumers based on the make, model and year of the affected car, as well as the type of ownership. One option is the $10 billion buyback program which was approved by the U.S. District Court Judge Charles Breyer (Ewing & Hiroko). This covers about 475,000 Volkswagens and Audis that have 2-liter engines and buyers can receive between $12,500 and $44,000 while leasers can get up to $4,900 for their vehicles. The second opportunity Volkswagen consumers have is to actually keep their cars. If consumers decide to go this route, they will receive between $5,000 and $10,000 to compensate for the diminished resale value of their vehicle. They will also be able to bring their cars to Volkswagen dealerships to get the emissions fixed free of charge. Volkswagen’s last course of action is their Customer Goodwill Program. This is a multi-part program that gives a stipend to 2-liter and 3-liter diesel car owners. The consumers that own a 2-liter car can receive a $500 prepaid VISA card, a $500 cash card valid at Volkswagen dealerships and free 24 hour roadside assistance for three years.
In order for Volkswagen to gain back the trust of their consumers, stakeholders and the government, they need to be more honest and transparent about the details of their current and future cars. This could involve publishing detailed reports about the cars that include tests and information collected by a third party in order to verify the authenticity of the data. I believe that yearly government check-ins would also be justifiable.
I think that Volkswagen has taken a step in the right direction in terms of getting rid of a majority of top level executives and board members. This allows the company to step forward with a fresh face of management.
Currently, Volkswagen's company goal is to "offer attractive, safe and environmentally sound vehicles which can compete in an increasingly tough market and set world standards in their respective class." I think that this is an excellent mission statement for the company, and they should strive to fulfill these goals. Ultimately, the company has done a pretty good job so far in terms of creating different programs for their consumers, and if they continue on the honest path they are following now, Volkswagen can move past this unfortunate scandal.