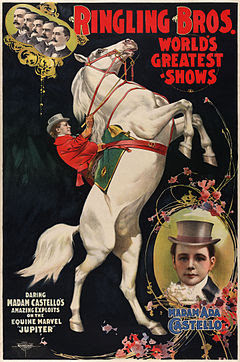 Ringling Brother’s Circus is one of the largest circuses on the planet, featuring acts of courage, comedy, and danger. Their largest crowd drawers since opening in 1871 have been their animal acts, lion tamers, tigers, and elephants dancing in choreographed displays. These acts, while bringing in so many customers, has also led to significant controversy regarding the ethics of their treatment while being trained, carted from place to place, and having to perform under any condition, even while sick. In one particularly gruesome case, a baby Asian elephant named Kenny was denied proper veterinary care and on his first day of performing, died after three acts. This has led to numerous citations from organizations such as the USDA (United States Department of Agriculture) resulting in two fines totaling $290,000 in 1998 and 2011, as well as lawsuits from the ASPCA (American Society for the Prevention of Cruelty to Animals), PETA (People for the Ethical Treatment of Animals), and other animal rights groups. While Feld Entertainment, Ringling’s parent company, has insisted that the mistreatment is false even going so far as to publish a full page in newspapers across the country attacking animal rights groups on the validity of their statements, as well as unrelated issues. As these animal rights groups have grown increasing support, Ringling Brother’s have felt the public pressure to end the acts leading to the end of elephant acts in 2015 and finally the closing of all of its shows on May 7th, 2017. The parent company of Ringling Brother’s Circus, Feld Entertainment, has cited animal activists as directly being related to why they have decided to close as well a dramatic drop in ticket sales after the ending the elephant shows.


Stakeholders
The Stakeholders in this controversy include those on both sides of the issue. The performers are a large one who are now being laid off which is terrifying for many of them. Much of circus work is highly specialized and with less and less people being interested in the art in general, it will be extremely difficult for these performers to find work later in their field. It will be even more difficult for tamers as public opinion sways away from the exploitation of animals, most of them will have to find work somewhere completely different. Feld Entertainment has a major stake in the well being of Ringling as they currently own it and directly benefit from them. Ringling also has high operating costs which translate to heavy losses for the suppliers of their shows as well as the cities that rely on the influx of people to see the show bolstering business around the venues. On the other side, the closing of Ringling Bros. and Barnum & Bailey Circus is a major victory for animal activists and the animals that they are trying to save and protect. Another major stakeholder is the audience for Ringling who will no longer be able to experience the magic of the big top. 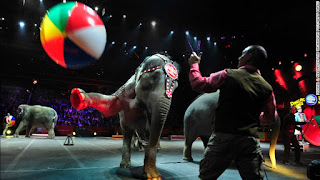 Milton Friedman, the founder of Individualism, describes his ethical theory as maximizing profits for the company’s owner(s) within the confines of the law. For Ringling Brothers’, the decision to end their animal acts would be seen as ethical. Closing down is almost the complete opposite of a key part of the individualist theory, making a profit, but currently how it is being run is on a path to profit loss. Further legal battles and inevitably, more citations and violations would lead to higher costs in the future which can be avoided. Feld can use this saved money in either a new venture or by improving their other shows for a higher return on investment than they could ever receive from Ringling Bros. and Barnum & Bailey Circus. To an individualist, animal rights don’t mean jack squat so the poor treatment of the animals is not a concern for them. They do however insist on conducting business within the confines of the law which the citations and violations they were receiving proved that they were not. Even though the laws they broke weren’t concerning people, a law is a law and once broken, their actions become unethical. To right this, either Feld would need to restructure the entire Ringling Circus or simply cut their losses and give in to public pressure.  By closing, they have managed to remain within the ethical side of individualism. 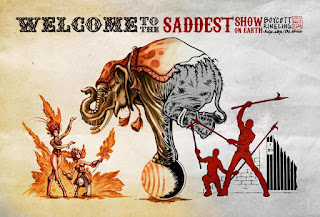 For a utilitarian they would deem the closing of Ringling Brothers’ and Barnum & Bailey Circus as ethical. Utilitarianism focuses on maximizing the happiness of all beings capable of experiencing it. The animals that the circus keeps are in no way happy, some suffering to the point of death. Many of the creatures are able to perform so well because they are intelligent creatures, such as elephants. As such, they can feel a wide range of emotions from happiness to sadness to anger, some so much so that they have resorted to self-mutilation to escape the awful conditions that they face. These are not the signs of creatures who enjoy their current situation but ones who are in misery for almost every moment of their ‘careers’. When weighing the potential happiness that the circus provides versus the harm it causes, it’s clear that the performances are unethical. Although the performers are going to be upset and audiences won’t be able to experience the wonder of the circus, the animals are abused to the point of death, and happiness does not rationalize death.


Kantianism
A Kantian will look at an ethical dilemma by what is the most rational choice, by humans in their right mind, while not considering the needs for the irrational or animals. In this situation, Ringling Brothers’ would have no obligation to care for the needs of dumb beasts and instead care only for rational thinkers, the business and its customers. As much as Feld Entertainment might try and hide or deny the allegations of the mistreatment of their animals, most people already generally know about it and have picked a side on the issue. By freeing and ending the animal shows, they removed a key attraction for the public, lowering interest and resulting in not just decreased sales, but zero sales. By closing their doors Feld Entertainment would be acting even more unethically because they could easily improve the conditions of the animals and prevent more costly violations, while also generating ticket revenue. Now, Feld lost a huge big name attraction that will take years for them to acquire another attraction that has the same notoriety. So to a Kantian, this would be deemed unethical as they are considering those who are unable to be rational, animals.


Virtue Theory
Virtue Theorist care about the virtues of the one making the ethical decision characterized by fulfilling the virtues of the decision maker to the utmost. For Feld Entertainment they list “creating lifelong memories” as one of their goals which is only hurt by the removal of the animal acts. For a child, seeing their favorite animals perform feats of showmanship or acrobats flying through the air is magical and a moment they will never forget. Now, Feld is no longer able to achieve their its goal deeming their closure of Ringling Brother’s unethical.


Justified Ethics In my opinion, Feld Entertainment’s decision to close the curtains on the Greatest Show on Earth, Ringling Bros. and Barnum & Bailey Circus is unethical. I agree that the treatment of their animals has not been the best, not properly caring for them, forcing them to live in unnatural places and do unnatural things, and in some cases, killing them, but I don’t think that should be the whole story. The circus is one of the oldest and most unique forms of entertainment that the world has seen, and Ringling Bros. is America’s most pervasive that we have ever seen. While ticket sales may have been declining I don’t believe that circuses are at death’s door, and with a little bit of elbow grease and a whole lot of love from a passionate, competent leader, the trend could be turned around. Much of their problems spawned after losing the elephants, their biggest attraction, resulting in lost interest. The citations that they were receiving could easily be fixed and Ringling Bros. could still be a profitable business, unfortunately they chose the unethical and costly decision of closing their doors, putting their loyal and faithful employees on the street.
Sources
"12 Things Ringling Doesn't Want You to Know." PETA. People for the Ethical Treatment of Animals, n.d. Web. 21 Feb. 2017. The Associated Press. "Ringling Bros. to Retire All Circus Elephants in May - 2 Years Early." NBCNews.com. NBCUniversal News Group, 11 Jan. 2016. Web. 13 Apr. 2017. "AUGUSTUS RINGLING DEAD.; Head of Tented Shows In America Dies in New Orleans." The New York Times. The New York Times, 19 Dec. 1907. Web. 13 Apr. 2017. "Feld Family Buys Ringling Bros." The New York Times. The New York Times, 18 Mar. 1982. Web. 13 Apr. 2017. Johnson, Natalie. "Circus Elephants in Spotlight." TODAY.com. TODAY, 20 May 2009. Web. 13 Apr. 2017. Karimi, Faith. "Ringling Bros. Elephants Perform Last Show." CNN. Cable News Network, 2 May 2016. Web. 21 Feb. 2017. Lush, Tamara. "APNewsBreak: Ringling Bros. Circus to Close after 146 Years." The Big Story. Associated Press, 14 Jan. 2017. Web. 21 Feb. 2017. Moore, Heather. "Cruelty Under the Big Top." Impact Press, June 2002. Web. 13 Apr. 2017.
Posted by Unknown at 11:16 AM