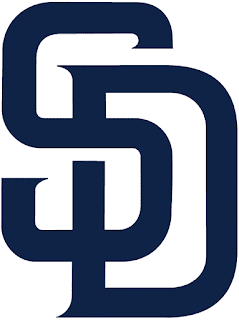 Baseball has had a presence in the city of San Diego California since 1936 when 17 year old Ted Williams first took the field for the San Diego Padres of the Pacific Coast League. In 1969, the Padres became the last of four teams to be included in the Major League Baseball expansion to 24 franchises. Things haven't exactly panned out for the Padres since entering the league. In 1973 the team was sold to Joseph Danzansky and they were set to become the Washington Stars. Lawsuits complicated the sale and McDonald’s founder Ray Kroc bought the team. Despite remaining in southern California, the Padres lack any real success with a lackluster record of 3540-4110, and 5 playoff appearances and the constant threat of relocation looming over the franchise.

In recent years these struggles have continued as the team tries to put out a roster capable of competing for a chance at the playoffs. With the signing of former Texas Ranger Assistant General Manager A.J. Preller in 2015 it had looked like the Padres fortunes were about to finally change. During the 2014-2015 offseason the Padres made several blockbuster trades and signings to bring in All-Star and future talents among the likes of Matt Kemp, Derek Norris, Melvin & Justin Upton, Wil Myers, Will Middlebrooks, Craig Kimbrel, and James Shields. 2015 was the year the Padres were poised to win the hotly contested NL West division and compete for a deep playoff run. 2015 was an utter disaster with the Padres placing 4th in the division at 74-88 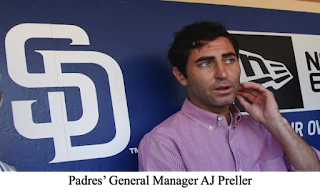 Beginning in the 2015-2016 offseason, Preller and the Padres began a massive fire sale to sell off all valuable talent in hopes to stockpile young prospects for the future. Since the beginning of this rebuild, Preller has either traded away or allowed all players acquired during the 2014-2015 to leave the team with the exception of Wil Myers. As the fire sale continued into the 2016 regular season, Preller began instructing Padres medical personnel to keep separate medical records for team purposes and for the league’s database. By altering medical records for the league database, the Padres were able to trade players with existing injuries to other teams without sacrificing what the Padres received in return. 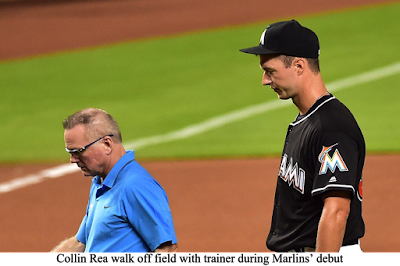 During the summer of 2016 the Padres were able to complete several trades involving previously injured players in exchange for highly sought prospects. On July 29th the Padres traded starting pitcher Andrew Cashner, and relief pitchers Tayron Guerrero and Colin Rea to the Miami Marlins for Jarred Cosart, Josh Naylor, Luis Castillo and Carter Capps. The following day Colin Rea was pulled during the 4th inning of his Marlin’s debut due to an elbow issue that was revealed to have been a pre-existing injury. August 1st Rea was sent back to the Padres for the recently acquired Luis Castillo and placed on the 15-day disabled list. After visiting with elbow specialist Dr. James Andrews, it was revealed Rea had torn his Ulnar Collateral Ligament and would be out for the rest of the 2016 season as well as the 2017 season.

The more controversial trade however occurred two weeks prior to the trade on the 29th when the Padres sent 2016 All-Star starting pitcher Drew Pomeranz to the Boston Red Sox in exchange for top pitching prospect Anderson Espinosa. Soon after arriving in Boston it was discovered Pomeranz had signs of inflammation in his forearm which drastically diminished his performance after the trade-deadline. Once Major League Baseball caught wind of what was going on, an investigation was launched which found that Preller and the Padres guilty of forging medical documents for the league database. On November 15, 2016 Major League Baseball suspended A.J. Preller for 30 days without pay for tampering with medical files specifically related to the Drew Pomeranz trade.

Baseball teams like the Padres have fewer stakeholders than a clothing company for example, however, their stakeholders have a much more direct impact on the teams and how well they perform as a business. Within the league itself, the stakeholders would typically include the Padres, the teams that traded with the Padre’s, the respective management and owners, as well as the player involved. However, given the circumstances and how often all 30 Major League Baseball teams interact with one another, this controversy may have an impact on all future interactions with the Padres organization. Outside of the league there are several key stakeholders that are affected by the Padres actions. Obviously the fans of all teams involved in these transactions are effected by the Padre’s actions, however, team sponsors, local broadcasting networks, and local radio stations all have stakes within a team and can serve to gain or lose based on a scandal like this. 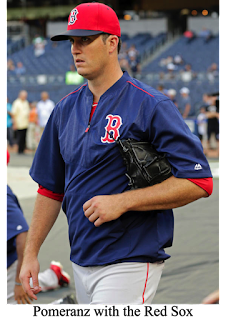 Individualism is an ethical theory that places the businesses best interests first regardless of other stakeholders. Under this perspective a business should aim to maximize profits for the owners of the business within lawful restrictions. Coming in to the 2016 regular season, the Padres had a payroll of $99,284,500 according to Business Insider (The Gap Between the Haves and the Have-Nots in MLB is as Big as Ever).  As of March 13th 2017, CBS Sports reports that the Padres have a payroll of around $75,000,000 due to several transactions made during the 2016 season (Padres are Spending More than Half Their Payroll on Players that No Longer Play For Them. The trades criticized by the league in this controversy were responsible for clearing about $10,000,000 of the $25,000,000 cut  by the Padres in the last year. As a result of the Padres' numerous transactions in order to sell off as many valuable players as possible, the team's success on the field suffered significantly. However, despite a poor 68-94 last place finish, the team ranked 15th in attendance according to ESPN (2016 MLB Attendance). With a total attendance of 2,351,426, the Padre's only saw a decrease of about 100,000 despite having a much weaker team. For the time being, the Padres did increase the team's income during the 2016 season despite the transactions making their actions ethical under an individualist perspective.


According to Utilitarianism, an action must prioritize the happiness of all conscious beings in order for said action to be deemed ethical. Under this perspective, the Padre's transactions during the 2016 season would only be recognized as ethical if all teams, fans, players, television stations and all other stakeholders involved gained some sort of happiness or satisfaction as a result. Due to the Padres' actions this just isn't the case as many stakeholder's suffered as a result of the trades most especially the teams that were wronged. In a joint statement issued by the Red Sox, Marlins, White Sox who had traded with the Padres earlier in the season for Padres starting pitcher James Shields, and an anonymous fourth team “(we are) enraged by what (we) perceived to be strategic deception: veiling medical information that could have been pivotal in trade discussions” (Fox Sports). As a direct result of their actions the Padres' performance suffered as a result of the trades and further upset fans as well as the Padres broadcasting network due to low ratings. In a September report by Forbes, Fox Sports San Diego, the Padres' broadcasting network, saw a 36% drop in rating from 4.13 to 2.65 during the 2016 season (Here Are the 2016 MLB Prime Time Television Ratings For Each Team). Clearly the Padres' did little to prioritize the happiness of stakeholders outside of their organization during the 2016 season and as a result their actions cannot be deemed ethical under a utilitarian perspective.

Established on the ideas and values of German philosopher Immanuel Kant, Kantianism requires that actions to be based on rationality, honesty and respect for the individual. Kant believed that all decisions should be made based on these values or that decision cannot be ethical. Kantianism strongly emphasizes the importance of not treating people or businesses as just a means to an end. In this circumstance, this is exactly what the Padres did throughout the course of the 2016 season. Because of the disaster which was the 2015 season, the Padres had to rebuild their team by trading away players with large contracts or allowing star players to leave in free agency. Rebuilds are a common occurrence in Major League Baseball, however it is the way in which they conducted their rebuild which violates the beliefs under the Kantian perspective. By doctoring the teams medical records, the team shows a blatant lack of honesty and respect towards stakeholders. The Padres took advantage of other teams by keeping private records to convince teams to trade away valuable prospects in return for injured players. By treating not only other teams, but players as well as a means to an end, the Padres violated the key tenants of Kantianism during their scandal.

Virtue Theory is an ethical perspective that is based on the essential virtues that Greek philosopher Aristotle felt people should embody. Aristotle believed that these virtues; honesty, compassion, justice and prudence to name a few, were key in benefitting societal wellbeing and that anything contrary to that was unethical. Only one of these virtues were displayed by either AJ Preller or his medical staff in the case of the transactions made by the San Diego Padres during the 2016 season. In order for the Padres to comply with the basic characteristics of Virtue Theory, they would have to exhibit these virtues in some way shape or form. By being truthful in their conducting of medical records and having transparency with their trade partners about the health of their players the Padres would be displaying honesty. Instead the Padres were dishonest by doctoring their player medical files for the leagues purposes and took advantage of other teams. The Padres could've shown some compassion to their injured players by taking the necessary precautions to maintain their long term health with rehabilitation. Instead, Preller and the Padres decided to trade these players quite literally across the country and have their new teams worry about their health. Rather than being prudent with their injured players, the Padres were negligent. Preller and the Padres allowed Drew Pomeranz to play in the 2016 MLB All Star Game with elbow inflammation in order to drive up his asking price just two days before trading him to Boston. The one virtue that the Padres did display during the 2016 season was justice. When Colin Rea was removed from his Marlins debut with elbow discomfort, the Padres reversed the trade that sent him to the Marlins and returned the prospect received in compensation. When Drew Pomeranz was diagnosed with elbow inflammation by Red Sox medical staff, the Padres offered the Red Sox the opportunity to return Pomeranz to San Diego, to which the Red Sox declined.

Under every perspective with the exception of individualism, the San Diego Padres failed to act in a way that can be deemed ethical. Their complete and utter disregard for the players, the teams, the fans, the owners, and all other stakeholders involved in this controversy is what make this situation unethical.