According to The Case Manual by Heather Salazar, a stakeholder is where a business has no direct responsibility to any other interest-groups in the context of business. Employees, suppliers, customers and the societies that the business impacts, are all examples of stakeholders. The stakeholders in the AstraZeneca Seroquel controversy are as follows: the patients, physicians, regulators, governments and payers. Due to AstraZeneca's irresponsible move on the anti-psychotic drug Seroquel, patients, physicians, regulators, governments and payers suffered because of AstraZeneca's actions. At first, AstraZeneca denied the allegations of Seroquel.

Between 2001 and 2006, AstraZeneca advocated the drug Seroquel to psychiatrists and physicians for disorders that were not covered by FDA approval. These off-label indications spanned a broad range of conditions. AstraZeneca promoted Seroquel to physicians who do not normally treat patients with schizophrenia and bipolar disorder. AstraZeneca had a duty and responsibility to the people and public, but they neglected to do so. People who were prescribed Seroquel, had a legal right to know that AstraZeneca was marketing their drug only for uses approved by the FDA. All AstraZeneca cared about at the time was how to boost sales and revenues. They neglected to inform consumers and the public about Seroquel.

Individualism is specific to the business context. The primary values of individualism are the business, the owner's choices and the profits of the business. The ethical rule of individualism is that business actions should maximize profits for the owners of a business, but to do so within the law. AstraZeneca failed to do so within the law. ABC News stated that AstraZeneca "illegally marketed the anti-psychotic drug Seroquel to children and elderly patients for uses not approved by the Food and Drug Administration." They intentionally marketed Seroquel, by "paying kickbacks to doctors," for various illnesses, which were never tested before. Basically, the patients were treated as test dummies for AstraZeneca.

"Under the Food, Drug and Cosmetic Act, pharmaceutical firms must specify the intended uses of a medicine in its new drug application." Once again, AstraZeneca failed to follow this law. Before a drug is approved, the FDA must determine whether it is effective and safe to use. When the FDA approves it, then the drug may not be marketed or promoted for off-label uses. These were not victim-less crimes. "Illegal acts by pharmaceutical companies and false claims against Medicare and Medicaid can put the public health at risk, corrupt medical decisions by health care providers, and take billions of dollars directly out of taxpayers' pockets."

Utilitarianism states that the best action is the one that maximizes utility. The primary value of utilitarianism is the happiness of all conscious beings. It is often interpreted as pleasure and the absence of pain, but sometimes as the satisfaction of desires. The ethical rule of Utilitarianism states that business action should aim to maximize the happiness in the long run for all conscious beings that are being affected by the business action. In utilitarianism, utilitarians believe the principles of morality of any given action. Utilitarian’s are concerned about the long-term costs and benefits of actions. They do this by determining the overall happiness of all the stakeholders involved.

In the AstraZeneca Seroquel scandal, the stakeholders are not happy. How do we fix this?  We need to measure the happiness of all the stakeholders affected by AstraZeneca's behavior and actions. To start off, AstraZeneca paid $520 million in order to resolve the civil suit that was brought about by federal and state entities, according to GEN Genetic Engineering and Biotechnology News. Also, AstraZeneca will pay $68.5 million, as part of a multi-state settlement, according to the Washington Post. The New Jersey Attorney General's Office describing this as the largest multi-state pharmaceutical settlement of its kind. New Jersey will receive $1.85 million from the deal, with thirty-six other states and the District of Columbia as party to the settlement.  Since the stakeholder’s happiness was not maximized, a utilitarian would argue AstraZeneca's actions were not ethical.

Kantianism is where rational beings have dignity and should be respected. The primary values of Kantianism are: rational decision-making, autonomy of individuals, and honesty and freedom. The ethical rule of Kantianism is to always act in a way with respect and to honor others and their choices. Do not lie, harm others or cheat in order to get your way. Instead, use informed and rational consent from all parties.

Kantianism is based on two moral principles. They are motivation and rationality. For any activity to be considered as rational, it must range with a concept known as "the formula of humanity," which states "it is wrong to use people as a mere means to get what you want. Treating someone as a mere means uses them or exploits them. It disregards their rationality and freedom and usually it involves an attempt to manipulate them. AstraZeneca did not act with any respect. They lied and harmed many people in the making. They cared about their revenues and profit, not if they hurt any people along the way. Instead of AstraZeneca admitting to their actions, they denied all allegations to Seroquel. There was evidence on how the drug was marketed, sold and what kind of side effects Seroquel had on patients and consumers.

The New York Times stated that, "most of the plaintiffs argued that they had been misled about the risks of diabetes and weight gain caused by Seroquel." Health and human services accused AstraZeneca of paying kickbacks to doctors, while promoting Seroquel for unapproved uses by children, the elderly, veterans and even prisoners. AstraZeneca acted unethically. "Seroquel's side effects, including blood sugar increases, weight gain and uncontrollable muscle spasms, have resulted in thousands of lawsuits from patients. AstraZeneca did not admit to any of this misconduct. The New York Times stated that AstraZeneca will have paid a total of about $1.9 billion to defend and settle the personal injury cases and government investigations. A Kantian would argue that AstraZeneca's behavior was not ethical.

Virtue theory analyzes a person's character. Virtue theory's primary value is to promote wellness or the flourishing of others within a society. The ethical rule of virtue theory is to act in a variety of virtuous or good character traits in order to avoid vicious and bad character traits. Virtue theory asks about a person's character. It evaluates whether a person is virtuous or not. Having courage, honesty, insight, care, compassion, leadership and teamwork are just a few of many virtues that can help business people thrive and be successful. As a pharmaceutical company, AstraZeneca does not indicate to hold any of these virtues. AstraZeneca cheated, lied and showed no compassion or care. When they were called out on their actions, they tried to argue and deny everything, when there was evidence and proof. AstraZeneca lied to the public and to their stakeholders. Due to those facts, AstraZeneca as a pharmaceutical company is not considered ethical or righteous in any way. 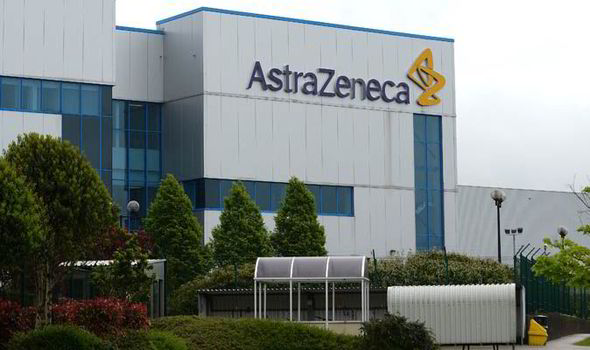 I believe AstraZeneca is to be considered an unethical and not virtuous pharmaceutical company. Their drug Seroquel made $4.87 billion in sales. Those sales were all based on cheating and lying their way up the ladder to what they call being successful. They neglected to inform consumers about the side effects and how the drug properly works and what it's main function was.  In their annual 2011 report, AstraZeneca stated that "we are committed to acting with integrity and high ethical standards in everything we do and our goal is always to improve health for patients and bring benefit for our stakeholders, our business and society." How can a company state something like this and act so unethically at the same time? When certain pharmaceutical companies find problems with a particular medicine, they continue to aggressively push the drug and hope they can make a billion dollars before someone finds out what is truly going on. That is exactly what AstraZeneca did with their drug Seroquel.

AstraZeneca targeted its illegal marketing of Seroquel to doctors, who do not typically treat schizophrenia or bipolar disorders. There were some cases where doctors were paid cash and others were sent to lavish resorts, where they were encouraged to market and prescribe Seroquel for unapproved uses. This is a huge problem. It is more than just a financial problem. The main issue here is that these physicians and doctors are being manipulated and played with in order to prescribe strong and powerful medications. With this result, the real problem then is the consequences to the health of the public and people.