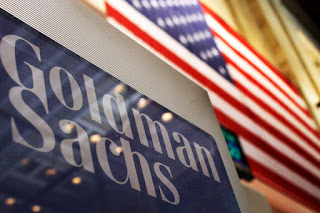 Goldman Sachs Group, an American multinational finance company located in Manhattan, New York, was founded in 1869 by Marcus Goldman who helped out small businesses secure short term capital by connecting them to different investors, acquiring a small profit in the deal for himself. Recently, the multi-billion dollar corporation's CEO and Chairman, Lloyd Blankfein, has dealt with numerous amounts of lawsuits filed against Goldman Sachs for actions of defrauding investors during the 2008 Financial Crisis. Goldman Sachs prediction of the United States economy plummeting, due to market players taking on more and more risk without offsetting it correctly, led the corporation to an opportunity of profiting off of the disastrous meltdown by "betting" against a financial product that the bank sold to investors with intentions of that product being flawed. Traders of Goldman Sachs elaborated the idea of setting up trades that would reduce long exposure to the mortgage market, causing the corporation to be net short, and intrinsically benefitting Goldman Sachs once the market collapsed. On July 25, 2007 Goldman Sachs bet against the U.S. economy led to a profit of $51 million in only one day. "Tells you what might be happening to people who don't have the big short," written in an email sent to Blankfein the same day. In total for the year of 2007, Goldman Sachs earned $17.6 billion in pretax income, including the hedge against the mortgage market equivalent to $4 billion.


In April 2010, Blankfein testified before Congress at a hearing of the Senate Permanent Subcommittee on Investigations stating that Goldman Sachs never had any type of moral or legal obligation to enlighten clients about the actions taken towards betting against the products being issued by Goldman Sachs because the bank portrayed itself as a market maker not a creator of the product. The company was sued on April 16, 2010 by the Securities and Exchange Commission for the practice of selling a fraudulent synthetic CDO tied to subprime mortgages reaching a $550 million settlement, but it didn’t stop there. In 2013 Fabrice Tourre, a former Goldman Sachs bond trader, was found liable for fraud, paying the S.E.C. $825,000 in penalties and other costs for costing investors $1 billion for participating in a failed mortgage deal, which helped plummet the U.S. economy into the worst recession the country has seen in decades. By early 2016, Goldman Sachs reached a $5.1 billion settlement including U.S. Department of Justice, the New York and Illinois Attorneys General, the National Credit Union Administration, and the Federal Home Loan Banks of Chicago and Seattle, which finally puts claims by the government of selling fraudulent mortgage deals. Breaking the cost down, Goldman Sachs agreed to pay a $2.4 billion civil penalty, pay $875 million in cash, and $1.8 billion in consumer relief.

Individualism
The ethical theory of individualism describes that the only goal of business is to profit, so the only obligation of a businessman is to maximize profit for the owner or the stockholders doing so in the eyes of the law (Salazar). The opportunity Goldman Sachs took advantage of during the Great Recession led them to maximizing their profit for the year of 2007, but doing so in a manipulative and illegal manner. By selling faulty home mortgages that the bank knew would eventually implode, Goldman Sachs was accused and eventually sued billions of dollars to finalize a settlement. Individualism's key meaning of maximizing profit was successfully achieved by Goldman Sachs by seeking out information about the economy, theorizing ideas about the detrimental effects of what will take place, and developing a plan to benefit the corporation once the crisis took place. The problem is that Goldman Sachs did so in an illegal and unjustified manner, which goes against the ethical theory of individualism.

Utilitarianism
The ethical theory of utilitarianism states that businesses should maximize the happiness in the long run for all conscious beings that are affected by the business action (Salazar). Goldman Sachs erroneous actions of selling faulty mortgage deals did not exactly fit the criteria of following the ethical theory of utilitarianism. In fact, the actions of Goldman Sachs not only didn't make people happy, but potentially costed people their jobs and houses while putting them into major debt due to misleading investors into buying a faulty product. The only stakeholders benefiting from Goldman Sachs actions are the employees and shareholders, but even those individuals involved aren't happy under the circumstances that took place.

Kantianism
The ethical theory of Kantianism states to always act rationally by never exempting yourself from rules, helping people make rational decisions, respecting peoples' needs, and seeking to do what is right because it is right. Goldman Sachs actions during the Great Recession didn't follow Kant's theory because they don't follow the basic principles of the theory stated above, as well as the formula of humanity that states, "Act in such a way that you treat humanity, whether in your own person or in the person of another" (Kant). Goldman Sachs did not act in a rational way during the financial crisis and even after it. Goldman Sachs tried to hide in the shadow once investigations started to take place in the financial industry. Instead of coming out and confessing for the wrongful actions that took place, the bank tried to avoid any consequences by hiding, which shows signs of the bank attempting to exemplify itself from the law. Goldman Sachs didn't follow through to be motivated by good will, but instead lied to investors in order to benefit the corporation.

Virtue Theory
The virtue theory consists of 4 different characteristics that include courage, honesty, temperance, and justice. Only if a business acts in ways that fit the description above shall it follow the theory of virtue successfully. Goldman Sachs upheld none of these characteristics during the controversy of the financial crisis. To act with courage refers to a business acting in a beneficial way to take a stand for the right ideas and actions, which Goldman Sachs did not follow. Instead, the corporation took action by cheating their own investors selfishly in order to earn a profit. A bank that cheats and lies to clientele shows no sign of trust worthiness, which describes the second reasoning for why Goldman Sachs does not fulfill the requirements of living up to the virtue theory. Goldman Sachs had also shown no signs of temperance, which applies to a company's expectations and desires. "Our client's interests always come first", refers to the bank's expectations, but did not live up to when the actions of fraudulent content were taking place. Lastly, Goldman Sachs did not demonstrate any action of upholding justice considering the fact that the bank was selling faulty products that were intended to implode. Goldman Sachs is expected to be a corporation that consumers feel safe doing business with, but was not the case during the tragic time period and showing no signs of following the ethical theory of virtue.

Justified Ethical Evaluation
Goldman Sachs mendacious actions during the period of the financial crisis show signs of selfishness and greed. The company took advantage of an opportunity where profit maximization could be achieved, but achieved in an unethical and moral doing. The fraudulent actions of misleading investors into consuming products that contained high risk led the bank to profit a substantial amount, while watching the entire U.S. economy collapse in front of their eyes. Goldman Sachs shown no sign of acting ethically or morally correct. In fact, the actions that took place around the time period of the Financial Crisis portrays an image to the rest of the world describing how banks will say and do whatever it takes to make sure the corporation does not fall. In my opinion, Goldman Sachs actions were unprofessional, manipulative, and straight up unethical for the reason of part taking in a role that caused devastation.