Ryanair, founded in 1985, is an Irish airline known as the “low cost” airline. The company currently has a fleet size of 298 Boeing 737-800’s. With all these aircrafts, the company employs 8,500 individuals as pilots, flight attendants, and counter workers. In 2004, Google named Ryanair as the most popular airline. As the company grew, people started to select this airline over many others. The current owner of Ryanair is Michael O’Leary, who has been at the helm of the company since 1994. Throughout Mr. O’Leary’s tenure as CEO, he has constantly been criticized by the public for having such an abrasive management style. This company started in 1985, with a staff of 25 people. Then, a year later in 1986, the company serviced two turbo prop BAE748 aircrafts, flying roughly 82,000 passengers. Then, after much success in the first four years, in 1990 the company lost $20 million dollars. Fast forward to 2011, and the company had 75.8 million passengers board their planes over the course of the year and revenue of $4.2 billion. After the company growing exponentially, they have decided to make extremely cheap airfare rates, but the controversy started when they started charging passengers for reasons they should not have.
Ryanair has created many charges that have caused controversy. This company has a revenue of $503 million. Inside that number, over 20% of their revenue has come from sources outside of airline tickets. The reason this company is bringing in more than 20% of their revenue is due to many different rates. Ryanair currently charges $208 for a name change on your boarding pass, a boarding pass fee of $40, excessive luggage fee of $28 per kilo, credit card use fee of 2% of the total amount, a reserved seat fee of $13, a checked musical instrument fee of $83, and if you want a bottle of water on this airlines aircraft that will cost you $3.50.
This company charges many different fees and they are currently causing controversy with customers due to what is going on inside the cabin of the plane. On a Ryanair aircraft they have non-reclining seats, no seat back pockets, their flotation devices are in the overhead compartment, they have “standing room only” flights, and passengers must load their own bags onto the plane. Other ways this company is bringing in such a large profit is due to removing two toilets to get one extra seat on their planes; therefore they only have 1 bathroom on board. To use this bathroom, it will cost you $1. 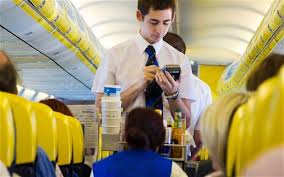