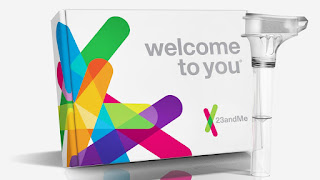 23andMe is a company where anybody curious about their genes can go online and order a kit to get results. Without the traditional doctor’s office visit. People join because they are interested how much Italian is still in their blood, or why they sneeze when they look directly at the light. On a more serious note, by purchasing a different kit, a person can discover possibilities of contracting certain illnesses or diseases, all discovered through their genes.  This can be done as easily as ordering a kit for $99 or $199, depending on what kind of results you are interested to get out of it,then adding a sample of one's saliva into a test tube to mail back to the company.

23andMe is under a lot of scrutiny since recent partnerships were made with outside medical companies.  As 23andMe has over 5 million customers, that means 5 million people’s genes the company has stored in their database. Once you send in your saliva, the company has your DNA and the information that comes with that forever. 23andMe has been partnering and making deals with outside research companies, essentially selling access to their database which is full of customer’s data. This concerns customers, and they feel their personal information is being exploited while 23andMe is making a profit.

One of the most significant deals 23andMe made, was with the company Glaxio Smith Kline (GSK) in June of 2018. This was a 4 year deal in exchange for a $300 million dollar stake in 23andMe. Glaxio Smith Kline is a pharmaceutical medication, vaccine, and healthcare manufacturer. With this partnership, 23andMe has given access to GSK to use their database for their own pharmaceutical and medical research.

Similarly, another partnership made was with the company Pfizer in January of 2015. Pfizer’s goals are to strengthen the public healthcare system globally, especially in underprivileged parts of the world. Pfizer also was given access to see 23andMe’s data in hopes to advance their research.

Lastly, a public deal 23andMe made was with a second pharmaceutical company called Lundbeck in 2017.  Lundbeck focuses all of their efforts into making medications for psychiatric and neurological disorders such as depression and bipolar diseases. These two alone, impact 16 million people in the United States. Lundbeck has also been granted by 23andMe access to their customer’s genetic information.

For each of these companies partnered with 23andMe, the access to this much data is something that these companies would never have had access to.  Haydeh Payami, from the New York State Department of Health admitted, “What 23andMe did in a matter of years, would have taken several decades and tens of millions of dollars if done conventionally.”  This exhibits 23andMe’s motives behind making these deals, but customers are still feeling violated of their privacy. There is an online statement regarding all company required agreements, that every customer must digitally agree to, which at the end includes a check box granting 23andMe permission to use one's information in outside studies. When reading the statement, which arguably most people don’t, the box is already checked off saying you will agree, but you are able to uncheck the box. Inlcuded in this statement is informing csutomers that if at any point if someone feels their data is unsafe, they can easily access their online 23andMe account and “opt out” of the research. 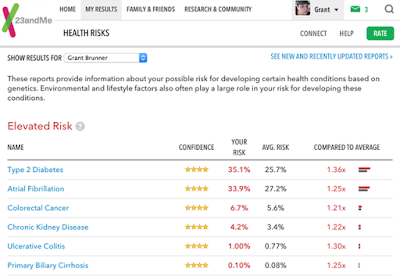 Stakeholders involved in this case include each individual company, 23andMe, including anybody who is affiliated, along with customers, interested customers, or the people hoping for advances in medicine to be made through the research made possible by 23andMe.

As there are two sides to every story, there is discussion as to whether what 23andMe is doing is ethical or not. Customers feel violated, and 23andMe feels they are benefiting the world of heath.  Customer’s permission seems to be deceiving, but it is accessible to everybody.  Individualism, Utilitarianism, Kantianism, and the Virtue Theory will analyze whether 23andMe is acting "right" or "wrong".

Individualism
Based on individualistic beliefs, an individualist simply focus on the individual, and in some cases the company can be that individual. It is important that whatever matters to the company, matters to only them and the owners of the company. It is essential to maximize profits, and make sure those profits go directly back to the company. 23andMe charges a significant amount for their kit, and is making deals with other companies in exchange for money. They are surely profiting as shown in the deal made with GSK for $300 million, especially as they become more popular. They profit as a company every time they partner with companies. An individualist would consider these actions as indeed focusing on themselves while making money, therefore acting ethical within individualistic terms.

From a Utilitarian perspective, 23andMe is responsible for causing different stakeholders’ happiness and unhappiness. A Utilitarian is concerned with happiness, and keeping everybody happy both in and out of the company.  The reason for 23andMe’s partnerships are for the greater good of the medical industry.  They know they have more genetic data that any of these companies possibly can ever get their hands on, and they’re using it to improve research. This is being done to create medicines and solutions to heal people with thousands of diseases…making people happy. 23andMe is also happy, as they are following their mission statement which mentions people having the chance to “benefit from human genome.” Companies who work with 23andMe are happy as their research abilities are being accelerated. Negatively, is how customers feel. They feel deceived when they hear about 23andMe’s deals. The data they trusted the company with is being what seems like handed out. Overall, the pros outweigh the cons according to the utilitarian stance on the topic, making one agree that what 23andMe is doing is ethical. Utilitarians would only then recommend that something would be done about how customers are upset.

Kantianism
According to a Kantian, 23andMe’s actions would be deemed ethical. To a Kantian, there are basic principles which start with rationality. Every decision should be treated rationally, and making sure others make rational decisions as well. After that, essentially respecting each other and being motivated by Good Will are the values Kantians follow.  Considering the actions of 23andMe, everything they do is rational. They have an entire honest privacy statement on their website for any concerned customer who takes the time to look. Their decisions are to work with legitimate medical companies with all intentions to make a difference.  Nothing done by 23andMe has been irrational. They openly respect customers as they can opt out of the studies at any time. Most importantly, they act upon Good Will. They have their separate and unrelated business, but chose to enlist their data into something bigger to make a bigger difference.  Using the Formula of Humanity, 23andMe must act in a way that they treat humanity for yourself or others at anytime; and they do that. Yes, they do benefit financially out of collaborating, but its to benefit all ends of the spectrum. 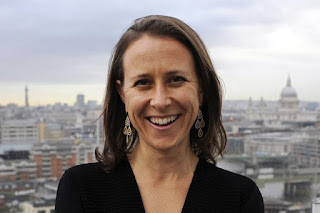 Viewing this case from the Virtue Theory perspective, the collaborations being made are certainly ethical. The Virtue Theory focuses on the four main virtues: courage, honesty, temperance/self control, and justice/fairness.  By analyzing courage first, 23andMe is in fact showing courage as they are taking a stand for what they believe in as listed in their Mission Statement, to benefit from human genome.  With these partnerships, “benefits” are being made possible. In terms of honesty, attempts are made to inform customers about partnerships and that their genes are being used in the study. For temperance or self control, 23andMe is showing significant amounts of it. With the major database that they own, they are being offered millions of dollars by so many companies in exchange for access to their database. Government wants their data as well, and they decline these offers and keep their collaborations to a minimum that they believe in the most. Lastly, justice and fairness. Customers are given the option to opt out whenever they feel their information is being exploited. With a simple google source, every person has access to know this. The CEO of 23andMe, Anne Wojcicki even sent a letter out to all customers at the beginning of the GSK partnership reminding anybody who wants that they can opt out. People choosing not to read is not at the fault of the company.

Action Plan
This is a controversy that is creating bad publicity for a company which is, according to all four above ethical theories, deemed as ethical.  Looking ahead for the organization, steps can be made to create a more positive image for the company, while ensuring the comfort in existing and future customers in trusting 23andMe with their genetic data.

To start, 23andMe needs to increase their methods of honesty. Beginning by giving a statement with more information to everybody about their current and future inputs into research. A lot of the upset customers don’t get the opportunity to be upset about where their information is going, they’re too upset that they did not know that their information was ever leaving. 23andMe needs to make a statement to all the confused customers describing the safe companies which have access to the database, and what their intentions are. The next step, similarly, is to be sure that every new customer is aware of their options before they even take that first step in spitting in the test-tube. It is important that not only they know, but it is marketed in an exciting way. Many people would be happy to support the research 23andMe is collaborating with. It just needs to be expressed in an exciting way, telling them that this is an opportunity to help society by including oneself into the studies, as it can be in the long run.  In order to ensure a new customer is aware, 23andMe needs to not hide the permission box at the end of a long agreement form. Implementing a physical paper flyer into the kit so that this form must be seen during a customers most interested point, while receiving the kit. This can be a perfect way to get that information across.

With this new marketing plan, the Mission Statement needs some tweaking. Currently it states, “To help people access, understand and benefit from the human genome.”  To include the excitement and opportunity piece about enrolling that data into medical research, not only is more honest, but it could entice people more!