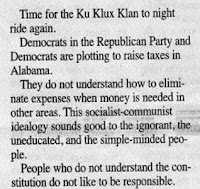 On February 14th 2019, Goodloe Sutton, the editor and owner of the newspaper Democrat-Reporter wrote : "Time for the Ku Klux Klan to night ride again" to call on the racist Community to resurface in the United States. The journalist justifies his comments by saying that he is against raising taxes in Alabama. He wants the KKK to "clean up" in Washington D.C. to eliminate Democrats who want to raise taxes. According to Goodloe Sutton, Democrats are plotting for raising taxes, fees and duties in Alabama and the Ku Klux Klan would be a good organization to counter these decisions. 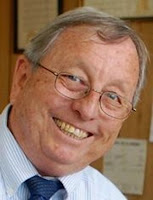 He describes these politicians as social-communist and defends his ideas with violent words, trivializing violence and racism. Indeed, the writer minimizes the crimes of the racist organization by talking about a limited number of people killed and the fact that the clan only acted when the situation was legitimate. For the publisher, his comments are not inappropriate, since he believes that Democrats are dangerous for the United States and that they will transform the country into a communist state. Goodloe Sutton calls for the hanging of democrats and the lynching of groups which have communist ideas. 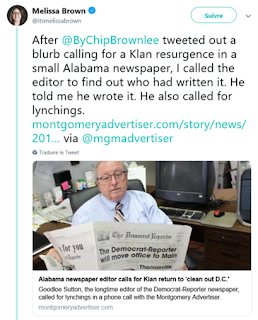 As a result of this article, many politicians, readers and people in the world of journalism, stop subscribing to the newspaper. The University of Southern Mississippi's School of Communication removed Goodloe Sutton, who was one of their students, from its Mass Communication and Journalism Hall of Fame because of his recent racist remarks. Moreover, the representatives of the University of Southern Mississippi's School of Communication said : "We strongly condemn Mr. Sutton's remarks as they are antithetical to all that we value as scholars of journalism, the media, and human communication." Goodloe Sutton also lost his distinguished community journalism award, from Auburn University, that he had received in 2009. This controversy led to the editor's dismissal. Irony of fate: the editor's subsitute is an African-American woman : Elecia R. Dexter, a professional in management, human resources and politics.

This scandal affects many people who are considered as the stakeholders of this controversy : Goodloe Sutton since he is the one most affected by the consequences of his article, everyone working for the newspaper because this controversy affects the reputation, growth and profit of The Democrat-Reporter, the newspaper readers because this scandal upsets their confidence and their view of their usual magazine, Democratic politicians who are attacked for defamation and the victims of the Ku Klux Klan who were hurt by the innapropriate comments.

An individualist won't approve this scandal because the newspaper lost its reputation, customers, Awards, honors and Goodloe Sutton lost his job, which does not maximize the profit of the business. Moreover, Goodloe Sutton's words incited hatred, violence and riots and his article is a defamation of democratic politicians. For all these reasons, we can say that Goodloe Sutton did not act in accordance with the law. Individualism considers this case as unethical.
According to Utilitarianism, Goodloe Sutton didn't act in an ethical way. First, the publisher has lost, as a result of his article, his awards, his popularity with readers and his work for the newspaper.  Secondly, the company's reputation and image have been damaged by these racist and violent statements and the credibility of other writers has been disrupted, which doesn't maximize employees' happiness. Thirdly, the Democrats who suffered from defamation are affected by this article because they are described as social-communist and dangerous to society. Finally, those affected by the Ku Klux Klan are wounded by this article, which recalls a racist, xenophobic, violent and even murderous era in which they were victims.
Kantianism also qualified this article as unethical because the reporter didn't treat people in a humane and respectful way. Democratic politicians received defamatory comments because the publisher spoke of them as socially dangerous social communists. The former victims of the Ku Klux Klan had a look back at a difficult time for some communities. The clan's crimes were violent, racist, anti-Semitic and murderous, and had physical but also psychological consequences for its victims. The people working for the magazine were hit by this event because the business lost a lot of audience, money and its solid reputation.
Virtue theory requires four important qualities and Goodloe Sutton only filled one, which shows that his behavior was unethical. First, Goodloe Sutton's courage is high since the publisher is taking risks to take a stand for his ideas and actions. However, Sutton’s ideas are not considered as right because the writer stands for racism and violence. Secondly, Goodloe Sutton assumes his extreme and racist point of view and is perfectly honest about his way of thinking with his readers. However, concerning the temperance, Goodloe Sutton, through his article, did not demonstrate reasonable expectations and desires because he was influenced by his vices. Finally, the fourth quality is not represented by Goodloe Sutton's article. Indeed, the publisher did not demonstrate justice through his words because his ideas were neither good nor fair.

In my opinion, the journalist did not act correctly in writing this article. By imposing his extreme and racist views, he shocked many people. Freedom of expression is certainly part of the United States' First Amendment, but Sutton's comments went beyond the limits. The publisher has made comments that are racist, extreme, inappropriate, violent and defamatory, which is against the law. That's why, I think less power and importance should be given to the editor in order to avoid such mistakes. The other journalists are all responsible for the content of the article since they all represent the magazine. They could have checked the editor's comments given his previous racist and borderline references.

In the short term, I think it is important that the company aologizes for Goodloe Sutton's publication. Through a news release, other journalists can clear themselves of Sutton's comments, which were not approved by the rest of the team. By apologizing, the magazine can regain the confidence of its readers by showing its willingness to improve. Acknowledging its wrongs is a good way for The Democrat Reporter to move forward Following the controversy and to mark this event as a turning point in the history of business. This controversy has made very bad publicity for the newspaper, regaining the confidence of readers will be difficult but not impossible given that this is the first major scandal since the creation of the newspaper.


In order to avoid this kind of incident, I think it is important to establish a better communication strategy between all employees, on the long run. Of course, each journalist has his own article, but it is important that his colleagues can read it and correct it before it is published. This will allow each journalist to have criticism from an external point of view and thus improve his article. The magazine could then establish a rule such as a ban on publication if the article has not been checked and validated by at least 3 other journalists and reporters. This new policy requires good communication and open-mindedness within the team, which will improve collaboration. 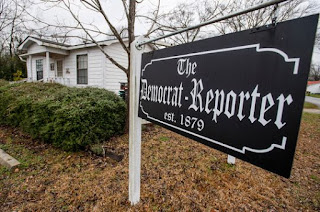