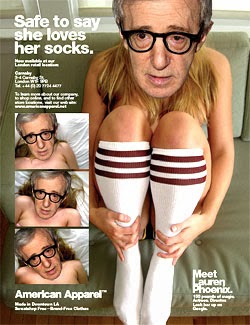 
The American Apparel clothing company is a vertically integrated clothing company that not only manufactures their clothing but distributes, does retail, and even markets itself in the United States. From employing illegal immigrants to holding meetings in the nude, to even illegally using celebrity endorsements, clothing maker American Apparel has a long history of drawing attention to itself whether it be legal or not. Oddly enough this unprofessional, risky business makes up a decent portion of the clothing export sector out of the few American companies that still export, and can actually say "Made in the USA." The company is known to be a very outspoken company on grounds to promote labor policies that exclude the use of clothing manufactured in sweatshops. By doing this, American Apparel forces the public to focus on their good intentions, therefore the company can pretend they have an ethical stance with individualism. With American Apparel making the public believe that the company is moralistic and emphasizes good individualism, gave the marketing branch the belief that they were in the clear in the public eye. This made the company believe they could try out some risky tactics, whether they were legal, ethical, or even smart. 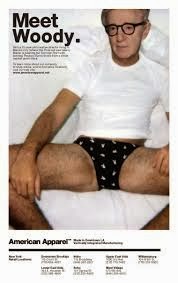 As seen in the first picture, American Apparel even tried to draw publicity for the company with intentions to gain more overall sales through all the attention they got for the stunt. Yet with this advertisement American Apparel didn't even to seem to care that no matter what could come of this stunt slandering Woody Allen, by photo-shopping him onto Lauren Phoenix's(a porn star) magazine spread. One can assume American Apparel's highly paid marketing firm Adage, in charge of this stunt was considering utilitarianism to some extent, maybe even took the ethical theory of utilitarianism to the extreme. Since the firm knew they were going to get sued for illegal use of celebrity endorsement and other lawsuits that came with the stunt, the firm notified the company's stakeholders of stunt ahead of time. Therefore arguably, the company can be considered utilitarian, even big believer's of the theory since they notified their stakeholders, and weighed the benefits of the entire stunt to find that the bad publicity was actually in their best interest. Yet this can only be considered ethical in only a few aspects, yes it was financially beneficial for the company as a whole, but in the end still slandering Woody Allen in the ways they did, was undeniably unethical. With the additional revenue outweighing the repercussions with pulling this stunt the company learned to utilize this questionably unethical tactic even more and didn't show signs of stopping. 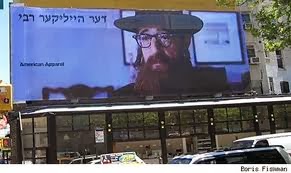 According to CEO Dov Charney, the vision for the brand is that of a “heritage brand. It's like liberty, property, pursuit of happiness for every man worldwide. That's my America." This quote by the company's CEO easily demonstrates a sense, and claims to strive toward a very similar philosophy to Kant's theories, yet do they actually back it up? Absolutely not; by just simply referring to the Woody Allen stunts the company pulled, easily demonstrates how the company breaks Kant's formula of humanity. One of the biggest points that the company failed to honor with regards to the formula, is that the formula stresses the respect for all that everyone should demonstrate universally. Obviously there wasn't any sign of respect directed towards Woody Allen, the stunt easily demonstrated the complete opposite. 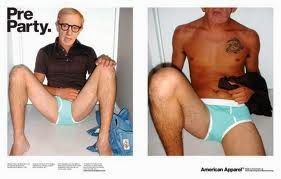 The ruling on the lawsuit that Woody Allen imposed on American Apparel, easily shows how American Apparel's decision makers don't truly follow much of the overall message that defines the Virtue theory, but in someways satisfies the four primary virtues, yet not always in an ethical manner. Adage does represent courage, which is one of the four primary virtues, but with the risk-taking they willingly made wasn't to take a stand for the right idea. The idea at hand is technically only right in the sense that it was the right action for the company in a financial aspect, but undoubtedly not right in any other aspect, especially in regards to what is ethical. The company attempts to show that they have honesty by claiming they are big believers in banning any type of sweatshop environments. They never beat around the bush, their temperance is relatively good, their expectations, whether they were truly reliable due to the risk, never seemed to be incorrect. Every intention and desire they attempted to satisfy inevitably worked out in the companies best interest, its not much of a surprise they won so many awards for having the best marketing in many varying ways. Technically the company's decision makers had certain characteristics that can be tied into having intentions of justice, such as producing quality products that are made exclusively in the US. One can also argue they had good ideas since they were so bold and successful, which also happens to demonstrate hard work too. It all draws a messy conclusion, even though most of the four primary virtues were satisfied, the overall point of the virtue theory isn't satisfied. The four primary virtues were generally satisfied in either an unethical practice, or only triggered to be dealt with because of specific events that happened to unwillingly force the companies action to save their own personal interest.