International optics manufacturer Olympus became target or major suspicion towards the end of 2011, after a suddenly shift in management. During May of that 2011, Michael Woodford was named president of Olympus Corporation. Months later, at the end of November, he was promoted to Chief Executive Officer of the company. Two weeks later, he was removed from the high office of the company. Later, he disclosed that his removal stemmed from no fault of his own, rather he was asking questions. Suddenly, this led to countless other questions, with finger pointing towards Olympus becoming increasingly popular. Tsuyoshi Kikukawa, former chairman, than took over the CEO title, and frankly adopted the mess that ensued. It was then discovered that the case was a tobashi scheme. A third party was helping Olympus, by illegally organizing their portfolios in a manner where company losses would be hidden. Fake accounts were developed to hide this money, and to allow their own account to look successful. One specific case, in 2008, included a $2.2 billion deal with an equipment maker. While this seems reasonable, 31% of this price was paid to a third party investment company, to keep the activity “off the books”, or in fake accounts. In another case, Olympus acquired three smaller Japanese companies. A year after the acquisition, the assets were recorded at a value of $721 million less than acquisition value. As such, they avoided huge tax expenses in the activity. Olympus defended its actions, claiming, “No dishonesty or illegality in the transaction itself”. Ironically, days later, Kikukawa resigned from any association with the company, and the next line of management admitted to the multiple examples of accounting fraud.US attorney Preet Bharara called it, “an international shell game with hundreds of millions of dollars of assets in order to allow Olympus to keep a massive accounting fraud going for years.”

Individualism and The Economic Theory are two closely related concepts. Based upon these concepts, individualism is viewed as egoism + rights-based constraints. Basically, this is selfishness with restriction. More specifically, individualists argue that everyone has the power to make their own decisions in life, and do what they want. However, no one can decide for other people. In this sense, everyone can live the way they want. Milton Friedman, 20th century thinker, claimed that the only goal of business is to maximize profits. An individualist would view the Olympus case as one in which the company was “living to fight another day” as the expression goes. They were (supposedly) making a large profit, even if they were doing so unethically. Before the scandal, the view of Olympus was one of success. Potential investors saw their huge profits and lack of mistakes or large expenses financially. After the scandal, however, this began to change. Even after the extreme overhaul in management, investors were skeptical to put their money on the line, with the negative record of Olympus. A company such as Olympus would have been very successful if they kept their accounting practices legal. Profits were there, the management was just greedy. Certain actions provide positive aspects for some, and negative aspects to others, just as Desjardins wrote,  “every business decision affects a wide variety of people, benefiting some and imposing costs on others”. The issue becomes compounding mistakes. Once you begin unethical and even illegal practices, it now seems more decent to do it again.
Utilitarianism combines the ideas from egoism and altruism, into one idea of maximizing happiness in you, as well as in others. Further, happiness and pleasure is considered the only thing necessary. A utilitarian would argue that Olympus actions’ were intended to emit happiness in all involved. They were putting their reputations on the line, for them to feel happy, for stockholder’s to feel happy, and for customers to feel happy. This leads to one major shortcoming of utilitarianism that ends don’t justify means. The benefit to the actions of Olympus is obviously the money. The company profits more, stockholders are paid out more, customers are provided necessary products, and society if unaffected. However, the costs, as Olympus found out, highly outweighed the benefits once the truths were revealed. The major cost was clearly the $687 million payout to the Securities and Exchange Commission. Further costs included distrust in the performance of the business following the scandal. Stockholders had difficulty trusting that their dividends would be paid out. Desjardins refers to utilitarianism as “the greatest good for the greatest number”. Clearly, the greatest number of society did not get the greatest good in this case.
Kantianism consists of four main parts. First, it states that people need to act for a reason and purpose. These actions must be consistent, and no one is an exception to this rule, even the top management of a company. The second part continues that individuals must promote others to make rational decisions. The third part simply states that individuals must respect one another and their differences, while the final concept implies that humans must be motivated in their actions by Good Will. In other words, doing what is right because it is right. Desjardins introduces two main topics, claiming, “…we are required to treat people as subjects, not as objects” and “…(humans) should not be treated simply as a means to the ends of others”.   Kant’s ideas are summarized in his Formula of Humanity, in which he states, “Act in such a way that you treat humanity, whether in your own person or in the other person of another, always at the same time as an end and never simply as a means” (Kant, MM 429). It is clear that Olympus acted for a specific purpose and reason, as selfish as it may have been. The top management supported one another in these decisions at the time, which is why the truths were not revealed until new management members were announced. The actions begin to take a turn in Kantianism with the third part, respecting others, and definitely the final part, being motivated by Good Will. With false audits, reports, and records, Olympus was lying to its investors, many of whom ended up losing a great deal of money following the scandal. By acting with more regard to long-term consequences, Olympus would have conformed to this idea of Kantianism. Instead, they fully focused on maximizing short-term profits. In her Kantian Business Ethics report, Salazar writes, As members of humanity, we each have value that stems from our rational and moral capacities and we all ought to act so as to show appreciation for that value”. The moral capacity referred to here is a large missing part of the actions of Olympus. 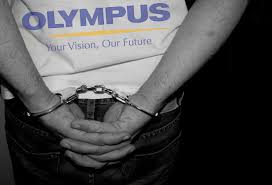 Any successful business if often said to run like a “well-oiled machine”. Many people take many different interpretations from this. Virtue theory is in many ways one of these interpretations. Anything functioning properly has certain characteristics, called virtues. In business, philosophers use four main virtues. They are courage, honesty, temperance, and justice. Olympus is a great example of one extreme end of the spectrum, the one businesses attempt to avoid. It begins with courage, which involves taking risks and standing up for the right ideas and actions. Clearly, the right ideas and actions were not supported by Olympus, because they themselves did not even practice them. Honesty is possible the most obvious, because they admitted to filing false audits. The next is temperance, which was not demonstrated by Olympus because they did not have reasonable expectations of their potential profit, both short-term and long-term. Finally, part of justice, the last virtue, includes fair practices, which once again was a large part of the scandal. Better planning, part of the temperance part, most likely would have led to better goals, and they could have avoided having to file any false paperwork. Instead, they are stuck “playing from behind”, as the saying goes, to prove to investors and society that they are beyond the effects of the scandal.
References
DesJardins, Joseph R. "Corporate Social Responsibility." An Introduction to Business Ethics. 5th ed. NY, New York: McGraw-Hill Companies, 2014. 49-78. Print
Eavis, Peter. (2012, December 20). U.S. makes arrest in Olympus scandal. New York Times. Retrieved February 10, 2013 from http://www.nytimes.com/2012/12/21/technology/us-makes-arrest-in-olympus-accounting-scandal.html?ref=olympuscorporation
Greenfield, Karl T. (2012 February 16). The story behind the Olympus scandal. Bloomberg Businessweek. Retreived Febrary 10, 2013 from http://www.businessweek.com/articles/2012-02-16/the-story-behind-the-olympus-scandal
Salazar, Heather. Business Ethics, Economics, and Individualism
Posted by Unknown at 1:46 PM