Beam Suntory Inc. is a Chicago-based distillery that is known for making the popular Jim Beam bourbon and Maker’s Mark bourbon. In the third quarter of 2006, they expanded their market overseas to India. However, they did this through illegal methods that violated the Foreign Corrupt Practices Act of 1977 (FCPA). According to the federal complaint, Beam Suntory Inc. was charged with conspiracy to violate the anti-bribery provisions, the internal controls provisions, and the books and records provisions of the FCPA between the time they acquired business in India in 2006 through the third quarter of 2012. During this time frame, Beam payed bribes to multiple Indian government officials, failed to implement and maintain an adequate system of internal accounting, and maintained false accounting records. Because of the illegal practices in India, Beam Suntory Inc. is paying about $19.6 million to settle the federal criminal charges. This comes 2 years after the company agreed to pay $8 million in penalties to the Securities and Exchange Commission (SEC) for falsely recording bribes as commission expenses.

Beam Suntory is one of the most popular distillers in the United States that is best known for making Jim Beam and Maker’s Mark bourbon. They have recently been in the news because they are being made to pay about $19.6 million to settle federal criminal charges stemming from charges for conspiracy to violate the Foreign Corrupt Practices Act (Chicago Tribune). Between 2006 and 2012, Beam and its Indian subsidiary Beam Global Spirits & Wine (India) Private Ltd. (Beam India) paid bribes to Indian government officials, including corrupt payments to obtain or retain business in India. Most of the corrupt payments were made through third-party sales promoters and distributors. The goal of the bribes were to “secure orders of Beam products at government controlled depots and retail stores, obtain prominent placement of Beam products in government retail stores, acquire and renew label registrations and licenses, and enable the distribution of Beam spirit products from Beam India’s Behror bottling facility to warehouses in other states throughout India” (US Department of Justice). In order to get the money used in the bribes to the third-party sales promoters and distributors, Beam implemented a pass-through method of overpaying third-party sales promoters and distributors that could use the extra funds for the bribes. Beam has been accused by prosecutors for passing through overpayments totaling $2 million (UPI).

In one case, Beam paid at least one bribe to an unnamed senior Indian government official. This bribe was for 1 million Indian Rupees, or about $18,000. The intent of the bribe

was to obtain the approval for a license that the company needed in order to break into an already highly restrictive Indian market so they can bottle a new line of “Ready-to-Drink” products. The bribe was authorized by an unnamed high-ranking executive of Beam’s Asia Pacific and South America regional business unit, who advised that it should be made through a third-party bottler of Beam’s subsidiary, so it was concealed using the pass-through overpayment method (Wall Street Journal).

To go along with the bribery scheme, Beam was also accused of failing to implement and maintain an adequate system of internal accounting controls that could provide assurances that the financial reporting and that the preparation of financial statements being done was reliable. Had an adequate system been put into place, Beam India’s practice of bribing Indian government officials could have been detected and brought to an end. Additionally, Beam was cautioned on numerous occasions that there was a need to implement sufficient compliance measures and internal accounting controls that were related to risks associated with improper activities by third parties in India. Despite these recommendations, Beam failed to both adopt recommended actions and address the concerns the actions were meant to alleviate for several years. Beam also failed to conduct thorough due diligence on Beam India before it acquired the business in 2006. Following internal audits of the Indian business, Beam failed to take sufficient steps to resolve issues related to identified deficiencies in the accounting controls in India and for a lack of supporting documentation for credit notes, promotional expenses, and vendor discounts until after 2012, when the company cooperated with the US government and took corrective action (US District Court, Northern District of Illinois).

According to Milton Friedman, “there is one and only one social responsibility of business – to use its resources and engage in activities designed to increase its profits so long as it stays within the rules of the game” (Desjardins 54). In other words, the only responsibility of a business is to maximize profits. This is what the Individualism theory believes in, that a business should maximize profits for the owners, so long as they remain within the law. When examining the Beam Suntory case from an Individualists perspective, the actions of Beam were unethical. While the company’s aim was to maximize their profits, they did so in a way that did not coincide with the law. Not only did they break the law by bribing multiple officials, but they also knowingly and willingly decided to implement and maintain a system of internal accounting that could’ve detected and put an end to the bribery scheme that was happening in India. The

company also kept false books and records so they could conceal the corrupt payments, among other things. An Individualist would find this to be unethical because they broke the law in order to profit more.

While Utilitarianism says that the ends always justify the means, Kantianism believes that the means are always most important no matter what the outcome is. Two of largest beliefs in Kantianism is that an action should be done because it is the right thing to do instead of doing it out of self-interest, and that nobody should ever be treated as a mere means to an end. Beam wanted to increase their profits by getting their products into the Indian markets. They bribed multiple Indian government officials and gave no thought to what might happen to those officials if they were caught taking the bribe. In this way, what Beam did was treat the officials as a way to get the licenses and registrations they needed to make a profit, meaning they were being used as a mere means to an end. The actions of Beam were also not done for the right reasons. Every decision they made was out of their own self-interest. Due to these reasons, a Kantian would view Beam’s actions as being unethical.

Virtue ethics is a theory that focuses on the character of a person or entity such as a business. This theory is based around the 4 cardinal virtues of courage, honesty, temperance, and justice. Courage is about risk taking and the willingness to stand up for the right ideas and actions. Honesty is being truthful at all times to everybody, meaning the public, employees, and the whole company. Temperance is having self-control, no matter the circumstance. Justice means following the law and using fair practices. Beam failed to demonstrate courage by bribing government officials to help them get into the Indian market. Had they followed the law and gotten the licenses and registrations needed to get into the Indian market, they would have demonstrated courage because they did everything the way they were supposed to despite it being very difficult to do. They did not show honesty when they did not tell everyone the truth to

how they were able to get what they needed to sell their products in India. They also failed to show this virtue when they lied about what funds were used for in their records and books. They did not display temperance when they decided that they were going to get into the Indian market by breaking the law and bribing people to get what they wanted. Lastly, they failed to exhibit justice when they used bribery and corruption in order to sell their product. Based off of their lack of these virtues, Beam’s actions are unethical according to Virtue Theory.

In this case, the bribery scheme used by Beam India, the falsified records and books that were used to cover up the bribes, and the choice to not implement an adequate internal accounting system were all unethical. All practices should be conducted through actions that are within the law. As soon as one company acts outside the law, that company is given an unfair advantage. As US Attorney John Lausch Jr. said, “U.S. companies that attempt to gain the upper hand in foreign business ventures by engaging in corruption must be held accountable…It is critical that our global economy remain on a fair playing field” (UPI). No company should be allowed to leave the confines of the law and without there being consequences. Everybody should be given the same chance to succeed in the global economy. By using bribes to get ahead of everyone else, Beam acted in an unethical way. The company then tried to cover up their actions, further breaking the law and becoming more distant from ethical practices.

Beam Suntory has already taken actions to fix the issues that they created. Back in 2012, when the bribery scheme was first discovered, they cooperated with the US government and took corrective action. They temporarily suspended their India operations and terminated employees who violated the company’s code of business conduct and ethics. However, they didn’t say if the 5 executives and employees referred to in court documents had been terminated (Chicago Tribune). Moving forward from there, they should terminate the 5 mentioned in the court documents and let the public know to ensure that people know that this situation was taken seriously. Then, Beam should have another external audit to ensure that there was nothing being done that was against the law. They should also implement and maintain an adequate internal accounting system that could provide assurances of the reliability of the financial reporting and the preparation of financial statements. This will help to detect any other issues like this that could happen in the future and would help put an end to it before it becomes a big issue. They should then take more actions to help detect and avoid corruption within the company, such as anticorruption training, create more anticorruption policies, and to avoid working with third parties who presented a high risk for corruption. 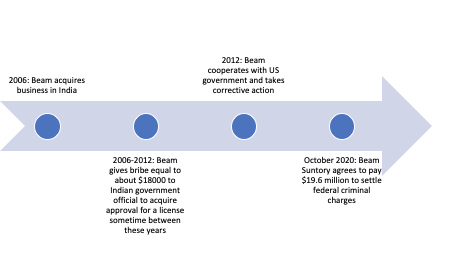