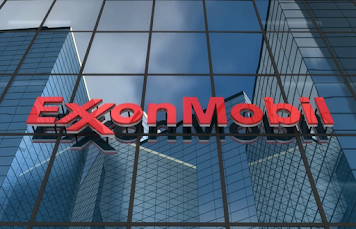 ExxonMobil is being sued by states and cities throughout the United Stated for their role in understanding climate change and what damages have happened as the result of climate change.

This paper will analyze Exxon using the different ethical theories such as, Individualism, Utilitarianism, Kantianism, and the Virtue Theory and evaluate whether it is considered ethical or not. According to Individualism, Exxon was ethically doing right by profiting as it is the sole action of a business while within the law. On the other hand, to Utilitarianism Exxon is being unethical in their actions as since it not in the publics best interest or happiness for the long term. According to Kantianism, Exxon is unethical as it did not pass the Categorical Imperative Test of the Formula of Humanity and the company used the people as a mere means in order to gain more profit than they would have if ExxonMobil did not lie. Finally, Virtue Theory would say that Exxon was unethical in their actions as they did not follow the main virtues of courage, honesty, temperance, and justice.

ExxonMobil may seem like just one factor in climate change but when you look into their history, they have known about climate change since 1957, when company scientists understood the link between fossil fuel use and rising carbon dioxide levels.

In the 1970s, a worker in Exxon’s Products Research Division, wrote “The Greenhouse Effect”. This paper clearly raises concern about consequences over human-caused emissions that may raise global temperatures. In 1979, Exxon starts research over carbon dioxide absorption in the oceans. From 1979 to 1983, Exxon would meet with other major companies to talk about climate change. They knew it was occurring and a document went out saying they would shoulder some responsibility for managing climate change.

In the 1980s, a manager within Exxon sends a primer to be shared with Exxon employees but not to be sent out to anyone else. It states the importance of lowering fossil fuels and if this is not met then there could be some serious catastrophic events.  In 1982, Exxon’s climate change research states that there would be temperature increases which would bring about changes in climate. In 1983, Exxon cuts funding for climate change research from $900,000 to $150,000, when they had a total research budget of $600 Million. In 1989, Exxon joins other fossil fuel companies to make the GCC (Global Climate Coalition). The main function of the GCC was to oppose restrictions on carbon emissions and supported “experts” who would claim that greenhouse gases are not understood well in the areas of climate change. 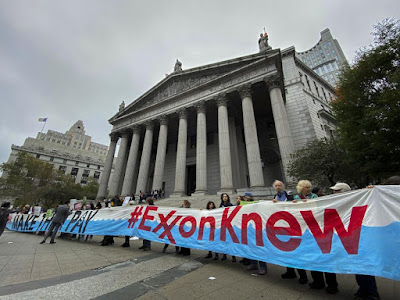 #Exxon Knew was a protest on how Exxon knew about the effect their products had on climate
change yet they did nothing.


In the 1990s, Exxon becomes a member to the ALEC (American Legislative Exchange Council). At both the state and federal levels ALEC tries to slow action on climate change. A Mobil Engineer releases a memo to the GCC, which states that climate change is real and cannot be denied any longer. In 1996, in a speech, Exxon CEO Lee Raymond denies the scientific research on climate change at Economic Club of Detroit. Exxon’s CEO goes to the 15th world Petroleum Congress in 1997 at Beijing to say that fossil fuels would not be causing climate change, even if climate change was happening. In 1998 the Oregon Petition is published by the George C Marshall Institute, funded by Exxon and Mobil to challenge climate change. Later that same year, Exxon’s shareholders request for an outside directors committee to review the work of Exxon. Exxon recommends to not do that, as climate change science is uncertain. In 1999, Exxon and Mobil merge together.

In 2002, a campaign called Stop ExxonMobil was started by Greenpeace USA. The next year, Greenpeace Global Warming Crimes Unit charges ExxonMobil with crimes against the climate. Then in 2004, Greenpeace USA creates a website to display Exxon’s role in climate deniers funding. While in 2008, Exxon claims it will stop funding climate-denying groups, they only cut some and continue to support others.

In 2015, Exxon’s first expose on how it responded to climate change comes out. Later that year, Eric Schneiderman, New York’s Attorney General, opens and investigation into whether Exxon lied or not about climate change. In that same year, Studies published that if organizations accepted funding from Exxon or similar companies, then they were more likely to argue against climate change.

In 2016, US Department of Justice involves the FBI in Exxon’s climate change history. California’s Attorney General (AG) starts an investigation into Exxon and if they broke any environmental laws. In March, AGs of Massachusetts and the US Virgin Islands start and investigation into Exxon’s climate change actions. In June, California AG, Kamala Harris, received a letter to continue to investigate Exxon from members of California’s Congressional delegation although there was pressure to stop by the House Committee on Science, Space, and Technology. In July of 2016, ExxonMobil’s denial surrounding climate change is noted by Senate democrats.

In 2019, Massachusetts AG, Maura Healey sues ExxonMobil for the use of deceptive advertising and violating the Consumer Protection Act. Both New York and Massachusetts lawsuits ruled in favor of Exxon. In 2020, multiple states and cities are suing fossil fuel companies in their role of damages in climate change.

Exxon’s stakeholders are not only their customers and employees, but they also include the government, academic institutions, and the government. Exxon is under a lot of fire, with all the information coming out about how long they have hidden and denied climate change. This effects how people will look at the brand, they need to start prioritizing their relationship with their customers over profit. Exxon’s ties to academic institutions who are more likely to deny the effects of climate change will affect those institutions that are receiving those funds. The last stakeholder would be the government, not only did Exxon fund politicians but they were also behind some government committees and groups. Their careers are affected by Exxon’s lawsuits.

From an individualist perspective, Exxon is justified maximizing their profits. Individualism is when business actions should maximize profits for the owner while within the law (Salazar 17). Exxon maximized profits to $14.3 Billion in 2019 and this is within the stakeholder’s best interest. Exxon does not need to share their information with the public as it holds no legal repercussions and does not benefit the company. However, with the recent lawsuits, it seems like Exxon could have continued to make good profits while also strengthening consumer ties by not hiding their climate change information.

Utilitarianism should aim to maximize happiness in the long run for all conscious beings that are affected by the business action (Salazar 18). When Exxon made their decision, not only did they ignore some of their employees, they also did not release climate change information that would have been helpful to all of humanity. With this information released, the public could have known sooner to take action to combat climate change and could have made smaller changes than the ones they need to do now to save the Earth from irreversible climate change. Exxon put every single future life at risk of losing their happiness.

Kantianism is to always act in ways that respect and honor individuals and their choices. Don’t lie, cheat, manipulate or harm others to get your way. Rather, use informed and rational consent from all parties (Salazar 20). Exxon needs to have goodwill which means to be honest and loyal to their customers and employees. Is Exxon’s action of deceiving the public but also ignoring their own research conducted by their scientist morally permissible? No, Exxon was lying to the public, which leads to further harm to the environment by their own hands. Their actions take away the public's rationality and freedom to make good decisions. Exxon did this to make more profit off of the ignorance of the public. It was Exxon’s responsibility to inform the public of their findings on climate change.

Virtue theory is to act so as to embody a variety of virtuous or good character traits and so as to avoid vicious or bad character traits (Salazar 22). First, Exxon was not courageous as they repeatedly funded politicians to downplay the effects of climate change. They did not stand up for what is right and instead funded the opposite view. The second virtue is honesty. Exxon lied to preserve profits, they let the public be ignorant to what problems they might face due to climate change. Temperance is moderation or self-restraint; Exxon shows no temperance for the people. Exxon is greedy and buried the truth of what fossil fuels do to contribute to climate change for almost 50 years. Even when Exxon admitted to climate change, they still funded deniers as a way to continue to profit. Exxon was not just to the public or to any of the states and cities that are suing them for having an active and knowing role in climate change.

In my opinion, Exxon could have taken multiple steps to help prevent the damages caused by climate change. ExxonMobil played a big role in downplaying the effects of climate change when they could have been one of the leaders in helping to prevent it. This would have made ExxonMobil one of the leaders in their industry. I believe ExxonMobil denied climate change so hard to keep up profits. They took advantage of the public who did not know any better and now has led the world in a direction when we soon cannot go back from.

Exxon will join in other big fossil fuel companies and agree to a governmental regulations and checkups through the whole company and who they fund.

Some marketing needs that Exxon needs are to own up to their mistakes and let the public know what they are doing to change and challenge what the company is now.

My plan will promote business profits and productivity by owning our mistakes and taking action to correct our wrong doings. Through this we are being honest with our customers and with the public. Through this we are also holding our company accountable for its past actions and even taking steps in the opposite direction by constantly improving upon ourselves.

Posted by Lauren Jablonski at 7:11 PM