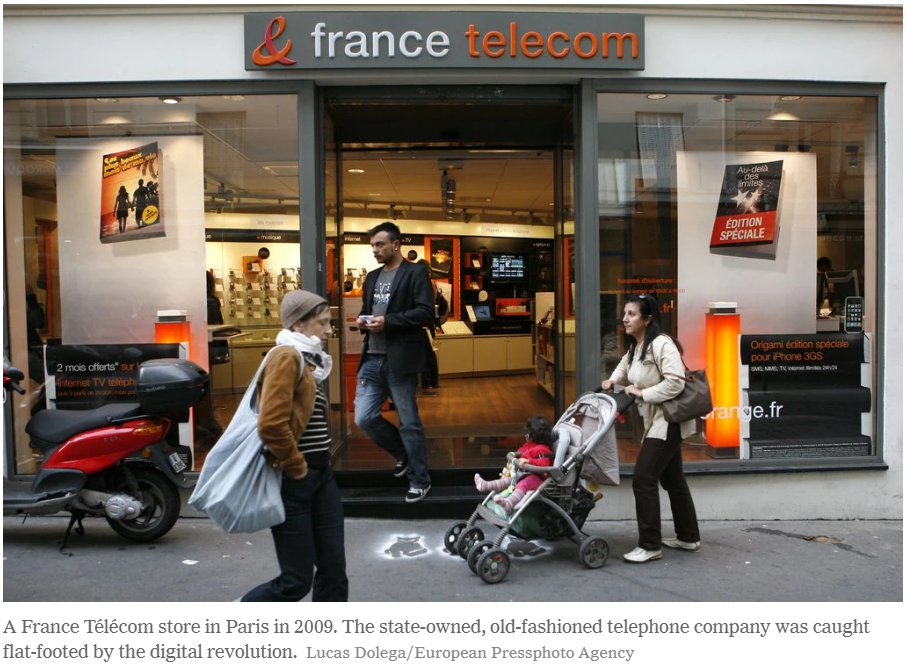 France Telecom was a state owned company until 1998. However, in the years after it privatized and shed around 40,000 jobs to become more competitive and efficient. In 2006, another major restructuring was done by then chairman and CEO, Mr. Lombard. The aim was to cut 22,000 more jobs by 2008 and retrain at least 10,000 of its more than 100,000 workers. This job cutting was not very easy in France as in France, it’s standard for employees to have an unlimited permanent work contract—contrat à durée indéterminée (CDI) in French. Under standard CDI terms, any dismissal requires a long, drawn-out process, and layoffs of more than one employee must be referred to local government officials, Ulf Schäfer and Konstantin Korotov of business school ESMT Berlin wrote in a case study. Lombard decided to take a side turn from these legal bounds and attempted to reduce staff by other morale-killing means: harassing the employees, reassigning and relocating workers again and again, sidelining unwanted employees into menial jobs, bullying workers into resignations, according to Schäfer and Korotov’s report. According to court documents, he reportedly told the senior managers in 2007: “I’ll get them out one way or another, through the window or through the door.” This resulted in an alarming pattern of suicides in the following years among the French Telecom employees. Reportedly 35 people have committed suicide so far (the number is double according to some of the employees but has not been reported till date). France was shocked by the suicides, and the government set up an emergency meeting between Labor Minister Xavier Darcos and Lombard in September 2009. In February 2010, government inspectors said France Telecom had ignored warnings from doctors about the mental health of some of its employees. Lombard stepped down as CEO of the company in March 2010 after fierce criticism. The case was filed in court where according to media reports, Lombard said: “The transformations a business has to go through aren’t pleasant, that’s just the way it is.” (Fortune). 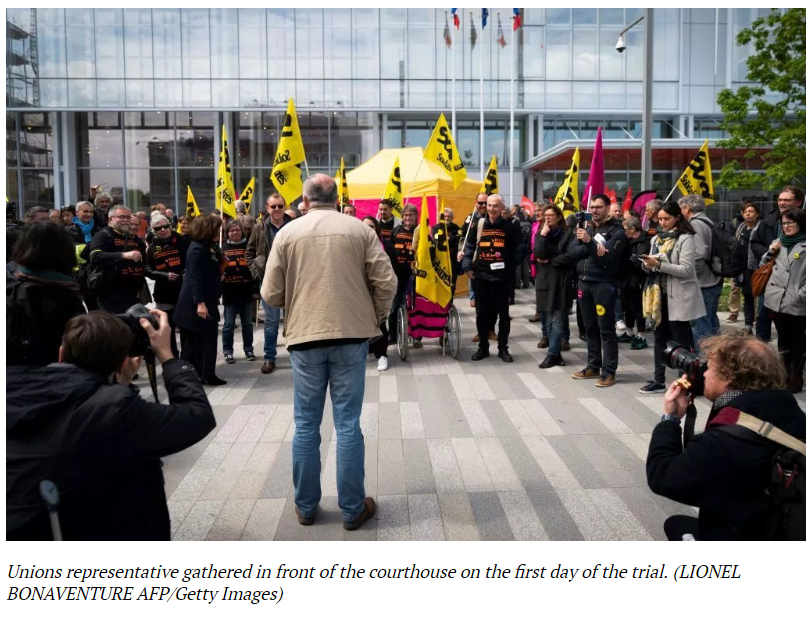 The major stakeholders in this controversy are: the former CEO and chairman Mr. Lombard, the current CEO Stephane Richard, the senior management, the former and current employees of France Telecom (now renamed to ORANGE), the families of the people who committed suicide, the French Labor Board and the French society. 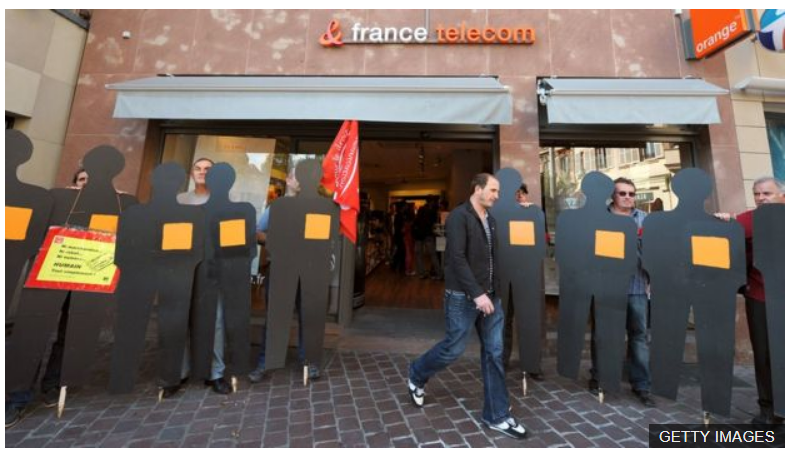 Milton Friedman created an ethical theory which is more widely accepted to be more of an economic theory and is the only one “that is specific to the business context. It is sometimes referred to as the economic model because it is based on an economic view.” (The Case Manual 18).  The theory states that: “Business actions should maximize profits for the owners of a business, but do so within the law.” (The Case Manual 17). The main aim of a business should be to provide maximum benefits to its owners and work towards business profits however, the acceptability of means of making profits is defined by the rules and laws of the society. It is thus, seen that France Telecom was staying in the bounds of law when it decided to reassign, relocate the workers, and assign them different tasks etc. However, when it started to harass the employees into resigning and deliberately caused a strain on their mental health even after warnings, then their actions became unethical according to Individualism. The business should focus on making profits without providing extra for the workers or the society but its actions should stay between the bounds of law and when France Telecom decided to mentally harass its workers, it broke the provisions of Labor Board. 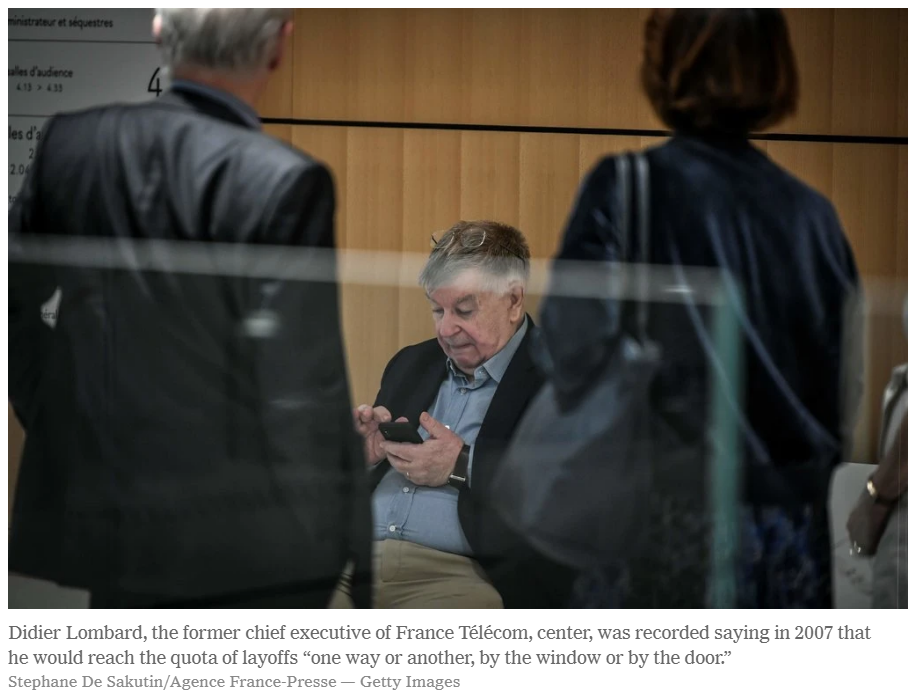 Utilitarianism is an ethical theory put forward by John Stewart Mill that states that: “Business actions should aim to maximize the happiness in the long run for all conscious beings that are affected by the business action.” (The Case Manual 19). The basic framework in Utilitarianism aims towards analyzing the costs and benefits of a reaction and then comparing to achieve that reaction which produced the most happiness for the most number of people. It is one of the few theories that employs the ‘stakeholder’ approach rather than the ‘stockholder’ approach. “To apply utilitarianism to business decisions or to evaluate business actions, compare the business action with other possible actions and determine which of the possible actions would maximize happiness in all affected parties in the long-term.” (The Case Manual 20). In this case the happiness of thousands of employees and their families was brutally sacrificed to feed the happiness of few of the upper management people. The restructuring of the company may have provided benefits to the employees if they were treated with respect in the long run. However, the current actions of the management and CEO caused utter despair so much so that the employees committed suicide in order to break free of the chains of mental corporate slavery. The action was completely unethical in the eyes of a utilitarian.

Kantianism is the rule which states: “Always act in ways that respect and honor individuals and their
choices. Don’t lie, cheat, manipulate or harm others to get your way. Rather, use informed and
rational consent from all parties” (The Case Manual 20). Kantianism is a form of “Principle-based
Ethics” introduced by Immanuel Kant in the late 18 th century. Kantianism is mainly concerned with
the intentions behind the actions no matter what the consequences. An action is considered right if
it comes from Good Will, and Good Will is the purity of intentions behind the action and is
synonymous with “having good intentions” (The Case Manual 21). It can be evaluated by asking
whether it is the right action or not and whether in willing it, you have the right motivation. The
Formulation of Humanity which states: to “Act in such a way that you treat humanity, whether in
your own person or in the person of another, always at the same time as an end and never simply as
a means” (Kant, MM 429). And this means that humans are not a means to achieve an end, rather
they should be treated as individuals who are ends in themselves. This imperative goes against the
order of merely using the humans to achieve something. The actions of the management at France
Telecom were not taken in consideration of Good Will, they were harassed and forced to do
something they did not want to do to achieve the company goal of not going through the long
process of law and taking a shortcut to getting rid of employees. This action by the management
proved that they were using the employees mainly as means to achieve their ends of profitability and
hence is against the principle of humanity. Their motivation was the opposite of having good
intentions and so was against the principle of Good Will too, therefore, making the actions as
completely unethical according to Kantian ethics.
Virtue Theory:

The Virtue Theory values “Character Traits that Promote Wellness or Flourishing of Individuals
within a Society.” And it says to “Act so as to embody a variety of virtuous or good character traits
and so as to avoid vicious or bad character traits.” (The Case Manual 22). The four virtues in
business ethics are: 1) Courage: risk-taking and willingness to take a stand for the right ideas and
actions. 2) Honesty: in agreements, hiring and treatment of employees, customers and other
companies. 3) Temperance: “reasonable expectations and desires” (Soloman 34). 4) Justice: hard
work, quality products, good ideas, fair practices. If we analyze the actions of the CEO according to
these traits, we see that he lacked courage, as he did not stand up to take the right action if he
wanted to downsize and restructure the company, he chose the easier way to manipulate employees
into resigning rather than going through the proper channel and retiring these employees. Honesty
was also missing as the employees were not told why they were being assigned menial tasks and
constantly reassigned, they were kept in the dark so that they may give up on their own. The CEO
lacked temperance and justice as well, his expectations and desires were not reasonable and he did
not perform fair practices to serve justice to his company. Therefore, lacking all 4 basic virtues, his
actions were unethical in the light of virtue ethics.
Ethical Evaluation:

After looking at the case from the angles of four different theories, all of which admonish the
actions of CEO, Lombard to be highly unethical in nature, we can conclude that he was acting
extremely selfishly in the pursuit of achieving new heights of the company. His actions ended up in
immense losses of lives of the innocent along with causing bad publicity to the business, hence
costing it its profit.
Written by: R. Aloufi
*The suicides started in 2008 and spread across 2009.