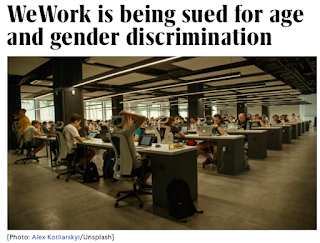 When both, Lisa and Richard, were fired there was really no good reasoning behind it; hence the lawsuit. In this instance WeWork portrays a very unethical way of treating their employees. It seems as if this company does not care about there staff and is only worried about making profit. As a company you want to make sure your employees have a sense of security when it comes to their career, instead WeWork made it very clear that anyone, executive or not, can be easily replaced at any time.


Governments have a responsibly to encourage, through such things as fiscal and monetary policy and tax incentives, private sector employment for all citizens. In this restricted sense, it can be reasonable to claim that people have a right to work. (DesJardins 126) WeWork violated this right to work when they fired Richard Markel and Lisa Bridges from their company. This interpretation holds that the right to work is not a right to a job, but the right, once hired, to hold that job with some degree of security. Once one has a job, this would be the right to keep that job or, in other terms, the right to not be fired without just and sufficient cause. (DesJardins 126) The way that WeWork went about terminating these two executives was not justified. Markel’s position was already given to a newly hired employee before they even fired him and Bridges was fired after bringing the issue of, gender discrimination within the WeWork company, to light. Individuals may not have a right to a job, but they do posses ethical rights that protect them from being mistreated once they do have a job. (DesJardins 126) Note that this does not claim companies have an obligation to provide work, only that it has an obligation to its employees— that is, those already working— to structure a workplace in ways that protect their rights. (DesJardins
127)

Stakeholders
WeWork Cos Inc. would be the main stakeholder involved in this lawsuit. The employees are also stakeholders because whether it be that WeWorks actions are deemed ethical or not they still have to be worry about the companies past actions and how they’ve treated their employees before. Customers depending on their believes are also stakeholders because if they don’t agree with WeWorks ethical decisions, they may have to find a new company to do the same thing.

Individualism
Individualist believe that business actions should be maximize profits for the owners of a business but do so within law. (Salazar 17) I believe that based on the actions of WeWork, they were doing there best to maximize profits but I don’t believe they did so within law. WeWork broke the law when they did not respect Richard or Lisa’s right to work. The right to work is the right to hold a job with some type of job security once hired. Neither of these executives had job security because the company proved that anybody can be easily replaced . If WeWork could have provided a just and sufficient cause for the termination of these two individuals it would’ve been deemed ethical according to individualism.

Utilitarianism
The ethical rule of Utilitarianism is, business actions should aim to maximize the happiness in the long run for all conscious beings that are affected by the business actions. (Salazar 19) Lisa and Richard’s happiness definitely was not the main priority to WeWork. The company made Richard move all the way across the country to San Fransisco, hired someone with the same title as him, then fired him within a year of working there with no justification as to why besides the fact that “his role was eliminated”. Obviously, Mr. Markel was angry with the actions of WeWork and that is the reasoning he is suing them. Lisa was fired for bringing age discrimination within the company, to light. This women saw that the company was paying males much more just because they were men. For a women, I bet this is definitely upsetting and degrading because you’re basically being told you aren’t worth as much as man just because you are a women. WeWork did not care about the happiness of these executives at all and because of this, these individuals have grown angry and decided to sue. If the company approached these situations with some ethical value, Richard could’ve been forewarned about his unemployment or just moved to a different position within the company so that he wasn’t without a job, and Lisa would’ve been getting paid the same amount as a man would.

Kantianism
The believe of a Kantian is to always act in ways that respect and honor individuals and their choices. Don’t lie, cheat, manipulate or harm others to get your way. Rather, use informed and rational consent. (Salazar 20) Based on the actions of WeWork a Kantian would say that this company is unethical. In Lisa’s situation, WeWork tried to manipulate her by paying her less than what a male gets paid. Also, when she brought it to co-president, Jennifer Berrent, she insisted that the unequal pay made sense because men take risk and women don’t. (Brown) Even one of the presidents of the company tried to convince Lisa that their decision was ethical when it blatantly was not. Richard was manipulated as well, the company asked him to move across the country for their own benefit and then fired him less than a year into his job. They used Richard for their own good without any concern for him as an individual. In no shape or form would WeWork be considered an ethical company based of the ethical rule of Kantianism.

Virtue Theory
The ethical rule for the virtue theory is to act so to embody a variety of virtuous or good character traits so as to avoid vicious or bad character traits. WeWork does not posses any good traits based off of this case. They are a very unethical company with little to no morals. There employees are not treated with the simple respect of a human. In Richards case, the company shows a very shady side. I thought it was very suspicious for them to hire someone with the same title but then tell Mikel that his position was eliminated. How can it be eliminated if you just gave someone the same title and why was that person not let go as well if the position was eliminated? For Lisa’s case the company showed that they are support sexism which isn’t a good quality to possess. She found multiple examples of men getting paid at a higher wage and when she brought it to the attention of WeWork they put her on leave and moved to terminate her. (Brown) This motion against Lisa proved that they knew they were in the wrong and just didn’t want everyone else to know. In both instances, WeWork proves again and again that they do not posses good characteristics when it comes to how they treat their employees. Based off the virtue theory this company would be deemed unethical. 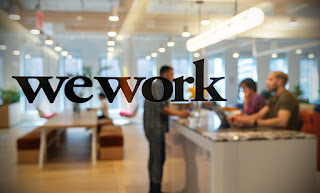 WeWork Cos Inc. mission statement for their employees says, “Our mission doesn’t end with the small businesses and entrepreneurs that call us home. We believe in empowering our team to create their own life's work. We move fast and we challenge each other, but we look after each other and care about our culture, which makes working here extremely rewarding. There's a lot of work left for us to do, and we couldn't do it without a single member of our team.” (WeWork) Based on the two law suits still pending, involving Mr. Mikel and Ms. Bridges, it is quite clear that this is an inaccurate statement. When it comes to Richard, the company did not look after him nor did they show that care about their culture. If they did care about their culture they wouldn’t have hindered their reputation by making unethical decisions involving their employees. Also, they claim that they couldn’t succeed without a single member of there team but they fired Mr. Mikel without any hesitation. With Lisa, I believe the company looked at her as a threat because of what she could do when she found out there was many cases of sexism going on within the company; so that is why she was fired. Once again, the company did not look after Lisa, they knew that there were men being paid more than women for doing the same job which is completely unfair to them and they didn’t do anything about it. Once it was brought up that WeWork was discriminating against women I am sure that a lot of people did not want to associate with a business like that. So with that being said, in this instance, WeWork obviously doesn’t care too much about their culture or else they wouldn’t have taken the risk of looking like a sexist company.