Based on paper by Paul Boccia 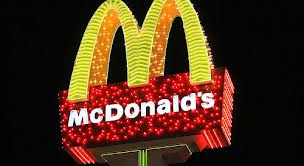 McDonald's is a major superpower in the fast food industry, serving around 68 million customers daily. They operate 33,510 restaurants in 119 countries and employ more than 1.7 million people. The company was bought in 1955 which began the start of the worldwide growth and universally known "golden arches."McDonald's owns 27,075 franchised restaurants and 6,435 company owned and managed restaurants. The McDonald's company had a gross revenue of about $27.01 billion and a gross profit of $10.69 billion in 2011. McDonald's is currently #7 on the Forbes most powerful brands list. 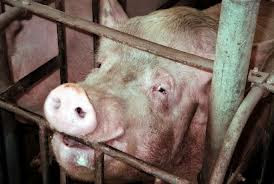 In the year 2010, in an undercover operation, the pork supplier for the McDonald's Company, a subsidiary of Smithfield Foods called Murphy-Brown, was discovered to have been using many terrible farming practices. These practices included using tightly confined gestation crates for the pigs which resulted in many injuries to the pigs such as pressure sores to ulcers, due to this the pigs would bite the bars of the crates leading to blood on the crate bars which is an indication of their poor living condition. Other terrible practices included using unsterilized razors, and "jabbing" the pigs neck and back area with a rod to force them to move. There were no veterinarians present at this facility which lead to employees being able to mishandle the pigs. According to Friedman's theory of Individualism, the only obligation that the business has is to maximize profit for the owner and stockholders. A study was done by Iowa State University which found that the use of gestation crates increase production costs by eleven percent, which if accurate means that this case would be seen as unethical from an individualists perspective, but there is no evidence that this is accurate. Gestation crates are a way to reduce space and spend less money on containing the animals allowing McDonald's to also spend less money which in turn maximizes profit. With the assumption that the study by Iowa State University is false, this case is considered ethical by individualists. Utilitarianism is that happiness is the only thing that is good in itself and that it should be maximized within you and in others. Obviously in this case happiness is not maximized, the pigs are living beings and they are treated horribly, McDonald's is doing business with a farm that is cruel to animals and this is not appealing to the consumer's eye. Neither of these businesses are maximizing happiness therefore this case would be viewed as unethical by utilitarians. Kantianism bases its perspective on people's ability to act rationally and their motivations for their actions. It is very clear in this case that neither McDonald's nor Smithfield has not acted rationally. Their motivations for this action is to maximize profit by spending less on the animals which allows them to sell their product for a lower price. This means that McDonald's has lied to their customers in order to keep them returning for more and because of this, their actions are unethical by Kant. The virtue theory focuses on the character of a person or company, and it follows four main virtues that companies should possess. These virtues are honesty, courage, justice, and temperance. McDonald's did not show that they have any of these virtues. They are not honest with their customers about where their products are coming from, they don't tell the customers about the conditions of the facility holding the materials for their food which is dishonest. McDonald's has not shown courage either because they are not willing to "take a stand for the right ideas and actions" which would be to act against Smithfield for animal cruelty and terrible living conditions. Justice is not a virtue possessed by McDonald's in this case either because there needs to be a "quality product"produced, and producing meat from animals that have been living in terrible conditions and the use of unsterilized razors, that is not accomplished. The last virtue is temperance which has also not been followed, it's defined as "reasonable expectations and desires" (Soloman), the customers would likely expect the meat is produced in a respectable manner, which is clearly not demonstrated. The lack of these virtues proves that this case is unethical in the virtue theory.


These facts are based on the original research paper by Paul Boccia, "McDonald's Pork Supplier Mistreats the Pigs they Raise"