Based on a paper by Taylor Searles
Summary By Maureen Nelis

In 2009 Nike made the decision to close two factories in Honduras leaving 1,800 Honduran employees out of work and without legally mandated severance pay. When this injustice was brought to the attention of The Fair Labor Standards Act (FLA) the organization sat back and did absolutely nothing, once again proving that Nike’s position on the FLA’s Board of Directors prevents them from taking any real action in support of workers’ rights. It seemed like once again the Nike Corporation would be guilty of an injustice of human rights after facing political and ethical scrutiny over violation of child labor laws in China a few years earlier. Student Union groups around the U.S. spoke out against Nike’s repeated offense and the FLA’s failure to protect the Honduran worker’s rights. Francisco Lopez, a panelist on the Workers Rights’ Board and executive director of the immigrants’ rights group CAUSA Oregon, compared Nike to the United Fruit Company, which notoriously exploited Central American workers in the 1950's. “It’s the same story, not bananas, but apparel,” said Lopez, a Salvadoran immigrant. A campaign titled “Just Pay It” grabbed media attention and made Nike face their choice head on. After 17 months the Corporation announced that Nike would pay back $1.54 million in severance, a year’s worth of healthcare through the Honduran social security system, paid job training, and give priority rehiring to the laid-off workers at its other supplier plants in Honduras. Nike violated the four ethical theories due to this decision to lay of workers in order to profit from not paying these workers severance. This decision disagrees with the Individualism, Kantian, Utilitarian, and Virtue theories as the workers were illegally denied severance pay after they were unjustly fired by the Nike factory where they worked. 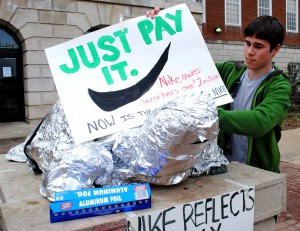 According to the Individualism theory, everyone has the right to pursue his or her own interests and no one has a right to make other people’s choices about their pursuits for them. The goal of Individualism is to profit within the constrains of the law. Therefore, in order for Nike to abide by this theory, the company would have to respect the workers’ rights to pursue their choices so they can live in the way they choose, to profit, and to do so legally.  Accordingly, Nike has neglected to consider this ethical theory of individualism and when they decided to lay off so many workers without proper severance pay, the company failed to consider their stakeholders as obligations to those who are affected by their poor business decision. An individualist that takes reference from Milton Freedman would say that the business’s primary goal is to make money within in confines of the law. Nike acted on this decision for the purpose of earning a profit but failed to do so while obeying the law. The Fair Labor Standards Act (FLA) requires that an employer pay an employee whose employment has been terminated their regular wages through their completion date and for any time that the employee has accrued severance pay. 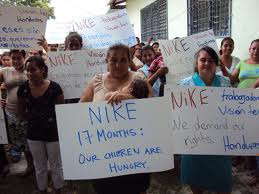 The Utilitarian ethical theory according to John Stuart Mill states that we should bring happiness to ourselves as well as to others. The reason behind this theory is that if happiness in valuable, there is no difference morally-speaking between your happiness and someone else’s happiness. Nike’s decision to lay off workers without pay clearly puts them in violation of this ethical theory and would be considered an unethical choice. The workers and their families suffered because of this unethical decision and the benefit the company saw is not enough of a reason to classify this as an ethical, utilitarian choice.
According to Kant, Nike would have also violated the basic principles of Kantianism. By initially denying the Honduran workers their due severance the corporation acted inconsistently and irrationally and more importantly, their actions went against the “rules”,  in this case the law. Nike failed to respect the Honduran workers and their autonomy, individual needs, and differences. Nike was not in any way motivated by good will and they knew their actions were wrong whereas Kantian ethics are motivated to do what is right because it is right. Finally Nike went against all four of the main virtues of character according to the virtue ethical theory. The decision Nike made was not honest or just, and did not take courage or self-control of business in order to make this decision. The Honduran workers were under the impression that even if they were fired they would rightfully receive severance pay to support their families. In this way the decision Nike made to deny the workers this severance was dishonest and unjust. Nike clearly did not consider how this type of poor ethical decision would further tarnish their image in the business world. The corporation made this decision on the assumption that the Honduran workers would not fight back, therefor Nike showed lack of courage and integrity of business. Due to the efforts of these social rights groups and the persistence of the Honduran people, Nike did eventually agree to pay their severance, but the overall effect that this business decision has left on the 1,800 workers was substantial and undeniably unethical.

These facts and analyses are based on an original research paper by Taylor Searles, "Nike, Just Pay It" (2012).