The Home Depot: Too Many Bribes for One Company (July 2007)

The Home Depot is the largest home improvement retailer in America, it is a mutli-billion dollar company. They provide a vast majority of home improvement and construction products and services. The company was founded by two people, Bernie Marcus and Arthur Blank, with what they call their “special vision”, “to create a company that would keep alive the values that were important to us. Values like respect among all people, excellent customer service and giving back to communities and society." So right from the start of the company, it was all about the values that were important to them. However, like many companies today, there always seems to be a few bad apples that can ruin the bunch
One case in particular showed this very well and that happened in July 2007. The case involved four purchasing managers who were terminated because they were caught accepting bribes from multiple Asian suppliers in exchange for putting their products on Home Depot's shelves; their names were not publicly released. The FBI was involved with this case and after investigation, released four names of people: Anthony Tesvich, Melissa Tesvich (Anthony's wife) , James P. Robinson and Ronald K. Jonston. It was believe that Robinson and Jonston were taking payments from Tesvich and the companies that Tesvich started. The companies that he started were domestic representations of the foreign suppliers he was getting bribes from. So in return for allowing foreign suppliers to sell their products at Home Depot's stores, Tesvich accepted millions of dollars in bribes. Tesvich resigned in 2005 after he was questioned about evidence that he had been accepting kickbacks from one of the foreign suppliers in Taiwan.

In the United States, there is a law called the Foreign Corrupt Act that directly plays a role in this case.  The law states that it is illegal for a US person, entity, and certain applicable foreign entity to make or accept bribes or offer any inducement for the purpose of obtaining or retaining business with a U.S firm.  Penalties for breaking the Act include a large fine and possible jail time.  As a result from the Act and other laws, Robinson was sentenced in April to 5 years and 3 months in prison for the role in the scheme that he took part in.  Johnston was sentenced to 3 years and 10 months.  Melissa Tesvich, who mainly acted as the bookkeeper for Anthony Tesvich, was sentenced for 3 years for filling false tax returns.  Anthony Tesvich was sentenced serve six years and six months in jail and then three years of a supervised release.  He was also ordered to pay about $8.3 million in restitution and to forfeit all the assets he obtained from the scheme.

The actions of the four purchasing managers is not ethical by any of the ethical theories. Under the Individualism theory, the main goal is to make money for the company and stock holders in a legal way. Even without looking further into this theory, it is clear that this case is not ethical, accepting bribes is not legal according to the law. Also, the four managers were only interested in increasing their profits and not profits of the company which is another clear violation of this theory.
The Utilitarianism theory is about maximizing pleasure and happiness for everybody. By the fact that the foreign suppliers had to give bribes to the purchasing managers, fails this theory. It would have maximized happiness if Home Depot rejected the bribes and sold their products in the store anyway. Or it also would have maximized happiness if Home Depot and the foreign supplies made a fair business agreement which would have maximized happiness on both sides. But the managers were greedy and was happy to accept any bribes the foreign supplies were to give them and that is why it is unethical under this theory.  Also this affects the stakeholders, the customers, employees, stockholders, and upper management.  Maybe the reason why the foreign suppliers had to give bribes in the first place was because their products were not up to the US standards and were dangerous.  This could greatly have effected the customers, caused lawsuits and harm the reputation that Home Depot has.  This would definitely not have maximized happiness. 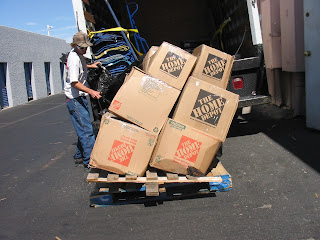 The Kantian theory is about doing the right thing and that individuals should be motivated by good will and do what is right because it is the right thing to do. Another part of the Kantian theory is the Formula of Humanity.  That helps to describe the Law of Rationality which says, "Act in such a way that you treat humanity, whether in your person or in the person of another, always as the same time as an end and never simply as a mean."  The managers accepted the bribes based on their own needs. They were not motivated to do the right thing at all and did not do what was right. If they were motivated to do what is right, then they would have strived to make an honest business agreement with the foreign suppliers instead of accept the bribes. The Home Depot was making the companies that sell their products happy but they were doing it for the wrong reasons.  Based off of that, this case is not ethical.
The virtue theory has four main parts that need to be followed in order for it to be ethical, those are : courage, honesty, self-control, and justice. The managers did not meeting all of these characteristics. The only one that can be argued that they did was courage. That had to have a lot of courage to go out and break the law like they did, knowing that they would be caught at any time. They did not have self-control because they kept on receiving bribes and constantly chose to break the law. They were not honest at all, the were lying to Home Depot and to the customers who eventually bought the products. They made it seem like they were making legitimate business deals with many companies but when in fact they were deceiving many people. They also did not meet the justice characteristic, again they were accepting bribes which is illegal and their actions were clearly unjust.

These facts are based on the paper “Home Depot Ethical Controversy” written by Mitch Rushton and Mike Cialdea.