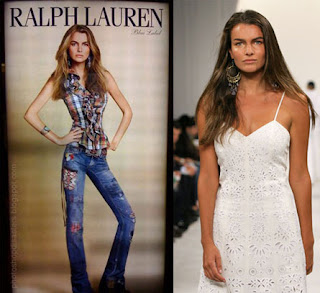 Founded in the late 1960’s Polo Ralph Lauren is one of the world’s top design companies. Ralph Lauren began to expand in the 1980’s with the mission statement to “redefine American style, provide quality products, create worlds and invite people to take part in their dreams (Mission 1). In the year 2008 Ralph Lauren appeared to be successfully implementing their mission with an income of $5,018 million. However that following year their income plummeted to a mere $4,978 million when news was released that the well know company had fired Ralph Lauren model Lauren Filippa Hamilton for being “overweight” and accused of not being able to fit into their clothing. The scandal only became worse when they decided to extensively alter the photos of her modeling their clothing causing her look deformed. Hamilton’s head was bigger than her hips.
Through the poor choices of the company several stakeholders were affected. These stakeholders include the investors, the models including Hamilton, the company as a whole, and the consumers. The expectations of the consumers were that they wanted a company that invited their consumers to take part in their dreams. If the company was calling their models overweight, than did Ralph Lauren think that their consumers were overweight as well, even if they were already thin. The image Ralph Lauren created was very disturbing to their consumers and unfortunately the expectations of the companies dreams were twisted into something negative. The failure for the company to implement their mission statement caused consumers to boycott the company resulting in a deficit in Ralph Lauren's income.
In this case Ralph Lauren's actions were unethical in all four of the theories presented in Business Ethics. Under the theory of Individualism the only goal of business is to make a profit. Ralph Lauren was indeed making profit bringing in $5,018 million in income. However after consumers viewed the disturbing photos of Hamilton, their income plummeted to $4,978 million. This drastic decrease affected several of their steak holders. These steak holders included the company as a whole, and the investors. The company also affected several other steak holders. The consumers and Hamilton were affected by Ralph Lauren who gave them the insecure feeling that Ralph Lauren believed they were overweight even if they were naturally thin. An individualist would have to agree that Ralph Lauren was acting unethically. 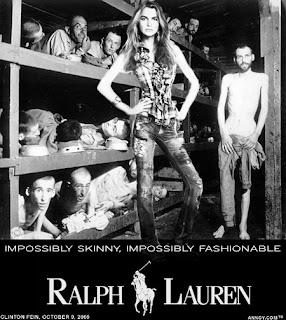 A person who follows the theory of Utilitarianism, which is concerned with making their customers happy, would say that Ralph Lauren failed to accomplish this. Their consumers and Hamilton were both left unhappy. Hamilton was led under the pretense that she was "overweight" and a consumer could say that through the disturbing advertisement the company was making their consumers feel as if they believed they were overweight too. The company did not act with the consumers happiness in mind.
In the Kantianism theory the idea of thinking before acting is shown through four steps, these steps include making rational decisions, allowing others to make rational decisions, respect of people when it comes to making decisions, and lastly be motivated by goodwill. Clearly the decision making of Ralph Lauren to alter photos was not a rational decision nor were they thinking of the good will of the consumers when they advertised their clothing on an edited unrealistic looking model, making consumers believe that’s how they should look in reality. Making their decisions unethical. In the eyes of someone who believes in Virtue Theory, what is good is not based on if it makes the consumers happy but whether or not it functions properly. Virtues are traits that aid in making people happy; vices are the opposite of virtues and represent selfishness and dishonesty. Ralph Lauren represented  dishonesty when they photo chopped a photo making it look disturbing to the eye, sending out negative vibes to consumers that Ralph Lauren thought they were over weight too. Since Virtue Theory is based on whether or not a product functions properly one can say that Ralph Lauren was not functioning properly by sending out the message to the consumers that if your thin, you might still be too large to fit into their products.

Note: These facts and analyses are based on an original research paper by Ashley Lauricella, "Polo Ralph Lauren, Photo Shopping Scandal" (2012).