Controversy
Best Buy, a company known for its technology driven products and well known array of products, is one of the major retail companies this country has to offer. Best Buy sells electronics and a variety of related merchandise, including software, video games, music, VHS cassettes and VCRs, mobile phones, digital cameras, car stereos and video cameras, in addition to home appliances. Unlike every company, Best Buy has run into some harsh criticism for their unethical practices in the past. In 2000, two Florida consumers brought a lawsuit against the company, alleging that it engaged in fraudulent business practices related to the sale of extended warranties. The suit claimed that store employees had misrepresented the manufacturer's warranty in order to sell its own Product. In addition, during 2007 an investigation into the company's use of an in-store website alleged to have misled customers on item sales prices. The investigation learned that some customers claimed they thought they were surfing the Internet version of bestbuy.com at an in-store kiosk only to learn that the site reflected in-store prices only. It is not recently that Best Buy is back in the spotlight once again for its recent price gouging scandal that occurred in Houston Texas during the devastating Hurricane Harvey. A Best Buy store, located in the Houston suburb of Cypress, was accused of price gouging when a viral tweet went up displaying a case of Dasani water selling for $42 and a case of smart water for $29. To compare, a case of Smart water usually costs between $15-$25, even when found online. Best Buy received a wave of backlash and criticism for this occurrence in the form of many emails and complaints.

Stakeholders
As a result of the clear price gouging done by Hurricane Harvey, there was a clear stakeholder in this unethical occurrence. To begin, it’s obvious that anyone who remotely lived near Houston and especially Cypress residents was affected by this pricing. Hurricane Harvey was one of the most devastating hurricanes this country has seen, which can be implied that there were many residents that were in dire need of supplies (such as water). They probably couldn’t have afforded to purchase these cases of water because of the massive price increase done by Best Buy. To put the disaster in perspective, there have been 77 confirmed fatalities that can be attributed to the devastation that Hurricane Harvey caused. The massive amounts of sea water that came with the Hurricane trashed the previous supplies of fresh water that were available in the lakes surrounding Houston area. Another stakeholder in the unethical scandal was the Best Buy employees themselves and top Best Buy executives. The employees were probably fired consequently for the mistake that they made during the hurricane. Reports indicate that employees were told to price the water on their own with instructions from store managers which led to the mass confusion. In addition, top executives faced immediate backlash along with a lot of negative press that accused them of price gouging. In return, Best Buy’s reputation definitely took a hit and potentially may have lost loyal customers because of this viral photo.

Individualism
Individualism is the economic theory that states that the main goal of business is to increase profits, while keeping actions within the scope of the law. If we were to take an Individualism standpoint when looking at Best Buys actions, we can determine that Best Buy was acting completely ethical when determining the price of the waters according to the theory. Best Buy’s clear intent of trying to increase profits holds true and they did so while acting within the guidelines of the law. Although price gouging is highly scrutinized, there are no laws outlawing this form of business practice from happening. They are only guidelines and restrictions as to what a business may and may not do in terms of gouging. Violators will consequently only be fined. So as a result, Best Buy acted ethical and satisfied all the needs in regard to the Individualistic theory.

Utilitarianism
The focus of Utilitarianism is to maximize the overall good of a situation. Utilitarianism defines an act as ethical if the actions in question produced an outcome that can be perceived as good (Desjardins 2014) To be more specific, Utilitarianism is a theory which aim of action should be the largest possible balance of pleasure over pain or the greatest happiness of the greatest number. In the Best Buy case, we can clearly conclude that Best Buy did not act in the overall good of the situation. Hurricane Harvey was causing massive destructions throughout the state and Best Buy tried to take advantage of that by exploiting people’s extreme needs for supplies. The only pople who could have taken pleasure over this situation was the Best Buy store itself. They were turning in massive profits because of the exploitation of their customer's needs. Customers were probably forced to purchase these overpriced waters because they were in dire need of them. They were in a life or death situation which obviously is a painful state. Customers who needed to buy these cases were clearly getting scammed because of the insane prices. Best Buy also received viral backlash for the gouging in the forms of social media backlash, complaints and emails, etc. so we can confirm that the action was perceived as unethical based upon the Utilitarianism viewpoint. 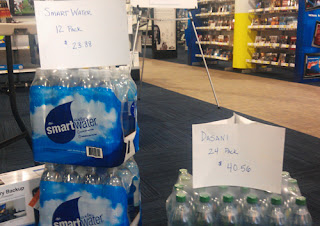 Kantianism is an ethical theory that says companies must be respectful of others when making a decision. Hence, if an action is perceived as damaging to another party, it will then be declared unethical, even if the outcome is good. In terms of Best Buy’s example, we can also declare that they acted unethical in the eyes of a Kantianism viewpoint. It is clear that Best Buy was trying to take advantage of customers emergency needs in the form of price gouging. Best Buy evidently damaged another party because they were trying to take advantage of a natural disaster. If there was any water sold in any other establishment, customers wouldve immediately noticed that Best Buy's prices were insanely ridiculous. If consumers had no other option to purchase water somewhere else, they were essentially forced to purchase these waters because of their dire situations, which goes against all principles of Kantianism.

Virtue Theory
Virtue Theory is the ideals that focuses on specific character traits and values to determine an ethical situation. In this situation, the company is displaying greed, and uncaring, both of these characteristics are perceived as negative character traits. The company was trying to exploit customer’s pockets while they were in a time of need. When the store chose to exhibit these extremely inflated prices, they clearly showed these traits in the process. They deceived the customers and sensibly forced them to purchase their product because they probably had no other option. By acting on such traits, Best Buy and their employees are being unethical under Virtue Theory because they are acting under negative character traits.

Green, Dennis. “Best Buy Explains Why It Charged $42 for a Case of Water in Texas during the Hurricane in 'a Big Mistake'.” Business Insider, Business Insider, 29 Aug. 2017, www.businessinsider.com/best-buy-water-hurricane-harvey-2017-8.