Controversy:
JBS S.A is a Brazilian company that is the largest meat processing company in the world, producing factory processed beef, chicken, and pork and also selling by products from the processing of these meats. But their headquarters in brazil are now under investigation due to some allegations that has the countries stomach turning. Two billionaire brothers JBS CEO Wesley Batista and his younger brother Joesley Batista, the ex chairman of the worlds largest meat processing company are involved in a corruption scandal which seems to involve Brazilian President Michel Temer.
The Batista brothers and JBS S.A are being accused of food safety violations. By violating these food safety precautions they were accused of an alleged bribery scheme including several beef companies including BRF, and government inspectors who allowed companies to ship out beef that was past its sell date. Investigators have also found the company was allegedly repackaging soiled or contaminated meat using additives to mask the smell and passing the beef off as inspected, safe to eat meat. In other cases potato, water and even cardboard paper was mixed with chicken meat to increase profits.
The two brothers have entered a plea bargain which the confessed they spent 600m to bribe nearly 1,900 politicians in recent years. By this deal it would give them the immunity from prosecution in the graft probe but, there was something leaked that wasn't supposed to make it out. Joesely Batista and his team were supposed to provide evidence to prosecutors but sent them a tape that leaked evidence that he was hiding from the prosecutors. There was an audio tape of a conversation between Joesley and Mr. Temer discussing hush money payments to silence politician Eduardo Cunha.

The stakeholders that were affected by this were many people around that world that purchased this companies products.. Countries around the world including the U.S has to close of imports of Brazilian beef. By closing off their imports from JBS one of the worlds largest meat distributors they have to go and get their meat from somewhere else. Some of this tainted meat was sold for school meats or to retail chains including Wal-Mart. From eating this contaminated meat people might experience food poisoning, nausea, vomiting, diarrhea, which are often accompanied by stomach cramps, high temperatures and chills. Ranchers are also affected by this scandal as well. Due to the fact that JBS and ranchers have been at odds, JBS has decided to stop buying cattle for cash while ranchers are against to sell on credit. As JBS is their only buyer this is leaving the ranchers worried as now they will have all this cattle and not have anyone to sell it too.

Individualism:
The individualist theory states a business is acting within ethical standards when it makes a profit for its stockholders or focuses on their interests, but doing so while pertaining to the laws of society and respecting human rights. Its known that since JBS is known as the largest meat distributors they didn't just get their overnight. They have had success growing to be the biggest meat distributors. As they were exporting their products to all of their partners they continued to have the largest profit in the industry. But during this scandal they were earning a profit by going against the individualist theory. They were maximizing their profits by going against the law and human rights. The people that were buying the meat from JBS they had no idea that the meat they were being sold was contaminated die to the fact the meat was labeled as safe to eat. But once the news got out about the corruption going on inside the company JBS took a huge hit backfiring on them. Once the news came out the industry went into a frenzy. JBS net profit dropped 79.8 percent and reported a profit of $97.1 million from the same period last year. 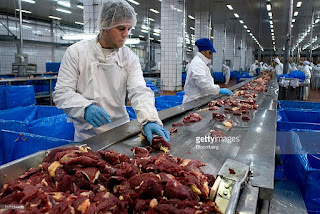 According to Utilitarianism, an action is considered ethical if it promotes all around happiness to all parties affected. The stakeholders in this situation did not achieve happiness due to the fact they were being sold contaminated meat. Even though the company was making money before they were being investigated on corrupted distribution in the end they weren't so happy either. JBS was also affected by the scandal they created by partners closing their ports from receiving meat from JBS. The stakeholders who actually consumed the  meat didn't achieve happiness as they had to worry about whether the meat they had in their households were contaminated or not. This would lead to people losing money as they had to throw away all their meat and buy more. This also lead to costumers losing trust in the company. They are always going to have it in their head worrying whether the meat is safe to eat.
Kantianism:

Kantianism is based on the values that ethical activity is only possible when the acting party conducts them self rationally in society. A business entity should never consider itself exempt from these rules. People, their autonomy, and their individual needs and interests must be respected in order for any activity to be carried our or to even be considered ethical by a Kantian. The company was encouraged to distribute contaminated meat even though the CEO of the company and the President of Brazil knew there was something wrong with the meat and they were covering it up. In this case they did not respect the autonomy of the people and their individual needs as the customers had no idea there was anything wrong with the meat. JBS was covering up the contaminated meat by paying off politicians to let the meat pass its safety precautions and be allowed to be distributed. By this the company was falsely distributed its products by saying is was safe to eat meat but in reality it wasn't. By knowing what was wrong with the meat they should've stopped distribution addressed the issue to public and inform them why there will be a stoppage in distribution. By them doing this it will give the stakeholders knowledge of the situation giving them the decision whether they want to continue and take the chance of buying the meat or wait till the problem is solved.

The Virtue Theory is based off of four characteristics. If a company follows these four characteristics they are considered to be acting ethically. These four characteristics are courage, honesty, temperance and justice. The courage characteristic represents the willingness to take chances. The honesty characteristic represents how truthful a company will be to the public and other parties that are involved. Temperance represents the company’s ability to set realistic expectations. Justice represents hard work and fair practice. In this case JBS did not contain any of these virtue characteristics. The CEO and President did not show any courage as they tried to hide the problem from the public by paying people off to cover it up. If they had courage they would've addressed the issue right away and tried to fix it and inform the public oh what is going on. There was no honesty until they finally were caught and were admitting they knew what was going on. JBS was putting a lot of people’s health at risk by distributing contaminated meat and not telling anyone about it. There could've been some really bad consequences as many people may have or could've got sick from the meat. If they were to show temperance they would've taken charge and stopped all distribution of meat and accepted the fact that maybe they received a bad batch. Instead of just distributing the bad meat anyway causing a frenzy to the public. JBS did not show any justice from their actions. As by them distributing contaminated meat its not fair to public especially hiding the fact that its contaminated and saying that it is safe to eat.

Posted by Carmine Totillo at 8:28 PM