Lending Club, "the world's largest online marketplace connecting borrowers and lenders".  Lending Club employs the use of technology to challenge the marketplace by enabling lower cost borrowing programs.  Borrowers using Lending Club can take advantage of consolidating debt and paying off high interest credit cards with an average of 24 percent lower rates than traditional loans.  This type of innovation in online market share uses a revolving leverage in economy by providing borrowers with savings and investors with solid returns.  "Lending Club is America's largest marketplace connecting borrowers and investors, where consumers and small business owners lower the cost of their credit and enjoy a better experience than traditional bank lending, and investors earn attractive risk-adjusted returns". 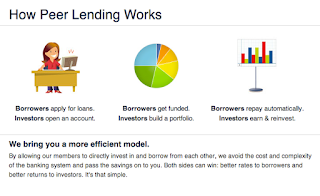 Renaud Laplanche fell under scrutiny by the board as CEO of Lending Club in the spring of 2016 when it was discovered that he was using the organization to benefit himself financially.  A formal investigation revealed that Laplanche influenced Lending Club to invest $10 million in Cirrix Capital but failed to disclose that he maintained personal investments with the company.  The investigation also reported that Lending Club improperly sold $22 million of loans, making it appear that the loans had met buyer requirements when they had not.    Additionally, it was also discovered that Laplanche and his family members were borrowed more than $720,000 from the online lender back in 2009 to inflate the company's numbers, influencing appeal among investors and consumers.

The stakeholder roughly refers to owners, distributors, employees, and consumers.  Stakeholders ultimately include anyone who can be affected by the decisions made on behalf of the business.  Lending club connected borrowers with investors for personal loans, auto refinancing loans, business, and medical financing loans.  The stakeholders behind Lending Club are most notably the investors, but also include the banking industry, consumers, national markets, and extends to employees, their families, and surrounding communities.  Lending Club also has stakeholders within advertising marketing strategies by partnering with widely known and used organizations like Facebook and Credit Karma.  The result of Laplanche's actions caused investors to lose confidence in the company, ultimately resulting in a 35 percent drop in company shares.  His deceitful business practices also take away opportunities from other corporations sharing the same market who are competing legally and ethically.

Milton Friedman's theory of individualism is built on a decision making process which keeps self interest in mind.  In a business frame, individualism theory aims to maximize profit for its owners and stockholders but must do so within legal limits and without fraud or deception.  Individualism theory maintains the idea that there is zero obligation to preserve social responsibility within their decision making process, rather their commitment is solely to maximizing profit.  From an individualist perspective, Laplanche was not making ethical choices on behalf of Lending Club.  Although he was clearly operating by self-interest, he did not do so legally.  Lenders rely on accurate analysis of profit and loss statements to determine appropriate risk management within their investments.  Laplanche cheated investors by having family members take out more than $720,000 in loans, falsely representing rates of return for Lending Club investors.  Laplanche created a pattern of deceiving operational measures that are crucial to understanding the credibility of a business.

Kant Theory or Kantian ethics is followed by evaluating actions and examining the motives behind them.  The Formula of Humanity is the central motivator behind Kantian thought.  The formula is about having a moral code and how we should act on behalf of ourselves and others.  Ethical business decisions reflect good will, respect, and thoughtfulness towards humanity.  When thinking of the way we treat humanity, it is crucial to ensure that our actions and decisions justify the means to an end.  Laplanche's business decisions go against the Kant Formula of Humanity simply because his actions take advantage of lenders by falsely representing the true success of Lending Club.  Laplanche lied to investors, asserting that their requirements for loan approval had been met when in reality they had not.  Inaccurately reporting that borrowers met loan requirements puts the borrower and the lender at financial risk.  Full disclosure of how Lending Club screened borrowers and processed legally binding loan paperwork, would have urged investors to allocate funds elsewhere.  As the CEO of Lending Club, Laplanche used his power to influence the board to make investments in a company that he has financial ties to, allowing him to personally benefit from company funding.
Utilitarianism 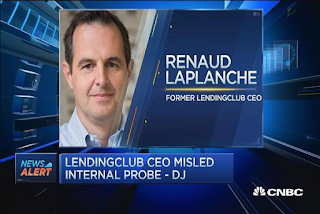 Utilitarian Theory compares ethical meaning to business decisions and actions which aim to maximize long term happiness for the greater good of all people.  It is important to note that within utilitarian theory decisions are determined by looking to the consequences of the action.  If there is a favorable outcome for the greater good of those impacted by the decision, then it is deemed ethical.  Considering that the company is a peer-to peer lending operation and is largely funded and dependent on investment firms, his choices truly shook Lending Club and its stakeholders at the core.  A utilitarian would not have made the same choices as Laplanche.  While Laplanche's decisions provide immediate, short term success, they do not offer a stable foundation for any type of long term prosperity within the marketplace.  A formal investigation and internal probe ultimately resulted in the loss of Laplanche's position as CEO of Lending Club.  When looking to the consequences of the actions, there is no argument that would stand against these choices as being ethical.

Virtue Theory is based on the emphasis of an individual's character, or their personal integrity behind their decision making process.  It is similar to Kant theory, though importance is more heavily weighted on justifying the means as opposed to the ends.  It is actions and decisions that are a direct reflection of the individual behind them.  Within a business mindset, virtue theory focuses on the character of an organization and how its actions serve as a representative of what any institution stands for.  Laplanche would not be considered virtuous or ethical in his actions.  Laplanche served as a poor representative for the face of Lending Club.  Laplanche showed negligent care for personal integrity, the business, and all of its stakeholders. His crooked scheme along unethical business path to help himself negatively affects all stakeholders and also makes forging a positive reputation a great challenge moving forward.

Morgenson, Gretchen.  "Lending Club, a Story Stock that Skimped on the Details."  The New York Times, 13 May 2016
https://www.nytimes.com/2016/05/15/business/lending-club-a-story-stock-that-skimped-on-the-details.html

Posted by Lindsey Cunningham at 3:46 PM