KPMG, a Big Four accounting firm, South Africa branch came under fire in 2017 after becoming entangled in a corruption scandal surrounding the country’s most powerful families, the Gupta’s. The Gupta family, also called the South Africa’s “shadow government” by members of the South African Trade Union, is a very powerful family, with close ties to South African President Zuma. Leaked emails fueled fears that the family was exploiting its friendship with President Zuma to win state contracts and manipulate political appointments; however, the Gupta’s and President Zuma deny all allegations. KPMG has been accused of helping the Gupta family in tax evasion and corruption; however, KPMG denies any wrongdoing.

KPGM has been auditing Gupta owned businesses for 15 years, and ended its relations in 2016. In a statement released by KPGM they stated: “KPMG South Africa regrets that its association with the Guptas and their business entities went on for far too long.” One of the many corruption charges brought against the Gupta family is the allegation that the wedding of one of the Gupta’s was funded with South African taxpayer money. Through leaked emails, KPMG allowed a Gupta owned business, Linkway Trading, to write off spending for the wedding as a business expense. KPMG, who audits Linkway Trading, failed to catch obvious red flags that would point to the irregularities in the business. It can be said that maybe the auditors purposefully ignored these red flags since four KPMG partners attended the wedding. Moreover, during the time KPMG worked with the Gupta's, they charged significant fees for their work, making a tremendous amount of money with the Gupta's.

In the wake of the scandal, CEO Trevor Hoole resigned while eight senior executives were dismissed from KPMG’s division in the country. Furthermore, the departures at KPMG came after an internal investigation which found the accounting firm had missed red flags in its auditing of companies owned by the Gupta family. Moreover, KPMG failed to follow firm policy and procedures which stated that they had to annually re-assess clients.The auditor stated that KPMG’s South Africa division, the firm’s largest business in Africa, had received warnings (regarding the integrity and ethics of the Gupta’s) that were not acted upon, and which should have led to it cutting ties with the family sooner.

As a result of this scandal, KPMG lost several audit contracts in South Africa, with more considering cutting ties. Moreover, the firm is being investigated by the South African regulatory body IRBA and risks being removed from the country’s auditor’s register. This could have major implications for the firm and its African businesses.

The stakeholders are people who are impacted by this scandal. The stakeholders in this scandal include: President Zuma, the Gupta family, KPMG, and the citizens of South Africa. The scandal revolves around KPMG and members of the Gupta family, who have been accused of facilitating the family in corruption and tax evasion. KPMG has facilitated the corruption by missing multiple red flags with the accounts of the Gupta family, and illegally assisting the Gupta family in their business dealings. By missing red flags and facilitating the Gupta family in their corruption and tax evasion, the Gupta family was able to steal billions in taxpayer funds and exert undue influence over the country. During the time, the firm worked with the Guptas, it was charging substantial fees for their work; the firm was making a lot of money by doing business with the Guptas. However, since the scandal was revealed, KPMG lost several audit contracts in South Africa, with more considering to cut ties. Moreover, the firm is being investigated by the South African regulatory body and risks being removed from the country’s auditor’s register as a result of KPMG failing to follow firm policy when dealing with businesses owned by the Gupta's. By failing to do this, KPMG caused long-term damage to the country of South Africa. The citizens of South Africa have been impacted the most in the wake of the scandal; citizens lost millions of taxpayer money to corruption. However, with the scandal coming to light, many determined citizens have started to form organizations, such as the Save South Africa group, a civil society group, to fight corruption within their government.

Individualism theory is to maximize profits for the owners of the business while staying within the law. During the time of the scandal, KPMG officially stated through an internal investigation that they did not perform any illegal actions nor exhibit any illegal behavior; however, since the statement came from an internal source, the accuracy of it could be questioned. On the other hand, leaked emails from KPMG and the Gupta family revealed that KPMG played a more active role in the corruption and tax evasion of the Gupta family.

These emails are a complete contradiction between what KPMG officially stated to the public. An individualist would argue that KPMG acted unethically even though they did not break any laws; KPMG missed key evidence that allowed the Gupta’s to evade taxes and continue their shady business dealings. Moreover, an individualist can argue that KPMG misled the public with their official statement, and tried to separate themselves with the Gupta’s to save face.

Based on the leaked emails, KPMG played a crucial role for the Gupta’s in their tax evasion and their controversial business dealings. These leaked Gupta emails are evidence that KPMG acted unethically under the theory of individualism. Furthermore, because of this scandal and the leaked emails, KPMG lost several clients, which has an effect on their profits. This leads right into the theory of individualism; KPMG did not maximize profits for its shareholders and based on the emails, KPMG assisted the Gupta’s illegally. Under Individualism, KPMG’s actions would be considered unethical. 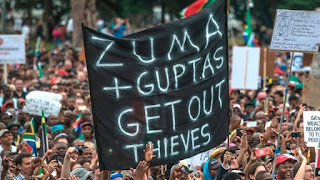 Utilitarianism is a moral theory that focuses on the results, or consequences, of our actions, and treats intentions as irrelevant. Utilitarianism is usually identified with the policy of “maximizing the overall good” or, in a different version, of producing “the greatest good for the greatest number" (Salazar 29). Any act that accomplishes this policy are good; those that do not are bad. A utilitarian would evaluate KPMG actions as unethical because they did not maximize the overall good and did not great good for the greatest number. KPMG failed to properly identify red flags and irregularities in accounts owned by the Gupta family, which caused a public outrage.

The costs and benefits from the scandal for the main stakeholders include: President Zuma - With the scandal coming to light, his reputation has been tarnished because the corruption that has been revealed in the government. However, on the flip side, President Zuma has probably gained more power and wealth because of the time it took for the scandal to come to light. The Gupta family - The Gupta family name and credibility has been tainted just like President Zuma's; however, the family gained tremendous wealth and power within South Africa. They were given state contracts and manipulate political appointments to further increase their influence in the state. KPMG- KPMG lost credibility as a firm in the accounting world for not catching the irregularities in businesses owned by the Gupta's. Moreover, they lost clients as a result of this scandal. However, KPMG, for a time, earned a significant amount of money for their dealings with the Gupta’s; however, with the scandal coming to light, KPMG did not benefit. The citizens of South Africa - The citizens of South Africa - The citizens lost millions in taxpayer money to corruption; however, with the revelations of the scandal, citizens are now forming organizations to fight corruption in the state. In the long run, the Gupta’s should be investigated for corruption and tax evasion. Furthermore, the South African government should impose heavy fines and sanctions on KPMG as a result of their dealings with the Guptas.

A Kantian would judge KPMG’s actions as unethical. The Kantian approach to ethics emphasizes first, allowing and helping people to make rational decisions and second, having a motivation that comes from what Kant calls the ‘good will’, which means that your motivation is from duty and is not simply self-seeking (Kantian Business Ethics). In KPMG’s case, they were not motivated to properly audit businesses owned by the Gupta family as they ignored signs of irregularities with those businesses. Moreover, KPMG was not motivated to do good for the public; they helped the Gupta family financially, which indirectly helped President Zuma, use taxpayer money for personal use. A Kantian would also argue that KPGM did not act morally. Morality for Kantians is constituted by how we ought to treat each other as fellow members of humanity. In the formula of humanity, a Kantian would argue that KPMG should have treated the public with respect, as they had a duty to. KPMG had a duty to properly audit the Gupta's businesses; however, they failed to follow company procedures which allowed the scandal to prolong. Additionally, KPMG stripped away the rational power of the public, therefore taking away their humanity. KPMG was not motivated to help the public, instead they were motivated by greed and allowed the Gupta family and President Zuma to carry on with their corrupt practices. A Kantian would reason that KPMG should have treated the businesses owned by the Gupta family with the same standards as other businesses.

Virtue theory focuses on a person’s (company) character and assesses whether their actions are virtuous or not. Virtue theory focuses on a framework by asking “whether the actions under consideration embody or advance virtues or not” (Salazar). This theory is based off four main virtues that represent the scandal the most: honesty, courage, care, and justice. A virtue theorist would argue that KPMG’s actions do not embody or advance these virtues, in fact their actions are the opposite of what these virtues represent. Additionally, a virtue theorist would argue that KPMG was not honest in their dealings with the Gupta’s. In many of their dealings with the Gupta’s, KPMG stated they had a limited role in their business activity; however, leaked Gupta emails revealed that KPMG was involved more than they said they were. Moreover, a virtue theorist would argue that KPMG did not have the courage to do the right thing. Auditors and partners at the firm were aware that KPMG was not following firm policy and ignoring evidence that could hint to unusual activity in Gupta owned businesses. However, not one of these people came forward and did the right thing. Additionally, KPMG did not show any care to the situation. After the leaked emails that linked them to the assisting the Gupta’s in corruption and tax evasion; KPMG still has not admitted their guilt for their part in the scandal. Their care to the situation is very little; the firm is not accepting any responsibility to this case and are trying to separate themselves as fast as they can. By assisting the Gupta’s in corruption and tax evasion, KPMG did provide any justice to the citizens of South Africa. In fact, KPMG created an injustice for the people of South Africa by allowing the Gupta’s to gain more power and influence within the country. Under virtue theory, KPMG’s actions would be considered highly unethical.