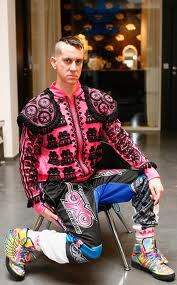 Adidas is a worldwide brand, in fact, it is the largest sportswear manufacturer in Europe and the second largest in the United States. Adidas was named the 53rd most powerful brand in the world by Forbes magazine in 2010. A big part of that had to do with the 2008 signing of designer Jeremy Scott. If you have seen a wacky/unique pair of Adidas being worn around, it is most likely the artistic creation of Jeremy Scott. Scott is well known for his "wings" shoes, which are very popular with athletes, musicians, and fashion icons. In the summer of 2012, Scott was back to his ways, making another strange and artistic design. Adidas released a picture of the "JS Roundhouse Mid" on their Facebook page and immediately caused an outcry. People were going crazy because attached to the shoe was a yellow chain with a "shackle" on it. Critics believed this was evoking slavery and that Scott and Adidas were racist for thinking it was alright to produce a shoe with a shackle on it. Even the famous Reverend Jesse Jackson released statements of disgust saying how "appalling" and "insensitive" the design of the shoe was. Jeremy Scott quickly released a statement saying “My work has always been inspired by cartoons, toys, and my childhood". Scott says that this particular shoe was designed after one of his favorite childhood toys, "My Pet Monster" It is clear to see that the toy and shoes are very similar in that the toy has handcuffs around its hands that look just like the so called "shackles". When looking at this case using the different normative theories it is very interesting, especially considering Adidas stopped production on the JS Roundhouse Mid and never even released them.

IndividualismIndividualism states that the main goal of a business is to maximize profits for the stockholders and the owners of the company. It also states that to be ethical it must be legal. With the case of the JS Roundhouse Mid, it is very interesting when discussing an individualistic point of view because it could be viewed as either ethical or unethical. The ethical side to the sneaker is that Adidas and Jeremy Scott did not break any laws when they designed the shoe. If they had released the sneaker, Adidas and Jeremy Scott would have both profited greatly from it. People on sneaker blogging sites were very excited for the release of this shoe and many said they would purchase, despite the $350 price tag. The problem with this is that the shoes were never released so no profit was ever made. Under individualism, this would be considered unethical because profits were not maximized, in fact, Adidas lost money by designing and producing this shoe. If you view it from that angle then you can see that this case would be anti-individualistic, causing it to be unethical. 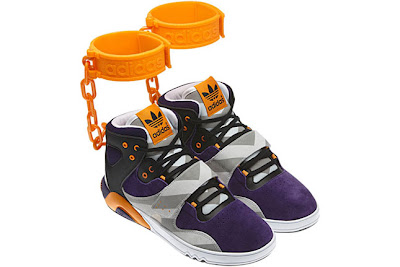 Utilitarianism
Utilitarianism theory is about maximizing happiness in yourself and in others. With the case of the JS Roundhouse Mid, it is clear to see that maximizing happiness is the complete opposite of what actually happened. The stakeholders that were against the shoe were in rage at the fact of there being a shackle on the sneaker. Many people questioned if there was anyone of color in the room when this design was being drawn up. The stakeholders that were for the shoe, that were excited about buying the shoe, were also unhappy because the shoe got dropped and was never released. The two biggest stakeholders in this case, Adidas and Jeremy Scott where both unhappy with the way things turned about because they were being pinned as racists and made no profit. This case is a perfect case for a utilitarian because no one was happy, making it easy to see that this case was unethical.

KantianismThe ethical theory of Kantianism has principles that include acting rationally, making rational decisions, respect people, and be motivated by Good Will. Kantians would not think this case is ethical because, although I believe it was unintentional, Jeremy Scott and Adidas did not make rational choices when he was designing this sneaker. Many people saw nothing wrong with the shoe but he should have taken into account that some people would pick it apart and call his design a "slave-like" sneaker. It is clear that this sneaker was extremely disrespectful to some people, especially the African American population. This case is very unusual because I believe that Scott and Adidas did not intend to harm anyone or disrespect anyone in any way. Jeremy Scott and Adidas were not motivated by Good Will but instead motivated by the potential profits they could have received if the shoe was released. Scott was using people as a means and not as ends because he really just wanted to make profits off the sales. I believe Kantians would find this case extremely unethical.

Virtue Theory
Virtue theory has four parts, including courage, honesty, temperance, and justice. I believe Jeremy Scott and Adidas were ethical when it comes to the virtue theory because they showed all of these traits when designing and promoting their shoe. Scott showed his courage when designing another shoe because he never knows if they are going to be successful or not. He takes chances and for the most part, they have worked out for him. Scott also showed honesty when he came out with a statement saying how the shoes were inspired by a favorite childhood toy "My Pet Monster". Scott showed temperance because he had reasonable expectations when he was designing the shoe and that was for people to like them enough to purchase them. Scott and Adidas showed justice because they worked extremely hard and spent countless hours designing and producing a sneaker that in the end, did not even get released. I believe that through the virtue theory the JS Roundhouse Mid was ethical.

Although it may not seem like Adidas and Jeremy Scott acted ethically, in my opinion, I believe they did. They did not break any laws and they did not have the intent of offending anyone with the release of this shoe. I think it is a shame that people can take someone's hard work and critique it so much that they can not even share it with the public. I believe it shows what kind of company Adidas is when they decided that the goal of this shoe was not to offend people so they would take the loss and not release the sneaker. I think that really helped their image after facing such an ethical controversy like this one.


These facts and analyses are based on an original research paper by Jack Reed, "Adidas "JS Roundhouse Mid" gets "shackled"" (2013)