Controversy
The University of Southern California opened its doors in the city of Los Angeles in 1880.  Back then it served as an educational institution with fifty-three students and just ten teachers.  Today, the university is home to more than 33,000 students and nearly 3,500 faculties.  As an institution for secondary education opportunities, the university is highly regarded for its academic offerings.  In 1999 the school was named “College of the Year 2000” by Time magazine and the Princeton Review.  USC is highly regarded by the city of Los Angeles too; it has been reported that the college is responsible for $4 billion annually in economic activity in Los Angeles County.

As invested in academics and community prosperity as the University of Southern California is, they are equally invested in their athletics.  With 19 teams between men and women, the school prides itself in competing at college’s highest level, NCAA Division 1.  USC prides itself in dominating college athletics too.  Since their inauguration, USC men’s and women’s athletics have combined to win 117 national team titles.  No school another school in the nation has as many Men’s NCAA championships (81).  And in the twenty-six years between 1959 and 1985, USC had at least one national champion each year.  For that reason, the USC “Trojan” has become a logo and mascot widely recognized and widely respected in the sports world.
In the highly competitive, richly funded, immensely popular, and a cutthroat world that is NCAA Division 1 athletics, the name of the game is quite simple, and that name is “WIN”.  Sport is arguably a University’s biggest advertising opportunity.  The team carries the school brand.  The more successful and dominant the team is, the more public attention it receives.  Different college athletic programs do different things to ensure that success and gain that attention. 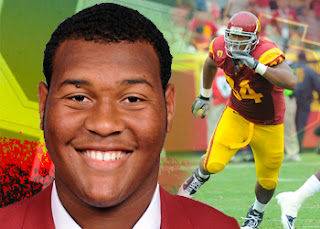 It is the football team of the University of Southern California that comes under scrutiny in this case. Their commitment to winning and their willingness to do whatever it takes to achieve that victory is what has the program in hot water. In August of 2012, former USC football player, Armond Armstead, filed a 38-page lawsuit in Los Angeles Superior Court that claims he “received improperly administered painkilling injections that caused him to suffer a heart attack and hurt his chances of an NFL career”. The lawsuit claims too that representatives at USC hid the injections from other doctors and claims that USC “hindered” Armstead’s attempt to transfer to another University for his senior season.
Armstead enrolled at USC and became student-athlete there in 2008. According to sources, the 6’5’’, 300 pounds, Armstead was a standout player in his first three years there. His junior year as a Trojan was by far his best. In that 2010 season Armstead played defensive end and recorded 43 tackles; 6 of the tackles were for a loss and then 3 of those 6 were sacks. Based on his play as a junior, it was projected that Armstead would play a pivotal role, and be a fearsome force in USC’s defense as a senior the following year.
According to documents in the lawsuit, Armstead began experiencing chest pain in early 2011 while working out and conditioning in preparation for spring practice his junior year. He sought help and treatment at university health facilities and was given injections on two occasions to ease the pain he was experiencing. Armstead did not know that he was receiving injections of Toradol though - a drug that is clearly labeled as having such risks as “heart attack or stroke”. Documents continue to describe how while hospitalized, it was found that Armstead had suffered an “acute anterior apical myocardial infarction” (a heart attack), and a “substantial factor” in causing that heart attack was the “administration of drugs”. 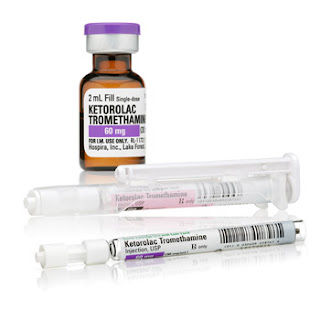 Armstead received injections of Toradol multiple times over the course of the 2010 season from the team doctor and other USC personnel. He claims that players knew the drug only as “the shot” and they would go to a specific training room to receive the injection before big games and at half He also claims that there were some games where he had pain so severe that he would not have been able to play had it not been for the injection of pain relieving medication. According to Armstead, the injections made him feel “super human”. He didn’t know the drug or its potentially harmful effects but trusted the team doctors, took their advice, and accepted the injections.
After suffering his heart attack, Armstead’s lawsuit claims that “the school ignored the stated risks of the drug and never told him about them”. The manufacturers’ label for Toradol (a.k.a. ketorolac tromethamine) advises that the drug is not intended for extended periods or for chronic pain. Potential risks of the drug explained in its label, include gastrointestinal bleeding and kidney failure as well as increased risk of “serious” cardiovascular thrombotic events, heart attack, and stroke, “which can be fatal”. The drug also warns that the affiliated risks “may increase with duration of use”.
Armstead was never cleared by USC doctors to play his senior year, and he was never chosen in the 2012 NFL draft.
In all four phases of ethical theory, being Individualism, Utilitarianism, Kantianism, and Virtue Theory, the mandatory injections of Toradol given by team doctors to USC football players can be considered highly, and without a doubt, unethical.

IndividualismAccording to Individualist Theory, a business is acting within ethical standards when it makes a profit for its stockholders or focuses on their interests, but doing so while pertaining to the laws of society and respecting human rights. Evident from their records in past years, the number of national championships they have won, the number of players they have fed into the NFL, the facilities they use, and the dominance they continue to have in college football, it is easy to say that the football program at the University of Southern California and the University itself are focused on the pursuit of winning – the pursuit of success – and the pursuit of profit. There is nothing illegal about USC’s use of Toradol. The drug is not banned by the NCAA. Furthermore, unlike professional sports leagues (NFL, NHL, NBA), the drug is not even regulated by the NCAA. It is the third and final requirement where USC football violates the ethical theory of individualism. In their team doctors’ application of the painkilling injection, Toradol, they did not act in accordance with human rights. One of the most important human rights is the privilege and right to be “treated as autonomous decision makers, free from coercive interference by others”. USC football players were denied this basic but ever important right. If they came to the doctor with an injury that could be treated with an injection of Toradol, the doctor gave them no choice but to receive the injection 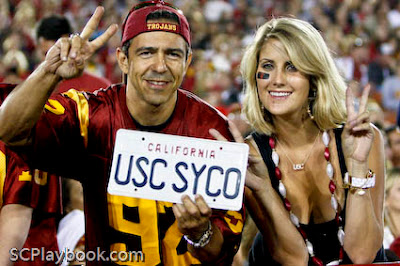 Utilitarianism
According to Utilitarianism, an action is deemed ethical if it promotes all-around happiness to all parties affected. Happiness is the only thing of intrinsic value in the minds of Utilitarians. Some stakeholders in USC football did obtain happiness through the actions of the team doctors and the injections of Toradol they gave to injured players. These injections allowed players to continue playing despite having injuries that would have otherwise kept them out of the game. Those players helped USC win. The happiness of the players who received the injections, like Armstead, was fraudulent or fake. They were happy because they could play through injury with no pain at all by just receiving a simple injection. All they knew is that the drug made them feel better and allowed them to keep playing the game they love. The team doctors did not warn them of the possible underlying effects – the possibility of heart attack, stroke, or even death. Realizing the threat to their life that each injection was, players who received Toradol would not have been nearly as happy.
KantianismKantianism is based on the values that ethical activity is only possible when the acting party conducts them self rationally in the goings-on of society. A business entity should never consider itself exempt from the rules. People, their autonomy, and their individual needs and interests must be respected in order for any activity carried out, to be considered ethical by Kantian philosophy. The football team’s medical staff was encouraged by the football culture at the university to return Armstead and other players to the playing field as quickly as possible because the team has the best chance to win when its best players are out on the field. In injecting Armstead, and other injured players with Toradol, without disclosing the name of the drug or its potential threats, all focus was being put on the team and its desire to win rather than the short-term and long-term health of the individual who was being injected with the powerful painkiller – a painkiller with side effects that included possible heart attack, stroke, and death. This given scenario is a clear indicator in itself that players were being used by USC as a means to an end.
Virtue TheoryVirtue Theory is based on four virtue characteristics. If a business entity acts in a way that fits the four characteristics, it is, therefore, acting ethically. The four virtue characteristics are courage, honesty, temperance, and justice. The courage characteristic represents an entity's willingness to take chances, and to stand up for what is right. The honesty characteristic represents an entity's willingness to be truthful with the public and all other parties involved with and affected by the business activity. Temperance represents the ability of the entity to set realistic expectations and justice represents hard work and fair practice. The USC football program and its team doctors upheld none of these virtues. The doctors opted to demonstrate a vice of cowardice rather than courage. They hid the details of the drug to Armstead and others, they didn’t warn of any health risks, and they didn’t offer any alternative healing methods. When the doctors should have been demonstrating honesty, they opted for deception. By not telling the players about the seriousness of the drug and its possible side effects, they were keeping the very vital information a secret. There was no temperance by the medical staff. Had they demonstrated temperance, USC doctors would have accepted the fact that injuries occur, and they would have held the injured player/players out of games until the injury naturally healed on its own. The doctors did not demonstrate a virtue of justice either, but instead, they demonstrated injustice. Their idea to use a drug on student-athletes that carried the risk of heart attack, stroke, and possible death was not a good idea. And their decision to make injections of that drug mandatory without disclosing the risks was not fair to players like Armstead.
The USC football scandal involving injections of Toradol given to players is 0-4 when held up to different ethical theories which simply goes to show that the actions taken by them were without a doubt, and conclusively, UNETHICAL, no matter what angle one chooses to look at it from.

These facts and analyses are based on an original research paper by Nate Russell, "USC: The Use of the Drug Toradol, to Treat Athletes' Injuries"

USC National Titles. (2012). Retrieved from http://www.usctrojans.com/trads/usc-nattitles.html
Posted by Nate Russell at 8:55 AM