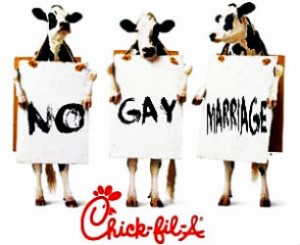 Chick-fil-A is the second largest quick service chicken restaurants in the United States. The restaurant was opened by Truett Cathy in 1946 and currently have over 1,000 restaurants nationwide. They last  reported $4.1 billion dollars in sales revenue. For religious beliefs, Chick-fil-A is closed every Sunday, just like the way stores used to be. On July 2, 2012 Dan Cathy, COO, was interviewed by the Baptist Press when a question about his thoughts on marriage arose. Dan Cathy stated that he supported traditional marriage over gay marriage. He was also quoted saying "We are a family-owned business, a family-led business, and we are married to our first wives". There was an instant outbreak of hate across the nation towards Chick-fil-A. Rallies, protests, and boycotts all occurred at many of the restaurants. Due to all of the media coverage, there was an increase in sales revenue after the controversy began. The stakeholders of the company were greatly affected, especially the customers. Without a solid customer base, Chick-fil-A would not be able to function. 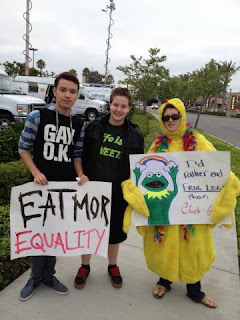 Chick-fil-A was considered unethical in three out of the four ethical theories that I will discuss. The theory of individualism is to pursue the interest of the company, such as profits, but to do so within the constraints of the law and human rights.  An individualist would agree with the statements of Dan Cathy because he acted within the interests of the company and increased sales revenue for the restaurant. This was all done within the constraints of the law that is granted to everyone by freedom of speech.  The theory of utilitarianism is to maximize happiness for all people including the stakeholders. An utilitarian would say that Dan Cathy and Chick-fil-A were unethical in this case. The happiness of their stakeholders were not considered before making such a harsh statement. Gay rights activists have been pushing for a very long time for a movement to be made in their favor. When the movement began to push forward, Chick-fil-A disappointed many people by not supporting them.

The Kantian theory is based off of doing what is right, because it is right. An important concept is not to treat people as means and respect humanity. A Kantian would not support this case and would rule that it was unethical. Dan Cathy did not think before he spoke about a large group of people. There was no respect for the gay community or the community at large. This is a way of life for people and means alot to them. Virtue Theory 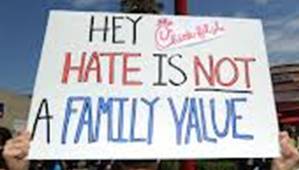 consists of four main virtues; courage, honesty, temperance/self control and justice/fairness. In this case, courage was displayed since Dan Cathy went against how society feels, and stated his beliefs to the media. He knew there would be repercussions, but he felt strong about his beliefs. Honesty was displayed when Dan Cathy replied to the interview question with the truth and did not lie. Temperance was also shown in this case when he did not hold back his feeling about gay marriage. Lastly, justice was not shown in this case since it was not fair to the gay community.

Chick-fil-A did not publicly apologize for anything that was said by Dan Cathy. After he made the statement and the media went crazy, Chick-fil-A decided that it would be best if they left this debate to the government. It is important for the stakeholders, especially the customers, to know that Chick-fil-A respects everyone. They love and treat all of their customers equally.


These facts and analyses are based off an original research paper by Jacqueline Lambros, "Chick-fil-A: Gay Rights Controversy" 2012

Posted by Jacqueline Lambros at 7:25 PM