Paper Based of off: Patrick Cameron

Barclay Bank is one of the oldest bank founded in 1690, the bank is located in London, England and is the 6th oldest bank that is in existence that is still operating today. Barclay works with corporate banking, investment banking, and wealth and investment management. The main realm of focus with Barclays is the London Stock Exchange in England. The London Stock Exchange works off of the Libor system, the London Interbank Offered Rate (LIBOR) Libor rates are made when the major banks estimate the average interest rate and would determine the interest rate if they borrowed from other banks.In England, the Libor rate is the standard interest rate that banks have and is the price money is exchanged.

The Libor rate scandal described by Andrew smith in an article featured in CNN Money, “The Libor rate -- currently used to calculate trillions of dollars in consumer and business loans around the world -- has been in the spotlight since revelations that Barclays manipulated Libor to benefit trades and its own bottom line. Libor is used to set interest rates on mortgages, loans and swaps contracts worldwide.” (Smith) Barclays in 2007 started to submit higher than normal interest rates, and this caused some talk to go around that began to question some of the motives of the company. Then later on in the next year, the bank began to under report the rates that it was setting, so they would not stand out as being the outlier of setting the rates too high. In 2011 four officials from the Royal Bank of Scotland were fired for trying to give false Libor rates. In 2012 Barclays admitted to misconduct with giving false information to the Libor system. The company was fined over £290m with their involvement and the Financial Service Authority (FSA) and the British Bankers’ Association (BBA) are still investigating the company. August 2012 Barclays chairman Marcus Agius resigned from the company. Then one day later after Agius resigned, chief executive Bob Diamond did that same thing, “saying that the external pressure on the bank risked ‘damaging the franchise’”. (BBC Business News) The chief operating officer Jerry del Missier, followed Diamond and resigned the same day.

Individualism: States the only real purpose of companies is to maximize the profits for all of the stockholders. This theory stated how a company should disregard all other factors in the whole business atmosphere, and they should concentrate on making a profit. There should not be any concern from the company with all the people that were not the stockholders.The bank tried to fix the Libor rates, executives were trying to make a personal profit from giving false information and having an upper hand in the London Stock Exchange. These people had a stake in the company and would have benefited greatly if the Libor rates were in their favor. The Individualism theory did not favored the actions of the people at Barclays, because the executives of the company were acting in their own greed.

Utilitarianism: Is this idea of happiness with the consumers in all ends of the business transaction. Consumers in this case would be people who would deposit, transfer, or invest some of their money with Barclays or other banks within in England. The interest rates set up by the Libor rates would directly affect the consumers and how they invest their money. The rates would also affect the Stock Exchange and how other banks and customers traded within the system. The higher the interest rates, the more likely people would not invest or trade money. While it was lower, people would feel more willing to invest their money. Barclays does not act in the best interests or tries to make the consumer happy with their business. They were actuing against what was good for the consumers.

Kantianism a company must act rationally and companies must not consider themselves exempt from rules. Companies must also help people to make rational decisions, while along with helping people; they must respect people, their autonomy, and individual needs and differences. Finally, a company must have the motivation to act with good will towards the consumer. The company did not act rationally by suggesting outrageous rate with the Libor system. They also should not have considered themselves above the all the rules and regulations that everyone else was forced to follow. Barclays Bank was shady by giving over and under estimated amounts of rates within the Libor system. The bank was misleading consumers to wrongfully invest. This is not in the best interest of the consumers of the bank, and Barclays was absolutely not acting with good will. Barclays did not act rationally and with the consumer’s best interests in mind.  The Bank did not care about all the investors or other companies they may have hurt.

Virtue Theory: is a set of values and morals that companies should have in order to run a company properly. These values are courage, justice, temperance, and honesty. Courage is displayed with how the bank started to play with all the interest rates. But this courage was done with not the best intentions. The Barclay Bank was supposed to abide by the law in all business transactions, but they did not do this which interferes with the justice part. Playing with the Libor rates was not conservative and acting with self-control. With the injustice they did, they did not have any honesty with any of their actions trying to gain money for their own personal wealth. Barclays Bank did not act in according to the virtue theory, making everything they have done towards the Libor system unethical. 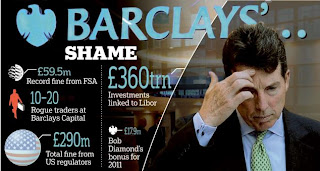 Barclays has to do a major public relations campaign to try to gain back some of the trust lost with the incident. They need to show and reinforce that they are a good bank to use and they will not do anything like they did again. Ways they could do this: Start an advertising campaign to show that they are starting new. They would show they have new management and executives running the company Joining or starting some charities. Doing some goodwill projects will show that they care about the consumers and are willing to spend a good amount of their money to make the consumers happy. It could be as easy as donating money to some major charity. Overall, Barclays needs to show they are turning over a new leaf and looking to be a better company in the future.