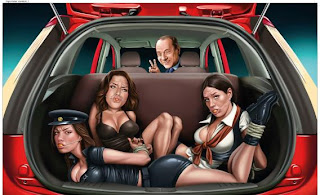 Ford has found themselves in hot water after their advertising agency in India let controversial posters of women bound and gagged in the back of Ford’s new car model leak to the Internet. The American multinational automaker spends over $1 billion on advertising expenses per year. Ford has found out the hard way that they will clearly need to keep a closer eye on where that money is going towards in the future. The first poster portrayed three barely clothed women in the trunk, with former Prime Minister Berlusconi, flashing the peace sign in the front seat. Due to Berlusconi’s history of throwing exotic sex parties, and whom is currently facing charges of paying for sex with underage women, the irony was intended to create humor. The second ad shows a winking Paris Hilton in the front seat, with the three Kardashian sisters bound and gagged in the trunk. Hilton and the Kardashinas have been reported to be feuding over fame for the past few years now. The message revealed with both pictures: "Leave your worries behind with Figo's extra-large boot (trunk)." Despite that Ford did not pay for the publication of these posters, their name and product is tied to the ad, making them guilty by association. Ford has said in a statement, “We deeply regret this incident and agree with our agency partners that it should have never happened.” Causing even more of an uproar, the images were initially leaked in India, where they have been severely fighting issues against women violence. 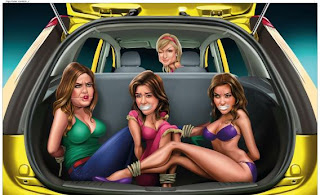 Individualism is an economic theory that aims to maximize profits in any way possible, as long as no laws are broken. In this case, consumers found the ads extremely inappropriate and offensive. Because the posters tarnished Fords reputation and actually discouraged consumers from purchasing their new Ford Figo by offending over half their market, individualism would reject the creation. Had the ads intended humor created buzz and encouraged consumers to purchase the new model, the theory would have accepted their creation.
Utilitarianism determines what is ethical based on the happiness of the stakeholders. The stakeholders in this case are: Ford, JWT Advertising Agency, women, more specifically women in India, and anyone else who viewed the ads. The majority of the media interpreted the ad as a degrading portrayal of women all over the world, more specifically the ads were insensitive regarding the struggles women are going through to protect their safety in India. Because the controversial images and the messages behind them offended so many individuals, it jeopardized their happiness, therefore, the theory is rejected. 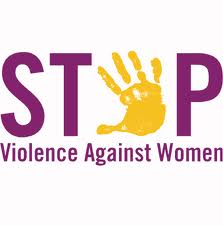 Kantianism consists of four major principles, the first being to act rationally. The leak of the degrading posters was not a rational action because it was such a controversial topic. Making light of and humoring a sensitive matter is not an intelligent move for a company selling to the public. The second principle encourages people to make the right decision. Promoting women bound and gagged in the back of Ford’s new Figo, with the quote “Leave your worried behind in Figo’s new extra large boot (trunk)” is not a means to help consumers make rational decisions. The third principle says to respect people, their autonomy, and individual needs and differences. The ads were created as a mere means and ignored how the portrayal was extremely degrading towards women. The fourth principle says to be motivated by good will. Attempting to create humor out of woman’s rights, focusing more specifically on the violent crimes against women in India, is an unethical marketing strategy. Had Ford’s agency been motivated by good will, they would not promote products by making light of sensitive societal issues.
Virtue theory supports characteristics that allow things to function properly. Although virtues are essentially limitless, there are four primary virtues, which are important to follow. In this case, virtue theory is rejected because the creation of the ads neglected those virtues. The first is courage; Ford’s agency was showing courage when taking the risk to create the ads. Generally companies try to avoid promoting controversial issues because it is easy to misjudge their consumer’s reactions. Honesty is another primary virtue, as of right now whether or not Ford is being honest is unknown. Because Ford did not create the ads in house, they appear to be showing justice as they apologize to consumers for the insensitive actions of their agency. 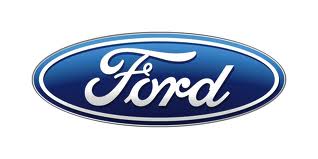 In my opinion, Ford still has some work to do in order to convince their consumers they do not stand behind JWT’s decision to create the ads. Because women hold over 75% of the buying power in U.S. households, the controversy has potentially offended over half of Ford’s market. Choosing to not address this issue can tarnish the company’s reputation indefinitely. My advice to Ford is to fire JWT advertising. Cutting ties with the agency will help disassociate themselves from their offensive material. In a world where women have given their lives to promote women’s rights, Ford cannot afford to associate themselves with a company whom makes light of these issues. Moving forward, Ford needs to do their research and make sure they hire an advertising agency that shares their same upright morals and ethics as they do.

These facts and analyses are based on an original research paper by: Katie Guckel, "Ford Receives a Great Deal of Backlash Over Advertisement in India"