Abstract:
Sears was once the largest retailer in the world in 1969. The business success was massive, with the construction of the Sears Towers signifying its dominance in the world of retail. The business success was huge in the succeeding years, with the now big giants Walmart and Amazon not matching its success. The merger with Kmart was historical, as the move would mean that the two giants would be operating close to 3,500 locations (Vault, n.d). In the first year of operation as two companies, sales rose astronomically, but it began to fell in the succeeding years. Besides, the profits started to drop from 2006, with the main peak being in 2014 when its debts became massive. The company’s move to reduce the number of its workers in a move to cut costs during the period of turmoil led to low staff morale in the process resulting in customer care deteriorating. The climax came with the massive debt of $ 5 billion that made Sears Holdings file for bankruptcy (Siemaszko, 2018).
The main issue with Sears Holdings was how it handled the payout of its employees after bankruptcy. The business paid the executive workers $ 25.3 million in bonuses, while the junior employees got a severance cut (Siemaszko, 2018). This move meant that the junior workers would be late in meeting its bills, while the top executive was enjoying hefty pay. The central claim of retrenched workers was that the issue of bankruptcy laid with the executive workers as their inaction is what led to Sears Holdings failing to hit its financial targets. The approval by the bankruptcy court on the bonuses of executives and severance of pay cuts to junior workers led to a huge uproar.

Ethics Case Controversy:
Sears was once the largest retailer in the world in 1969, with the merger with Kmart leading to the operation of close to 3,500 locations. Financial turmoil led to low staff morale in the process resulting in the customer care deteriorating. 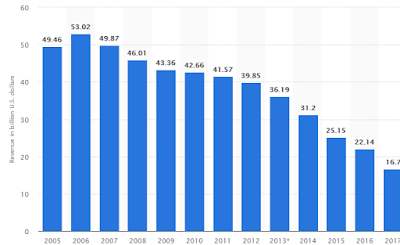 “Sears Holdings Sales trends 2005- 2017”
The main issue in the case study was the payment of the executive workers $ 25.3 million in bonuses, while the junior employees got a severance cut. 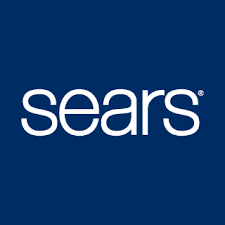 Stakeholders:
The biggest stakeholders of Sears Holdings include employees, creditors, and customers.

Individualism:
Ethical theories will be significant in the explanation of the actions of Sears Holdings .The individualists do not think that being unique from the group is unethical (Ahuja, van der Schaar, & Zame, 2015). Under individualism, the rights of a person take center stage. For a person that believes in the upholding of individualistic behaviors, the move by the company to award the top employees $ 25.3 million in bonuses is commendable. Individualism proclaims that being dependent on others is shameful.

Utilitarianism:
Utilitarianism provides that the most ethical action is the one that derives the maximum benefit or outcome (Eggleston, 2012). Sears Holding under this approach was unethical. The main concentration of the management was not to satisfy the majority, but rather to reward what they thought was the deserving staffs. Utilitarianism would still consider the action by Sears Holdings as unethical.

Kantianism:
Kantianism claims that the morality of an action is not on the outcome but majorly on the process. Kantianism does not dwell on Consequentialism. The consequences of an act do not matter in the case of Kantianism. According to Kant, there should be respect for the dignity of a rational human being anytime (Dan-Cohen, 2011). The action to pay the executive workers of the payout handsomely, while at the same time pays the junior workers poorly qualify as an unethical practice under Kantianism. In the case of Sears, there was no dignity to the junior employees, since they ought to have received good severance pay.

Virtue ethics:
Virtue ethics is similar to Kantianism (Ainley, 2017). Virtue ethics provides that action matters as part of ethics rather than the outcome. For Sears Holdings, the administration failed to act as another person in the same position would act. There was no need to pay the bonuses affiliated to the executive human resources, while the larger population was suffering. The administration of Sears Holdings could argue that virtuous ethics does not provide a framework that would facilitate ethical practices.

Action Plan
It is undeniable that the success of an organization depends on its employees. The most crucial move in attracting customers is taking care of the workers. Poor treatment of human resources will result in the same treatment to customers. 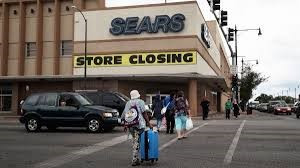