French male journalists, advertising executives, and bloggers have recently been exposed for using social media platforms to harass female activists and journalists in what has been referred to as the French #MeToo movement.  They called themselves Ligue du Lol, or Lol League in English and as expected, was mainly composed of men. The group, created by Liberation journalist Vincent Glad, was created in 2009 as a private place for members, who were mostly men, for trolling. Glad wrote in his apology on Twitter that "By creating this group, I created a monster that got out of my control." (Gold) The harassment included video montages, rape and other distasteful jokes made, and in one severe case, a fake job interview was recorded and posted online. David Doucet, was fired from his position at Les Inrockuptibles after taking full responsibility. Victim Daria Marx, related the experience to "running away from a sniper" (Gold) The men did not just target women, however. They are accused of using targeted feminists, writers of color, and members of the LGBTQ community.  The anti-discrimination group SOS Racism has already filed a criminal complaint for "Sexist, homophobic, and racist harassment." (Allen)

The group was exposed by Liberation itself after an investigation by their fact-checking unit began. The fallout is as many would expect: the members of the group have been outed and face repercussions from their employers.  David Doucet has already been terminated while most, including Vincent Glad, are either facing suspensions or will have their work overseen by a supervisor. Another member Alexandre Hervaud, who also worked for Liberation was suspended with Vincent Glad but took to Twitter to attack all of the people celebrating his suspension, causing investigations into both he and Glad. Christophe Caron of Slate has also been investigated but claims to have been just a passive member.

The stakeholders, in this case, include the companies that employ the men like Slate and Liberation. They also include the members of the group who engaged in harassment such as Glad and Doucet as well as the victims of the torment such as Daria Marx and Florence Porcel.

The members of the group did not act ethically towards the victims from an individualist perspective.  According to Friedman, all that matters at the root of individualism are profits for the stockholders. While not in a business context, profit can be related to the gains that the people involved get out of the exchange. The men in this sense tried to maximize their profit by putting many women down and trying to assert their dominance. The women involved are also stockholders in this scenario, therefore, their profit has additionally been stolen by the men in terms of their emotional stability.  When looking at individualism through Machan’s standpoint, the men look even less ethical. Machan’s view takes Friedman’s view and adds that a business can have non-profit oriented goals and can prioritize those goals however they choose. The men did not have any goals that did not relate to profit and that did not rob the company. All their actions were to deprive the women, who are stockholders of what they value, whether it’s self-respect, respect from others, or possible career advancements.

From a utilitarianism perspective, the men were not acting ethically towards the women. Utilitarianism revolves around maximizing happiness for all, as it is the only thing of intrinsic value. The men deprived the women of their happiness through the constant beratement and harassment. They bombarded these poor women with rape jokes, death threats, and in one case, a fake job interview that was made public with the sole intention of embarrassing Porcel. Porcel even came out and said that after the recording went public, she did not leave her house and cried for three days straight. That is not allowing someone to happy. Due to the fact that happiness is valuable, there is no quantifiable difference between the men’s happiness and the women’s happiness, so it does not matter that the men became happier through their actions to any degree because the women lost happiness to a degree.

From a Kant perspective, these men were not acting ethically towards these women. The basic principles of Kantism are to act rationally, respect people, and to be motivated by Good Will. The LOL League members did not meet any of these principles. It can be assumed that a rational person would know better than to unload a wave of hate towards a group of women who undeserving of any of it. They showed no respect towards the women and held unfair prejudices against them. It was never announced as to why the men acted the way that they did, but common speculation suggests that the men felt threatened by the rise in power that these women had been gaining.  The actions of the men did not come from Good Will because they were not rational (as stated above) and they were not rightly motivated. Their goal was to hurt these women emotionally and, in their careers, which can be deemed as wrongly motivated. They also did not follow the Formula of Humanity. The Formula of Humanity asks us to “Act in such a way that you treat humanity, whether in your own person or in the person of another, always at the same time as an end and never simply as a means” (Kant, MM 429). The women were used as means to an end by the men who were trying to make themselves feel better. They did this by degrading the women to believe that they still had power over the women.

According to virtue theory, the four main virtues of character used as criteria are courage, honesty, temperance, and justice. Based on these four virtues, the LOL League was completely unethical in their actions. Courage is taking a stand when you feel fear and doing the right. These men were cowards, hiding behind faux internet personas to harass and embarrass these women.  Honesty is the next virtue that these men failed to have. They let their prejudices influence their behaviors and would create photoshopped pornographic photos of the women they were harassing, trying to discredit them. They also lied to a woman about a fake job interview and posted it online. These men were deceitful and anything but truthful in their quest to harass these women. Temperance is easily the virtue that these men lack the most. They showed no self-control in their actions and acted in an irrational manner. The creator of the group Vincent Glad acknowledged that this group was supposed to be a safe place for the men to make misogynistic jokes, but it grew into a monster that spiraled out of his control. Any reasonable person is able to see how excessive and cruel these men were. Enter the final virtue: justice. These women had no issues or problems with these men, they were just living their lives and doing their work. These men took it upon themselves to go out of their way and harass these women, ruining their self-confidence and negatively impacting their careers. 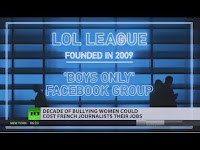 The men involved in the group demonstrate how dysfunctional society is all over the world. As much as we ourselves like to think of humanity as a whole as good, more honest evaluations show how cruel people can be. In this scenario men, who as assumed, are all straight white men abuse the power that has been inherently passed down generations to dominate those who are not them. While present in America, it is even more prevalent in France who seems to lack in gender progression. All the members of the group, even those who were not active are all unethical as they partook in the oppression of groups of people that are seen as inferior to them, whether it was women, people of color, or members of the LGBTQ community. They robbed those victims of their voice and made them fear opening themselves up to the rest of the world. They took away their confidence, their passion, their happiness all just to feel better about themselves which is just cowardly. To make matters worse, the torment and harassment was not a one time offense but lasted over nine years! Since 2009 the harassment has taken its toll on the victims and they were never heard when they called for help.

The current issue at hand is that men were using social media to harass female journalists, female activists, people of color, and the LGBTQ community. Steps should be taken to resolve this problem, starting with the suspension of all the men in the group to allow for the launch of a formal investigation. Once that investigation has concluded, they should terminate those who participated in the harassment and suspend the members who did not join in. While the investigation is ongoing, the employers of the men should release formal apologies to all the victims to demonstrate how much they care for all those who had to face all the torment, as well as regret their actions.  The employers should revise their code of conduct to incorporate equality, cooperation, and communication as core values to avoid uncomfortable situations in work settings. Finally, they should implement a strict policy that will regulate and monitor all social media use for employees. The new mission statement for Liberation should include “We believe that creating a safe and welcoming environment for all employees best promotes and produces the highest quality of character and production.” This is how they will be able to limit any future issues of similar nature because they will have established a welcoming culture for their employees that promotes togetherness and equality.

To ensure ethical productivity, the companies should regulate and closely monitor all actions on social media to ensure that they are all acting appropriately. There should also be annual gender equality training and social media usage training to ensure that all employees are on the same page. When hiring new employees, the employers must be absolutely sure that any potential employee fits the culture they are trying to build that is centered around equality and teamwork. When promoting employees, high work performance and quality should always be the first requirement. When narrowing down groups of worthy employees, character traits should weigh heavy in consideration. Employees who do not buy into the culture and/or exhibit negative behaviors will be eliminated from promotion contention and in serious case, shall be terminated. To remedy the negative publicity that the newspapers received, there should be a focus on promoting work from females, writers of color, and LGBTQ writers to illustrate their emphasis of the importance of diversity and equality to the staff.

Chrisafis, Angelique. “French Media in Crisis as They Face Their Own #MeToo Moment.” The Guardian, Guardian News and Media, 15 Feb. 2019, www.theguardian.com/world/2019/feb/15/french-media-crisis-faces-own-metoo-moment-ligue-du-lol.

Posted by Connor Jameson at 5:36 PM